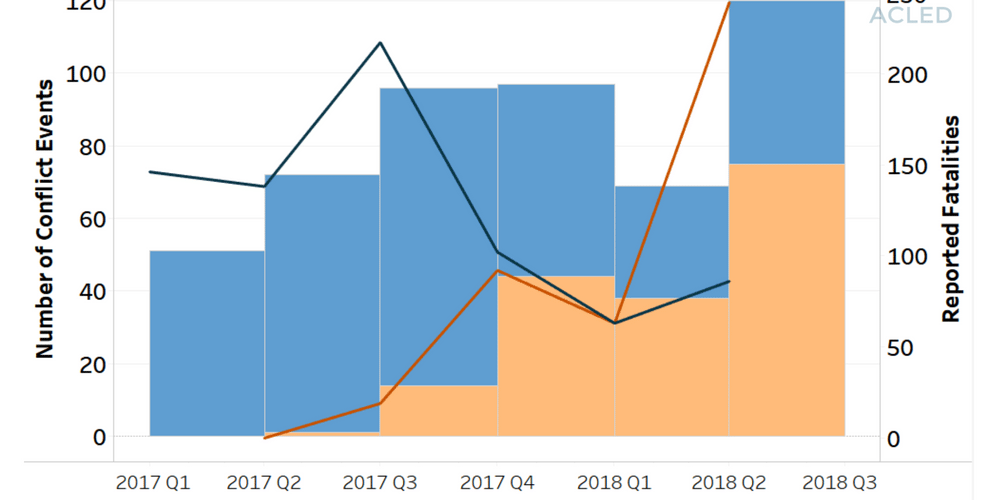 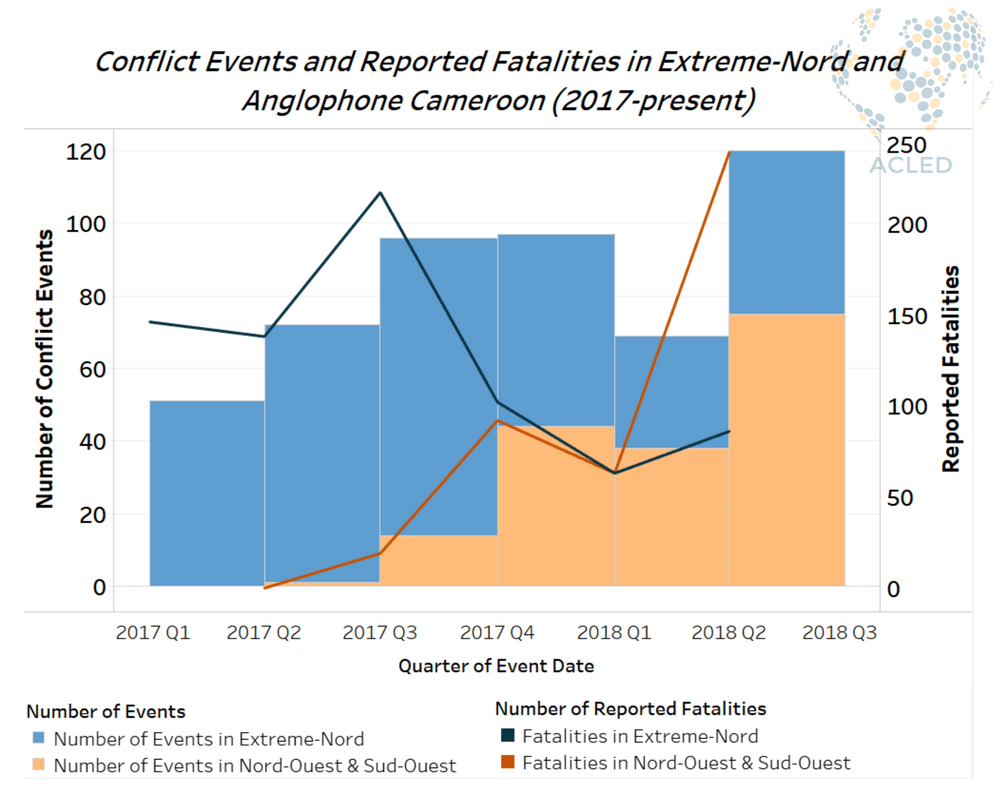 Boko Haram has operated in the Extreme-Nord region of Cameroon since 2014 (events and fatalities marked in blue on Figure 1). The Extreme-Nord region of Cameroon is a useful supply base for the Boko Haram militants operating in Nigeria. Boko Haram incidents in Cameroon are generally pillage-orientated “hit-and-run” attacks, targeting properties and livestock, rather than directly engaging security forces (ACLED, 2 March 2018). These incidents have more than halved, from 82 in the 3rd Quarter of 2017, to 31 in the 2nd Quarter of 2018.
However, as Boko Haram activity in the Extreme-Nord has decreased, overall conflict in Cameroon has increased, as the Ambazonian crisis playing out in the Nord-Ouest and Sud-Ouest regions has escalated (events and fatalities marked in orange on Figure 1). Anglophone Cameroonians, frustrated with being systematically marginalised in public institutions and state positions have been mobilising to create the Federal Republic of Ambazonia, a separate, English-speaking state. The separatists are increasingly targeting security forces, state authorities, schools and pro-regime politicians (Journal du Cameroun, 19 June 2018). There has been a heavy-handed response from the Cameroonian army. Security forces have chased separatist groups from village to village, causing heavy material damages and seriously hindering economic activities. Several thousands of civilians have reportedly taken shelter either in the bush, in the neighbouring Littoral region, or in Nigeria. There are also reports of mass executions by the military (Amnesty International, 12 June 2018).
In the 2nd Quarter of 2018 there were 239 reported fatalities in the Ambazonian regions of Nord-Ouest and Sud-Ouest, compared to only 86 in the Boko Haram region of Extreme-Nord (see Figure 1), so the Anglophone regions have become the primary political concern for the Cameroonian government and international interests. Both France and the USA have expressed concern about the situation, and made suggestions to the Cameroonian government. In June local civilians reported seeing white soldiers in Buea (AllAfrica, 1 July 2018), suggesting that French Special Forces are present in the region.
The Anglophone Crisis is particularly important to President Paul Biya as he approaches the October presidential elections. Biya, who has ruled Cameroon since 1982, is expecting to win the election. However, there are concerns about the viability of holding polls in the Nord-Ouest and Sud-Ouest regions, following the election violence during the senatorial elections in March, during which a number of polling stations were burned down in the Anglophone regions (Africa News, 12 July 2018). Biya’s legitimacy depends on his ability to manage the escalation of crisis in the Nord-Ouest and Sud-Ouest of the country.