Special Focus on Coalition Forces in the Middle East: The Saudi-led Coalition in Yemen 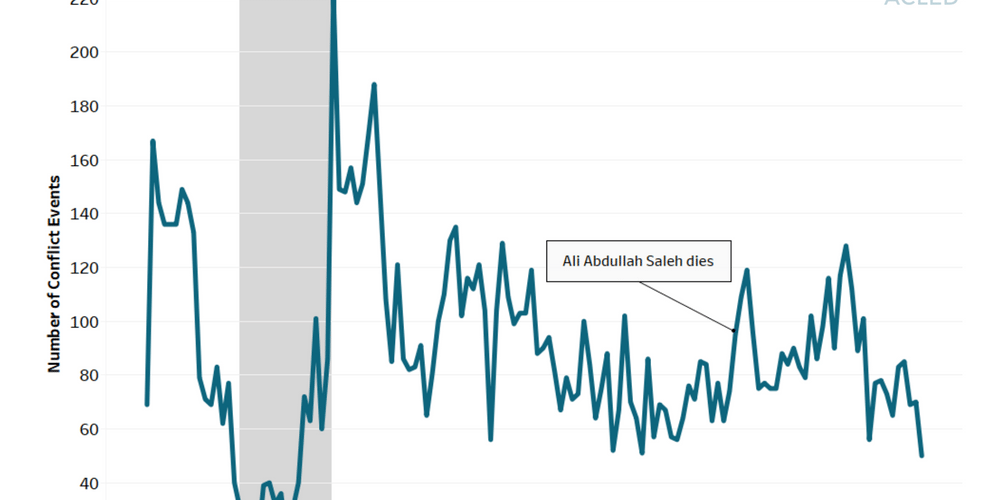 In March 2015, Saudi Arabia launched a military intervention in Yemen to restore the internationally-recognised government of President Abdrabbuh Mansour Hadi, ousted by the Houthis in February of the same year and forced to flee southwards to the port city of Aden. Prior to the intervention, President Hadi had called on the Arab League, the Gulf Cooperation Council (GCC), and the United Nations Security Council to take action against the coup orchestrated by Ansar Allah, a northern-based political group popularly known as the Houthi Movement that had captured the Yemeni capital Sana’a in September 2014 and was now besieging Aden.
In response to Hadi’s request, Saudi Arabia formed a coalition that included the state members of the GCC with the exception of Oman (United Arab Emirates, Bahrain, Kuwait and Qatar[1]), Morocco, Sudan, Egypt, Jordan, and Senegal. The participant countries have contributed to the Saudi-led intervention sending ground troops, warplanes, and warships. The coalition has enjoyed further logistical and military support from several Western countries – including the United States – as well as from neighbouring Eritrea, Somalia, and Djibouti, where coalition troops are being trained. ACLED has coded the operations conducted by the Saudi-led coalition in Yemen as “Operation Decisive Storm” and “Operation Restoring Hope”, which identify the codenames of the intervention between March and April 2015 and from April 2015 to the present, respectively.
ACLED data show that “Operation Restoring Hope” has figured as a primary actor of violence in Yemen in no less than 118 events per month. The Saudi-led coalition has been the single most active conflict actor in Yemen since January 2016, with a lull recorded during the 2016 peace talks in Kuwait and a renewed increase since the collapse of the Houthi-Saleh coalition in December 2017 (Figure 1). Approximately one out of ten events involving the Saudi-led coalition has resulted in the targeting of civilians, while around 75% of total civilian fatalities recorded by ACLED were attributed to the coalition: these figures qualify Operation Restoring Hope as the main perpetrator of violence against civilians in Yemen (Figure 2). 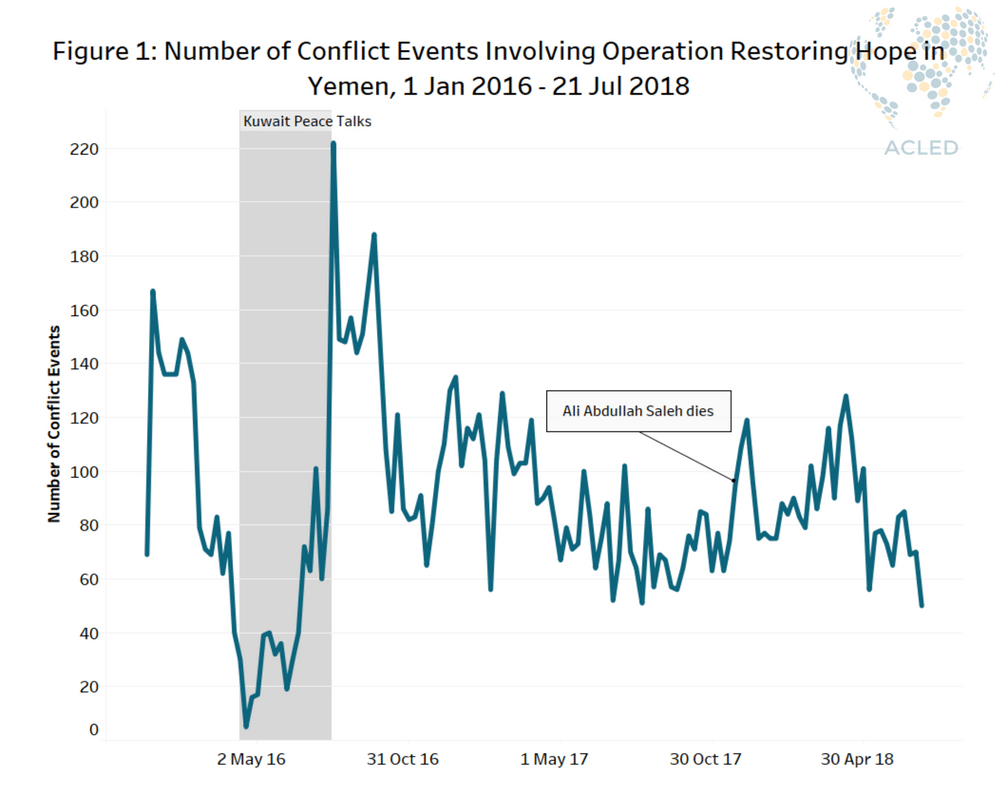 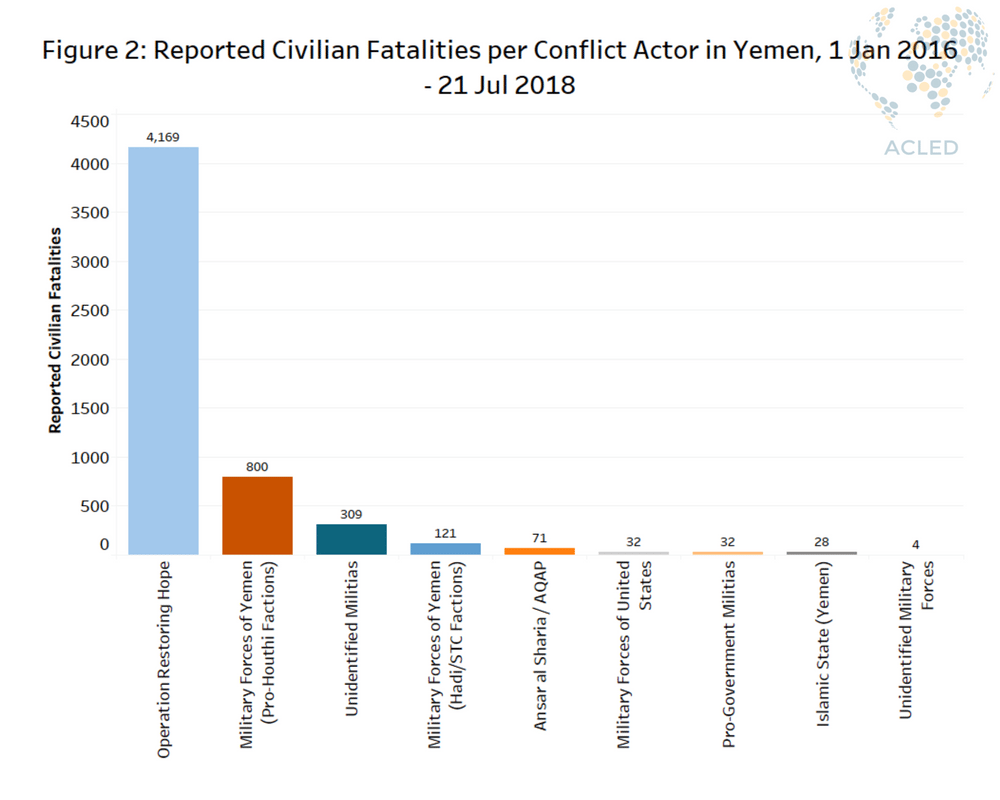 The combined use of Saudi cross-border artillery and airstrikes has been most lethal in the northern province of Sadah, which has resulted in the highest number (1,118) of reported civilian deaths since 2016. However, the recent escalation of the conflict along the western coast has caused a sustained increase in the number of non-combatants killed in Hodeidah and Hajjah: in Hodeidah, more than 40% of total civilian fatalities recorded since 2016 have occurred this year (Figure 3). 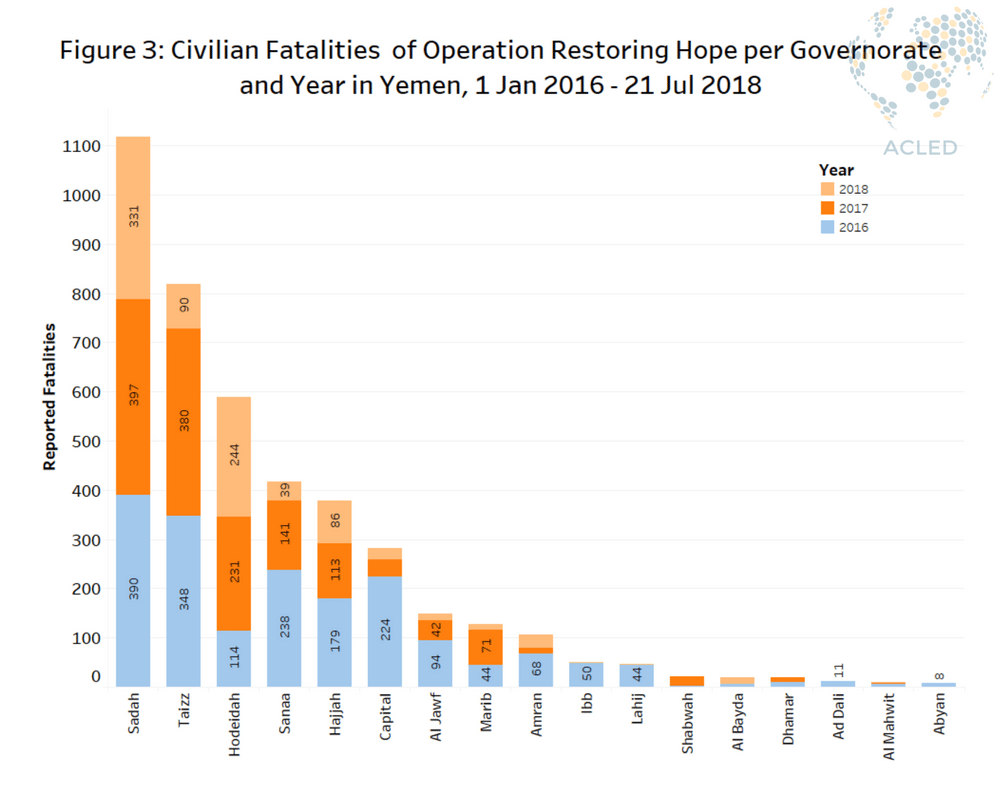 The coalition’s activity has also reflected the occasionally divergent political interests of the participant countries in Yemen. Saudi Arabia, which coordinates the intervention, has been responsible for the vast majority of the air and ground operations conducted by the coalition in Yemen, sustaining dozens of billions in war costs since 2015. Several hundreds of Saudi soldiers are also estimated to have died in fighting against the Houthis in Yemen and southern Saudi Arabia. Saudi troops have largely concentrated their activity in northern Yemen and along the border, although they have also operated in the south-eastern provinces of Hadramawt, Mahrah and Socotra (Figure 4).

The UAE has escalated its operations in Yemen since late 2015 and early 2016, when it started to establish military bases in Aden and to support the creation of local security forces in southern Yemen. While Saudi Arabia has traditionally been present in the north of the country, the UAE has been able to craft its sphere of influence in the south, sponsoring the creation of local security providers and pro-independence political bodies as well as actively opposing the forces loyal to the government of President Hadi in Aden and Socotra. UAE forces are also active in the coastal Tihama region, where a limited number of its special forces are supporting the offensive aimed at retaking the western port city of Hodeidah.
The other countries have been involved in lesser capacities. Kuwait, Bahrain, Morocco and Egypt have largely played an ancillary role, despite occasionally reporting fatalities in their ranks in the early stages of the intervention. By contrast, Sudan has been active on multiple war fronts: despite initial denial, Sudanese authorities confirmed to have deployed thousands of soldiers of its elite Rapid Support Forces to support military operations in the southern Saudi provinces of Asir and Jizan, in northwestern Yemen and along the western coastal plains. Sudanese troops, inadequately trained to fight in Yemen, have reportedly suffered hundreds of losses.
The protraction of Operation Restoring Hope has resulted in heightening tensions both inside Yemen and within the coalition. On the one hand, the military intervention has had a severe impact on the civilian population and infrastructure: the Saudi-led air campaign, often documented as indiscriminate and linked to several war crimes, has contributed to aggravating the humanitarian crisis. Local episodes of violence by coalition troops, including the rape of a young Yemeni girl by Sudanese troops in Hodeidah last March and the reported use of torture in UAE-administered prison facilities in southern Yemen, have raised concerns for the behaviour of foreign troops. Additionally, recent Saudi and Emirati aggressive behaviour in southern Yemen sparked protests in Aden, Mahrah, and Socotra, where the local populations and the Yemeni government have accused their virtual allies of acting as foreign occupiers.
On the other hand, coalition forces have increasingly found themselves at odds across Yemen. After suspending its participation to Operation Restoring Hope in the wake of the 2017 diplomatic crisis with its former allies, Yemeni and Saudi sources have repeatedly confirmed that Qatar is supporting the Houthis. Sudanese public opinion has also voiced doubts over the country’s participation in the Saudi-led military campaign. In eastern Mahrah province, Saudi military build-up and support for Salafists is a potential source of tensions with neighbouring Oman. In addition to the recent standoff in the island of Socotra, Saudi Arabia and the UAE continue to support rival factions across southern Yemen, encouraging a possible violent competition between local armed groups. Whilst the Saudi-led coalition is often assumed to be operating firmly to restore the government of President Hadi, its internal contradictions are likely to hamper the success of Operation Restoring Hope and have a lasting legacy on Yemen’s already complex conflict environment.
Find an explanation of ACLED’s methodology for monitoring the conflict in Yemen here.
This piece is part of a special series with a focus on coalitions in the Middle East. For more information about the series, please refer to Special Focus on Coalition Forces in the Middle East.
[1] Qatar’s participation was suspended in June 2017, following the escalation of a diplomatic crisis with Saudi Arabia, UAE, Bahrain and Egypt.