Homemade Resistance: The Popular Response to the Difficulties of Life in Gaza 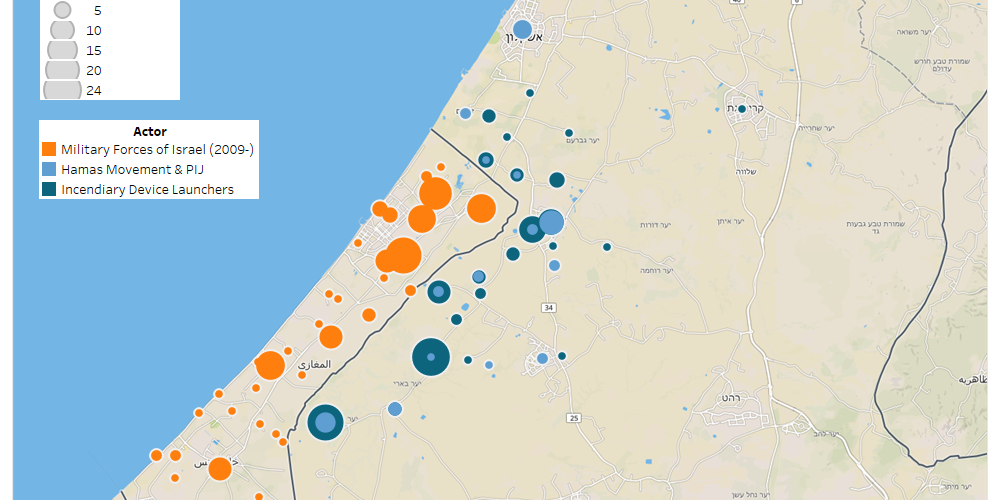 The recent conflict activity on the Gaza border can be characterized by its lack of affiliation to armed groups in Gaza and by the use of homemade and/or found weapons (i.e stones and Molotov cocktails, either thrown or attached to balloons or kites). These unaffiliated actors are responding to their daily conditions, which are punctuated by food shortages, electricity cuts, unemployment, and violence because of Israel’s blockade of Gaza. While diplomatic efforts are important for durable peace, a ceasefire agreement to prevent incendiary devices from being launched into Israel will only be sustained if living conditions in Gaza improve.
When ceasefire negotiations are discussed in the media, they refer to talks between Israel and either Hamas or the Palestinian Authority. However, it appears that Hamas has taken a secondary role in regional conflict events since March 30 (see Figure 1[i]). The primary actors in Gaza are unaffiliated demonstrators and people outside of demonstrations who launch airborne incendiary devices. These individuals may have varying personal and political relationships to armed groups, but in these activities they are not claiming to be affiliated with any group and, more importantly, are not clearly organized by one. Many armed groups, including Hamas, have openly supported and encouraged the weekly Friday demonstrations, but they are not organized or armed by Hamas. 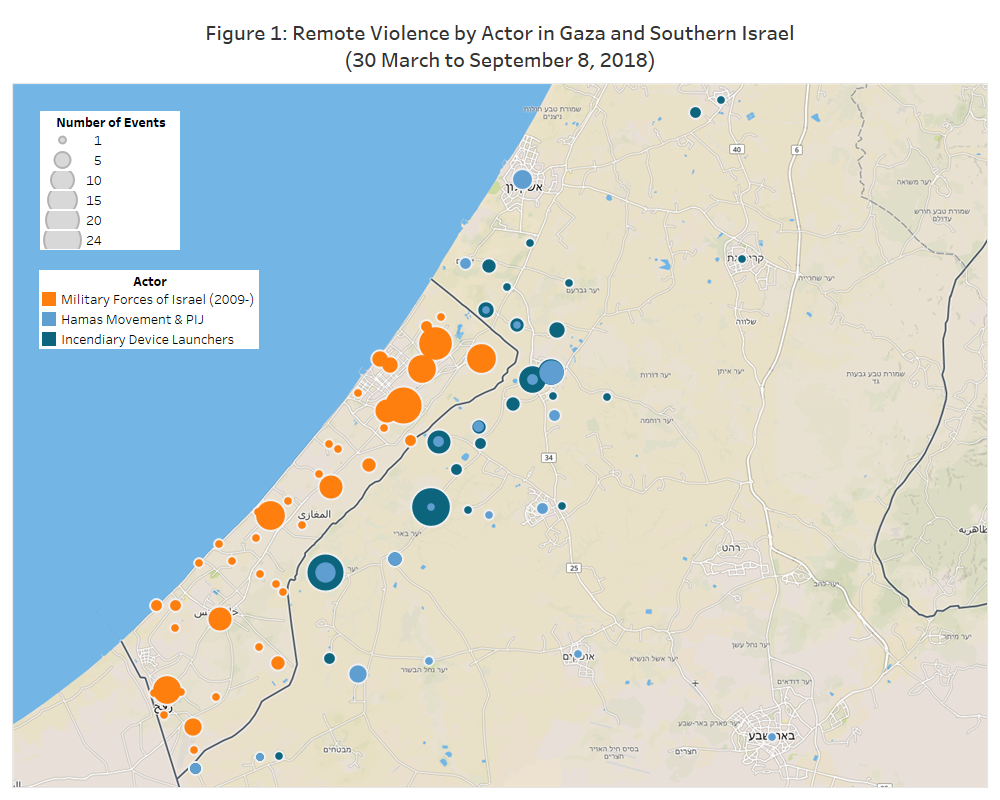 One of the main features of the ongoing conflict has been the use of incendiary devices: Molotov cocktails or makeshift explosives tied to balloons or kites and flown across the border into southern Israel. These crude devices have caused damage to over 7,000 acres of land and are a major topic of ceasefire negotiations. Many of the Israeli airstrikes in Gaza have targeted people launching these devices. Figure 2 shows the percentage of remote violence attacks conducted by each actor. Military forces of Israel and incendiary device launchers are responsible for the vast majority of remote violence events, while Hamas and Palestinian Islamic Jihad (PIJ), a similar but more radical armed group, are responsible for a minority of these events. 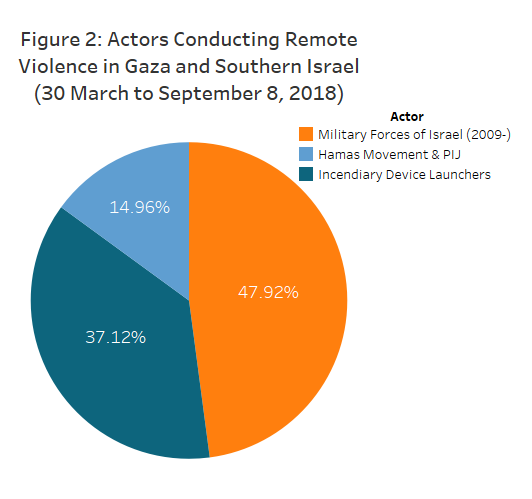 It is questionable whether Hamas is even capable of stopping the spontaneous violence occuring along the border. Mounting frustration at living conditions in Gaza continues to fuel participation in demonstrations and the launching of incendiary devices despite frequent use of lethal force by Israeli forces. Gaza has been under land, air, and sea blockade since 2007, which severely restricts the movement of people, accessibility of fuel, medical supplies, and construction materials, among other resources. Unemployment stands at around 40 percent, and prospects of improvement are dim (PBS, 15 May 2018). The sea is a major resource for Gaza and fishing is one of the few jobs available. However, fishermen are only able to go 6 nautical miles out to sea and are fired at by Israeli forces on a near daily basis (OCHA, 5 April 2018). Gaza has been described as “the world’s largest open-air prison” and “unbearable,” and the UN has projected it will be “unlivable” by the year 2020 (NRC, 26 April 2018). The relative calm at the end of August appears to be related to a general decrease in armed conflict events by all parties (see Figure 3). Yet, over the last week, as ceasefire negotiations deteriorated and the Trump administration announced it would be ending funding to the United Nations Relief and Works Agency (UNRWA) and expelling the Palestine Liberation Organization (PLO) from Washington, DC, the relative period of calm was ended with riots, incendiary device launches, and Israeli airstrikes. UNRWA provides assistance, including healthcare and education, to 70% of people in the Gaza Strip (UNRWA, Gaza). Israel is now searching for ways to compensate for the UNRWA deficit to avert war in the south (Times of Israel, 9 Sept 2018). As the situation continues to deteriorate in Gaza, there is little hope for a lasting ceasefire. 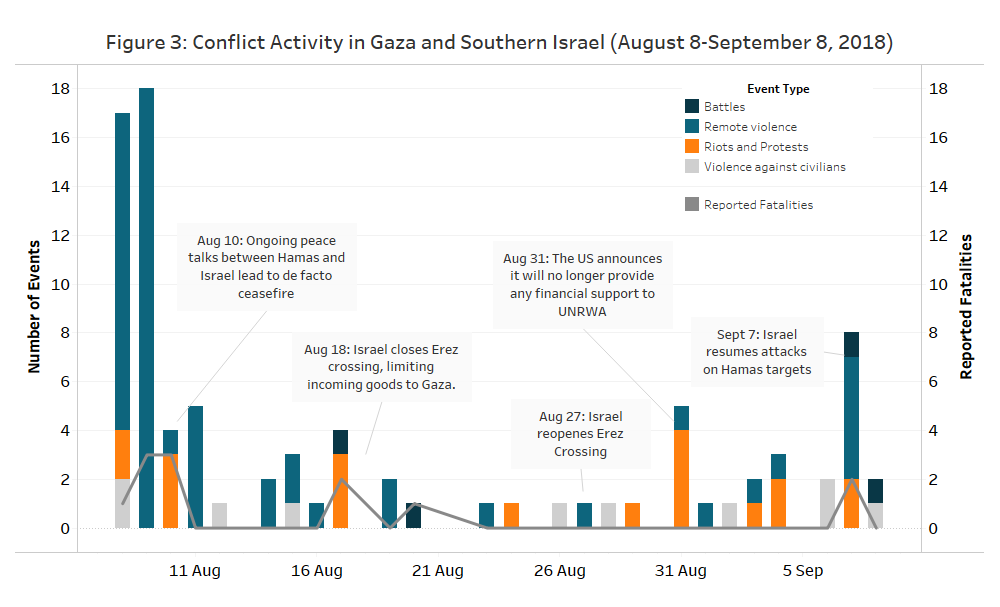 [i] Due to the format of ACLED data files, the perpetrating actor(s) of events may not be apparent in all situations. For best results when visualizing the data as it appears in Figures 1 and 2, refer to the event notes and manipulate the actor columns as needed for your analysis.