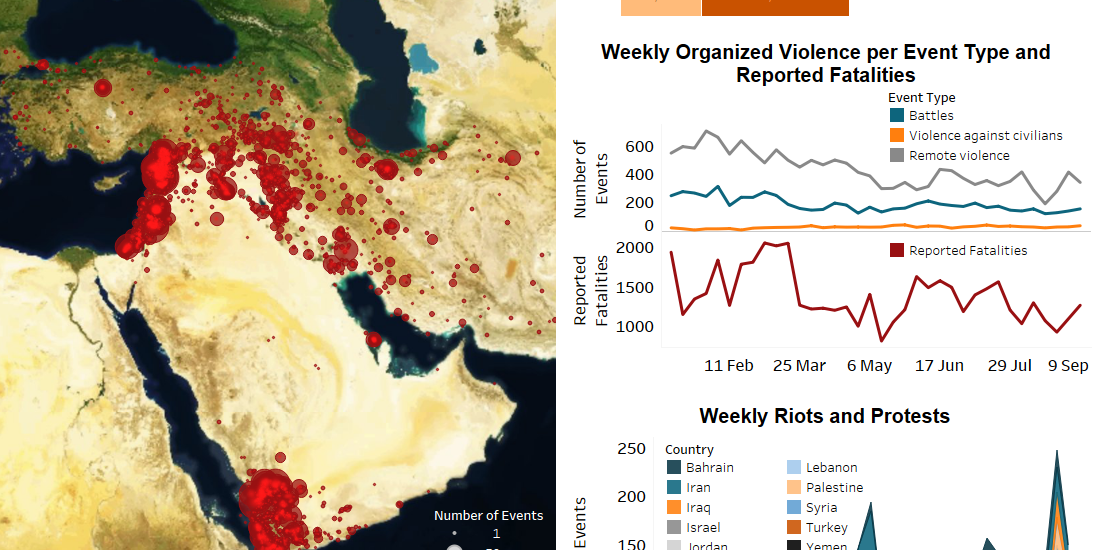 Iraqi Kurdistan and adjacent Kurdish regions were the site of increased activity last week as both Iran and Turkey continued to attack alleged enclaves of Kurdish rebels in the governorates of Erbil and Dahuk. In both Iraq and Iran, demonstrations were held by Kurds against these and other actions. Meanwhile, unrelated demonstrations continued throughout the Middle East, most noticeably in northwest Syria, where locals fear an upcoming regime offensive. In Yemen, fighting continues in several areas following the collapse of the Geneva talks earlier in the month.
In Palestine, riots and protests continued last week along the Gaza border. During the weekly Friday demonstrations, 3 Palestinian demonstrators were reportedly shot dead by Israeli forces, making it the most fatal day in recent weeks. This continues the trend of the increased use of force by the Israeli military in Gaza following American diplomatic moves against Palestine. Last week, the Palestinian Liberation Organization (PLO) offices were ordered closed in Washington, DC (Washington Post, 10 Sept 2018).
In Iran, labour and economic demonstrations continued throughout the country, while a general strike was observed by merchants and shopkeepers in at least 19 Kurdish cities and towns in the provinces of Kordistan, Kermanshah, and West Azarbaijan. The strike was called by five Iranian-Kurdish parties in a show of unity in response to Iran’s missile attacks on the headquarters the Democratic Party of Iranian Kurdistan (PDIK) in Koysinjaq, Iraqi Kurdistan Region, on 8 September, as well as the execution of six Kurds on the same day (CHRI, 14 Sept 2018). Iranian authorities arrested at least 17 Kurdish activists for their involvement in the strike.
Meanwhile in Iraq’s Kurdistan region, Iranian military forces continued to shell parts of the Jabal Biradawst region of Erbil governorate, reportedly targeting PDIK members. The shelling has forced some 200 Iraqi Kurdish families to flee their homes, although no casualties were reported. The previous week, Iranian and Iranian-linked buildings were targeting during violent demonstrations in Basrah governorate of Iraq. Throughout the demonstrations, which have thus far marked post-war Iraq, we see a disdain for Iranian interference in the country’s operations.
Turkey as well has consistently targeted its own Kurdish rebels in northern Iraq. Air and artillery strikes continued last week on Kurdistan Workers Party (PKK) targets in both Erbil and Dahuk governorates of Iraqi Kurdistan. In the southeast of Turkey, battles between Turkish military forces and PKK militants continued as well, including in the typically peaceful provinces of Igdir and Giresun.
In Istanbul, a large protest by airport construction workers was staged in Arnavutkoy district over several days against poor wages, accommodations, and other services. Police dispersed the protest and detained several of the demonstrators. A solidarity protest in Kadikoy district by hundreds of people was met with a similar police reaction.
In Yemen, military operations continued in Hodeidah governorate after the collapse of the Geneva talks in early September. The National Resistance Forces, commanded by the Giants Brigade, have advanced towards the port city of Hodeidah along the Sana’a-Hodeidah road, taking over the strategic Kilu 16 junction. Coalition forces continued to support the operations, with several airstrikes reported in the area and in neighbouring districts. Intense fighting also continues along the battlefronts in Sa’dah, Al Bayda, Ma’rib, and Al Jawf governorates, while a suspected US drone strike killed four Al Qaeda militants in Abyan, including a commander known as Sameh al Marmi. Meanwhile, in Aden, two security officials were targeted in separate assassination and kidnapping attempts.
In Syria, the remaining areas under rebel control in northwest Syria were the site of massive protests last week against the potential regime/Russian offensive targeting the last stronghold of the rebel factions in Idleb. The 14 Sept protests took place in at least 77 locations throughout northwest Syria, and featured at least 25,000 people – although unconfirmed or non-specific sources have placed both those numbers much higher (Shaam, 15 Sept 2018).
Meanwhile, in the east of the country, Syrian Democratic Forces and the Coalition announced the beginning of operations against IS fighters in the Hajin area, the aim of which is to gain control of the last IS enclave on Deir ez-Zor governorate’s eastern bank of the Euphrates. Clashes took place along the front lines of the enclave between both sides, however no advances were reported.
Lastly, Israeli airstrikes reportedly hit Iranian targets in Syria for the second week in a row, including an Iranian weapons shipment at the international airport of Damascus. 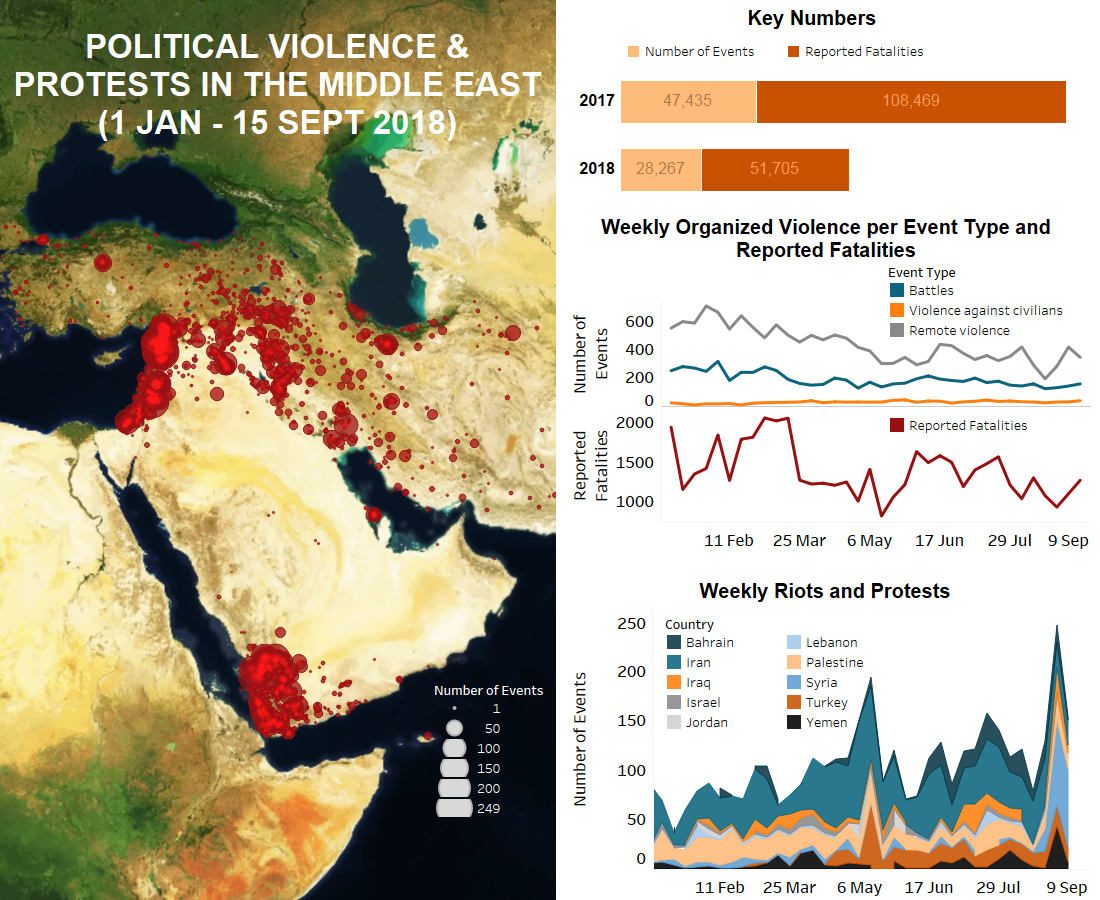 Tom Hart is the Global Research Coordinator with ACLED, and a part-time brewer and genealogist. He received his BA in International History from Carleton University in Ottawa, where he focused on colonial relationships, intercultural interaction, and geocultural perspectives. Tom is currently based out of Ottawa, Canada, and is fluent in English and French.
18 September 2018
Share
TweetShare on Twitter Share on FacebookShare on Facebook Share on LinkedInShare on LinkedIn