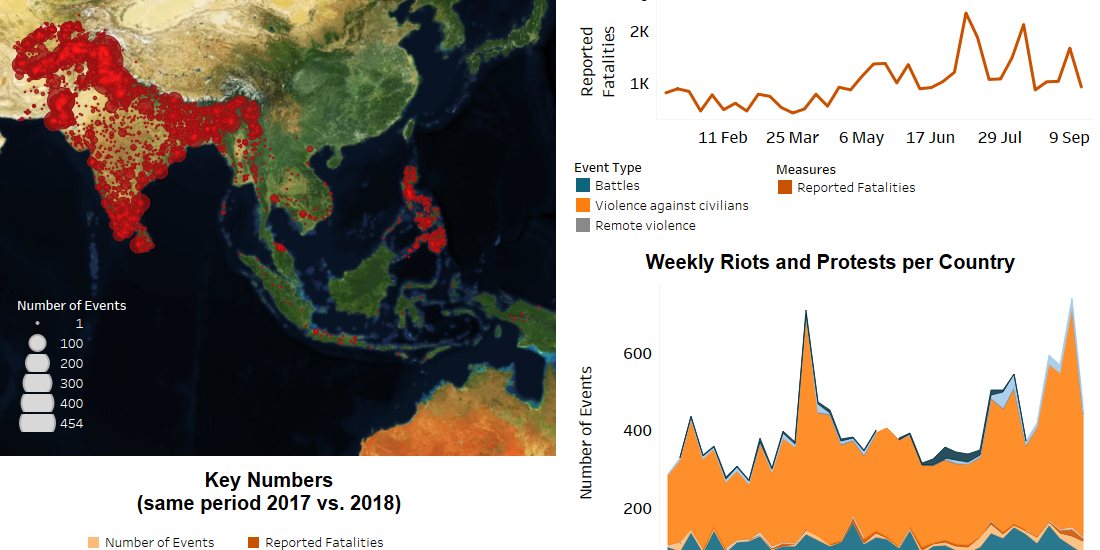 Overall levels of organised violence and demonstrations declined across the South and Southeast Asian regions last week compared to the previous week.
In Afghanistan, violence between Afghan security forces and both Taliban and Islamic State (IS) fighters continued across the country, particularly in the provinces of Nangarhar, Kunar, and Helmand. Concerning IS, there was a significant increase in Afghan security operations targeting the group’s hideouts in the West. Fighting between Taliban and IS fighters was also reported in the Dara i Pech district of Kunar. Meanwhile, civilian casualties increased last week as well. At least 64 civilians were reportedly killed, and dozens injured, with 31 of those fatalities occurring as a result of Afghan security operations in Nangarhar province. In Chamkani district of Paktia province, a NATO airstrike reportedly killed three civilians and injured ten more.
In Pakistan, several militant activities were reported last week. In two separate attacks, unidentified gunmen reportedly shot dead three Levies personnel in Qila Saifullah town of Balochistan Province. On 22 September, Pakistani government forces engaged in a lethal firefight with suspected Afghan militants in North Waziristan District, Khyber Pakhtunkhwa Province, leaving 9 militants and 7 soldiers reportedly dead. In contrast, 250 militants belonging to a number of Baloch separatist groups turned over their arms and surrendered peacefully in Quetta on 18 September.
With regard to protests in Pakistan, locals took to the streets to protest shortages in the supply of water particularly in Dadu and Mirpur Khas Districts of Sindh Province. Additionally, long-running tensions over a controversial plan to build the Kalabagh Dam on a part of the Indus River in Punjab Province led to an eruption of anti-dam protests across Sindh Province by lawyers, fishermen, and some political parties. One pro-dam protest march was reported in Jaranwala city in Punjab Province.
In India, suspected Hizb-ul-Mujahideen (HM) and Lashkar-e-Taiba (LeT) militants targeted off-duty servicemen at their homes, reportedly killing three policemen and one army soldier. Another serviceman was reportedly killed and his body was found with a slit throat following an exchange of fire between Indian and Pakistani forces along the International Border (IB). Following these latest casualties, a planned meeting between Indian and Pakistani foreign ministers at the United Nations General Assembly in New York was called off (The Guardian, 21 Sep 2018). The Indian government also denied reports over the resignation of a number of policemen in light of the attacks (The Times of India, 21 Sep 2018).
Furthermore, sporadic incidents of violence and skirmishes–mainly between Indian National Congress (INC) and Shiromani Akali Dal (SAD) groups–were reported from several districts of Punjab state during the Parishad and Panchayat Samiti (district council and village government) elections. Based on allegations of political activists capturing polling booths, the State Election Commision called for re-polling in several locations (Chandigarh Tribune, 19 Sep 2018).
In Bangladesh, student protests over quota reforms in public services resurged last week. Students took to the streets and demanded that the government publish a gazette notification on the demand that reservations for government jobs be abolished.
In Nepal, the ongoing protest movement demanding justice for the rape and murder of Nirmala Panta did not abate and a high number of demonstrations was reported across the country. In addition, Constitution Day was celebrated in the country with activists in selected provinces protesting and calling it a “Black Day.” On 20 September, unidentified gunmen shot dead a school committee chairman who was later revealed as a ringleader of Indian Mujahideen, allegedly responsible for several bombing incidents in India (The Indian Express, 24 Sep 2018).
Meanwhile in Sri Lanka, demonstrations were held over multiple issues ranging from access to resources to the release of prisoners. One fatality was reported last week when an army man was stabbed dead while on duty inside a guard post at the Ambepussa Army Camp on 21 September.
In Myanmar, in Yangon, a peaceful protest was held demanding the release of two Reuters journalists imprisoned for their reporting on the Myanmar military’s violence against Rohingya villagers in Rakhine state. Several labour protests occurred last week as well. Workers protesting labour conditions at the Fu Yuen garment factory in the Yangon region passed the one-month mark; there were also labour protests in the Mandalay region. In Rakhine state, around 200 farmers staged a protest calling for the return of land confiscated during the military dictatorship. In Shan state, many people demonstrated for the release of a Shan woman detained by the Ta’ang National Liberation Army (TNLA) in August.
In Indonesia, demonstrations in North Sumatra turned violent when pro- and anti-Jokowi groups clashed. Both groups clashed with the police once they intervened, leaving several activists and police injured.
In Thailand, on 19 September, a policeman was reportedly killed when his car was ambushed by suspected separatists in Yala.
In the Philippines, state forces and the New People’s Army (NPA) clashed eight times, resulting in the reported fatalities of two NPA leaders, one marine and one police officer. Drug violence too continued throughout the week. Protests against the Duterte government spread nation-wide on the 21 September anniversary of Ferdinand Marcos’ 1972 proclamation of martial law, marking the beginning of a period of dictatorship in the country that lasted until 1986. 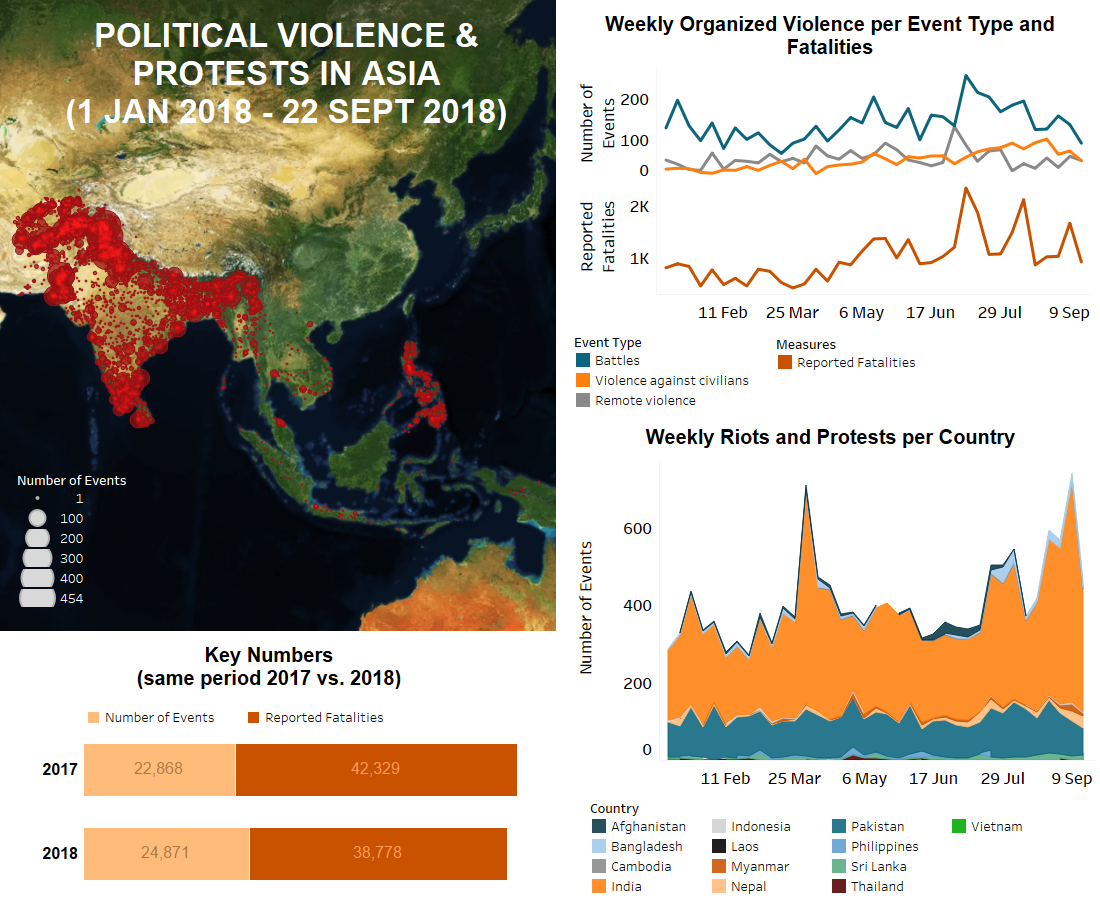 Daniela Pollmann is ACLED's Program Coordinator. Ms Pollmann holds a MA in Conflict, Security and Development from the University of Sussex with focus on peace processes. She has previous work experience in the social sector in Uganda and India where her work focused on women empowerment, child protection and anti-human trafficking. She is currently stationed in New Delhi, India.
Elliott Bynum

Tom Hart is the Global Research Coordinator with ACLED, and a part-time brewer and genealogist. He received his BA in International History from Carleton University in Ottawa, where he focused on colonial relationships, intercultural interaction, and geocultural perspectives. Tom is currently based out of Ottawa, Canada, and is fluent in English and French.
27 September 2018
Share
TweetShare on Twitter Share on FacebookShare on Facebook Share on LinkedInShare on LinkedIn