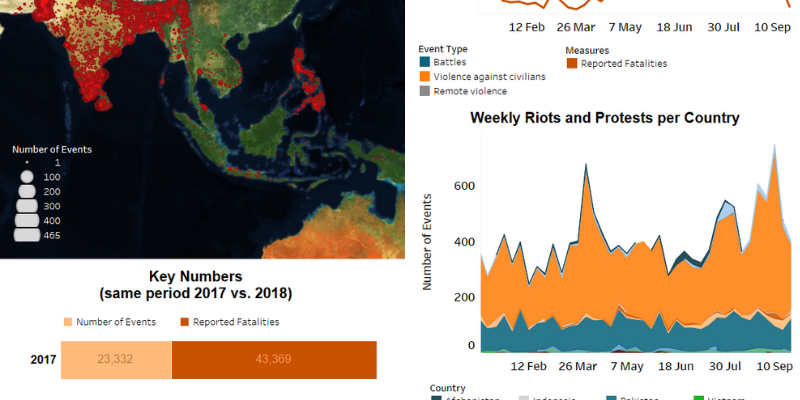 Overall levels of organised violence and demonstrations continued to declined across South and Southeast Asia, with the exception of in Pakistan where the number of reported demonstrations increased by over 70%.
In Afghanistan, at least two parliamentary candidates were targeted last week by unidentified militants in Kandahar and Khost city, signalling the likely beginning of increased violence leading up to the 20 October election. Meanwhile, at least 25 civilians have been reportedly  killed in two separate airstrikes conducted by Afghan military forces in the districts of Tagab and Jaghatu, although the numbers are fluctuating. Four more civilians were reportedly killed in a military operation in Kunduz province. Civilian casualties like these are often initially denied by government officials as they attempt to maintain the support of the population.
In Pakistan, several isolated militant attacks were reported from Balochistan and along the border with Afghanistan in Khyber Pakhtunkhwa. In Balochistan, unidentified militants attacked a pro-government tribal militia camp in Dera Bugti district and Pakistani security forces reportedly killed militants they described as belonging to Lashkar-e-Jhangvi (LeJ) and the Islamic State in areas of Kalat district. In Khyber Pakhtunkhwa, militants from Afghanistan killed a security personnel in North Waziristan district.
Continuing from the previous week, several demonstrations were held in Sindh and Khyber Pakhtunkhwa provinces relating to the issue of the construction of dams along the Indus River. Last week, however, more political parties got involved with the Sindh Taraqi Pasand Party (STPP), Qaumi Awami Tehreek (QAT), and Pakistan Awami Tehreek (PAT) protesting against the proposed dams.
In India, a spike in fatalities was reported from Jammu & Kashmir with 11 militants and two soldiers reportedly killed in clashes. In addition, government forces were implicated in the fatal shootings of two civilians, and militants allegedly executed a suspected police informant. The killing of a civilian by state forces during a Cordon and Search Operation (CASO) in Srinagar city prompted the Joint Resistance Leadership (JRL) to call for a shutdown and demonstrations across the Kashmir Valley. With only one recorded firing incident, cross-border firings between Pakistani and Indian forces decreased last week compared to the week prior.
Another militant-related civilian casualty was recorded in the Indian state of Andhra Pradesh where Maoist rebels allegedly killed two Telugu Desam Party (TDP) lawmakers over securing a mining lease.
Several protest movements were reported from the state of West Bengal. Indigenous people belonging to Adivasi organizations staged demonstrations and blocked railway tracks and roads in several places, demanding the recognition of the Santhali language at the university and school level. In addition, the Bharatiya Janata Party (BJP) called for a statewide bandh in West Bengal on 26 September, in protest against the killing of two youths on 20 September, during a clash with police in Islampur area. There were reports of violent episodes in several districts, as BJP supporters clashed with members of the All India Trinamool Congress (TMC) party and state police forces.
In Bangladesh, journalists and other groups took to the streets across the country, demanding a repeal of the Digital Security Act. Critics say that the bill – which was passed by Bangladesh’s Parliament on 19 September – further limits the constitutionally protected freedom of speech (Financial Post, 28 September 2018).
In Nepal — in addition to ongoing anti-rape protests — a series of demonstrations were held by locals in the cities of Dhangadhi and Dipayal to express their opposition over the Province Assembly’s proposal to shift the Province 7 capital from Dhangadhi (the current temporary capital) to Godawari (The Rising Nepal, 28 September 2018).
In Myanmar, organised violence and demonstrations decreased slightly. The Arakan Army clashed with the Myanmar military twice last week in Paletwa township, Chin state, resulting in several reported fatalities. In Sittwe, Rakhine state, an off-duty corporal in the Myanmar army was reportedly shot and killed by an unknown assailant. Labour protests continued in the Yangon region as workers from several factories demonstrated together in solidarity with the workers from the Fu Yuen garment factory. Workers have been protesting in front of the Fu Yuen garment factory for over a month.
There were likewise several protests across Indonesia last week. Hundreds of survivors of the past month’s earthquakes staged a protest in front of North Lombok’s regent’s office demanding the office fulfill the central government’s promise of housing construction funds (The Jakarta Post, 28 September 2018). On 28 September, a major earthquake struck the city of Palu, on the island of Sulawesi, followed by a tsunami, reportedly killing several hundred people and leaving many displaced (The Guardian, 01 October 2018).
While reported drug-related killings in the Philippines continue, there was a decrease in the number of reported clashes between state forces and rebel and militia groups last week. On 27 September, the military and the New People’s Army (NPA) clashed in Sorsogon province, resulting in the reported deaths of three NPA members.
In Thailand, suspected Muslim separatists in the south continued to launch attacks against state actors. In Pattani, an assistant village head was reportedly shot and killed by suspected Muslim separatists. Also, in Pattani, protesters and counter-protesters demonstrated on the campus of Prince of Songkla University over the imposition of martial law in Nong Chik district. Martial law was imposed earlier in September following the killing of two rangers by suspected separatists (The Bangkok Post, 25 September 2018). 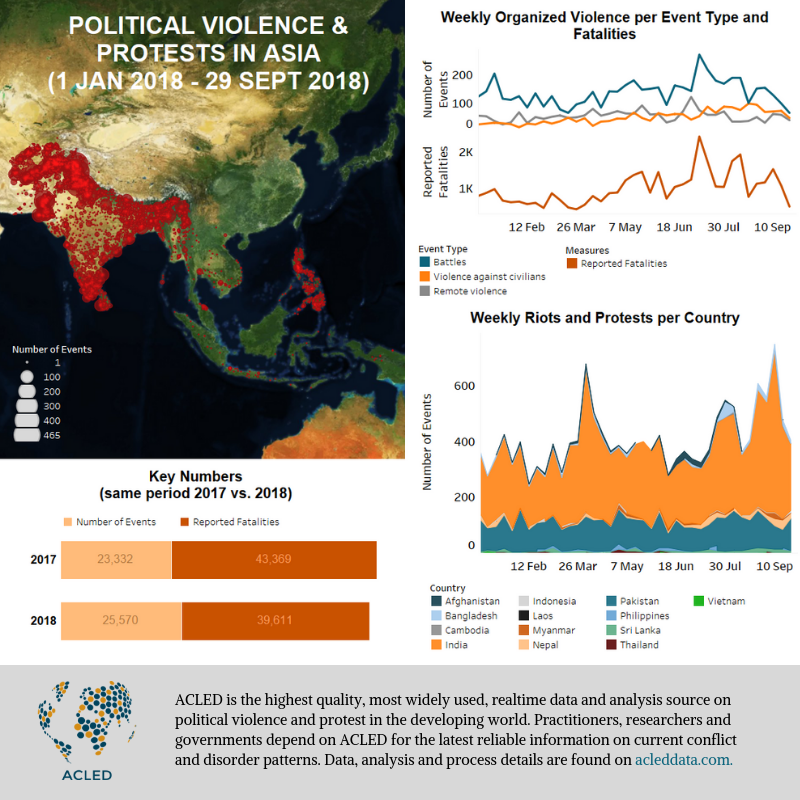