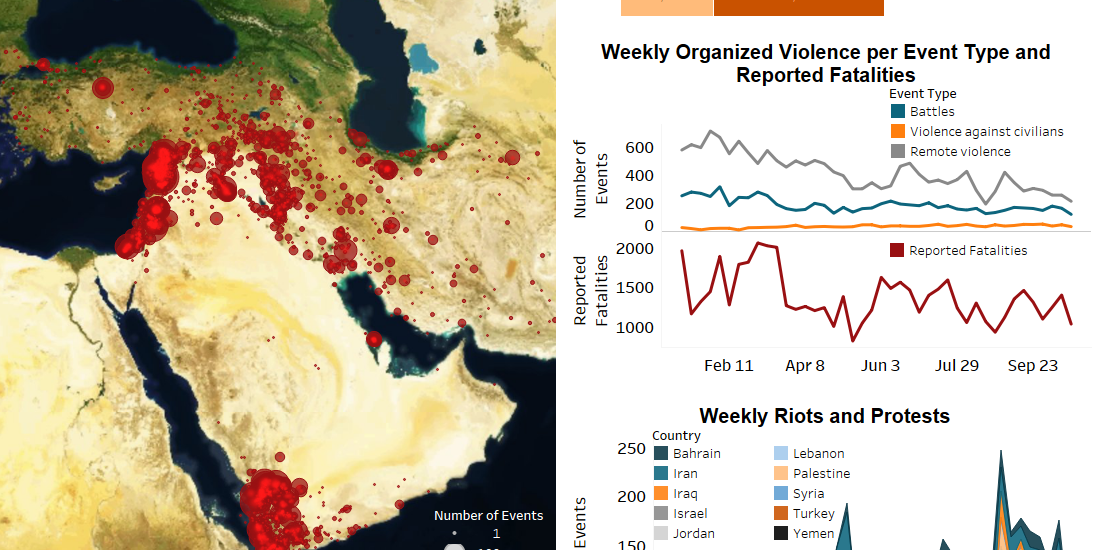 Throughout the Middle East region last week, there was a downward trend in instances of both armed conflict and demonstrations – with the exception of Israel/Palestine, where there was a significant increase in cross-border violence. In Lebanon, Jordan, and Iran, isolated events occurred which may lead to further violence, while in Iraq and Turkey, armed insurgencies continued but at a reduced rate. In Yemen and Syria, fighting continued, however the battlegrounds have remained relatively unchanged since the week prior.
In Israel/Palestine, the most significant escalation in cross-border violence since August took place along the Gaza border last week. Overnight from Friday to Saturday, Palestinian Islamic Jihad (PIJ) fired over 30 rockets into Israel, and the latter responded with at least 95 airstrikes into Gaza. While some of the exact locations of these rocket attacks and airstrikes were recorded, most were not. It was reported that Hamas had reached a deal with Israel through the Egypt-mediated talks before the volley of rockets was launched by PIJ – although it was not a ceasefire but rather an agreement to stem violence by rioters and the launching of makeshift incendiary devices along the border (Times of Israel, 26 Oct 2018). On Saturday October 27, PIJ announced that it had also reached a ceasefire agreement with Israel through the Egypt-mediated talks (Al Jazeera, 27 Oct 2018). This raises questions concerning the division between Hamas and PIJ. It also indicates that PIJ may be establishing itself as a political actor rather than simply an insurgency group.
In Lebanon, clashes in the Mieh Mieh Palestinian refugee camp continued intermittently throughout last week between the Fatah and Ansar Allah armed groups, although no additional fatalities were reported. While the Lebanese Army appears to still be deployed in some areas of the camp, they may be less able to intervene than it appeared the week before when they originally entered the Palestinian security zones within the camp. They have been making their way slowly into areas being vacated by both armed groups, although there is resistance (Albawaba, 25 Oct 2018). So far the Army’s presence has not lead to violence between security forces and militant groups, which had been a concern.
In Jordan, the former head of counter-terrorism was reportedly shot dead in front of his house in Madaba on October 23. Police have yet to confirm whether the shooting was related to his former position, and the person or group responsible remains unknown as well.
In Amman, protests on both October 19 and 20 demanded that Jordan not renew aspects of the 1994 agreement which leased two border territories to Israel. Following this pressure, King Abdullah announced on October 21 that Jordan would reclaim the territories once the agreement expires next year (Telegraph, 21 Oct 2018).
In Iran, new information has emerged concerning the October 16 abduction of at least 12 security personnel from a border post in Lulakdan, near Pakistan, by the Sunni Baluch armed group Jaish al-Adl. A statement from the Revolutionary Guards said that the soldiers were kidnapped after being made unconscious with food poisoning, and that this was done by a single infiltrator from Pakistan. Iran warned Pakistan that if it does not confront the militants involved in cross-border attacks, Tehran will target bases inside the country (Asia Times, 25 Oct 2018).
Furthermore, labour demonstration over unpaid salaries continued throughout Iran. Last week, there were demonstrations by students in several Iranian cities over different issues. Among these was a protest by students at Azad University in Tehran condemning the morality police after a video was posted on social media. The video showed police almost running over a female student who had tried to stop them from driving away with several women arrested over the improper wearing of the hijab (Albawaba, 28 Oct 2018).
In Bahrain as well, peaceful protests and rioting continued. Some of the demonstrations were related to the ongoing Shiite-led February 14 agitation, while others were to call for a boycott of the upcoming elections.
In Iraq, general violence appears to be down, however attacks by Islamic State (IS) and battles between the group and Iraqi security forces continued. In Al Qayyarah town, an IS car bomb attack reportedly killed 6 people (civilians and soldiers) and wounded 40 others on October 23 (Rudaw, 23 Oct 2018).
In Turkey, violence between the Turkish security forces and members of the Kurdistan Workers Party (PKK) has also lessened over the past few weeks. This is possibly due to adverse weather conditions in the mountainous southeast, where seasonal patterns of violence are typically observed.
Meanwhile in Yemen, intense clashes were fought between Al-Houthi forces and coalition-backed anti-Houthi militias for control of the strategic Kilu 10 and Kilu 16 areas on the outskirts of Hodeidah port city. Total fatalities remain unclear, however hospital sources estimate that at least 72 Al-Houthi militiamen were killed during the battles. Elsewhere in Hodeidah governorate, a Saudi-led coalition airstrike on a market in Bayt Al-Faqih reportedly killed at least 20 civilians, sparking a protest within the city against the coalition’s use of airstrikes.
Further battles were fought for control of Jabal Marran, Sadah governorate, as pro-Houthi forces attempted a counterattack. Finally, IS fighters engaged in short clashes with both Al-Houthi forces and Al-Qaeda militants throughout the week.
In Syria, clashes between Syrian Democratic Forces (QSD) and IS militants continued in the latter’s last enclave of Deir ez-Zor, with reports of QSD forces seizing control of Sosa village located in the southern part of the Hajin enclave. On the other hand, it appears that IS fighters are already regaining ground through successful counter-attacks this week. Elsewhere in the governorate, IS fighters attacked regime military positions between Mayadeen and Deir ez-Zor city on the western bank of the Euphrates river. In the meantime, Iranian forces and their affiliates have increased their presence in the Al-Mayadeen and Abu Kamal areas, although they have yet to begin any specific operation.
Lastly, regime forces, as well as rebel and Islamist factions, engaged in both one-sided and exchanges of shelling in the city of Aleppo and its outskirts, as well in areas of the Lattakia countryside. 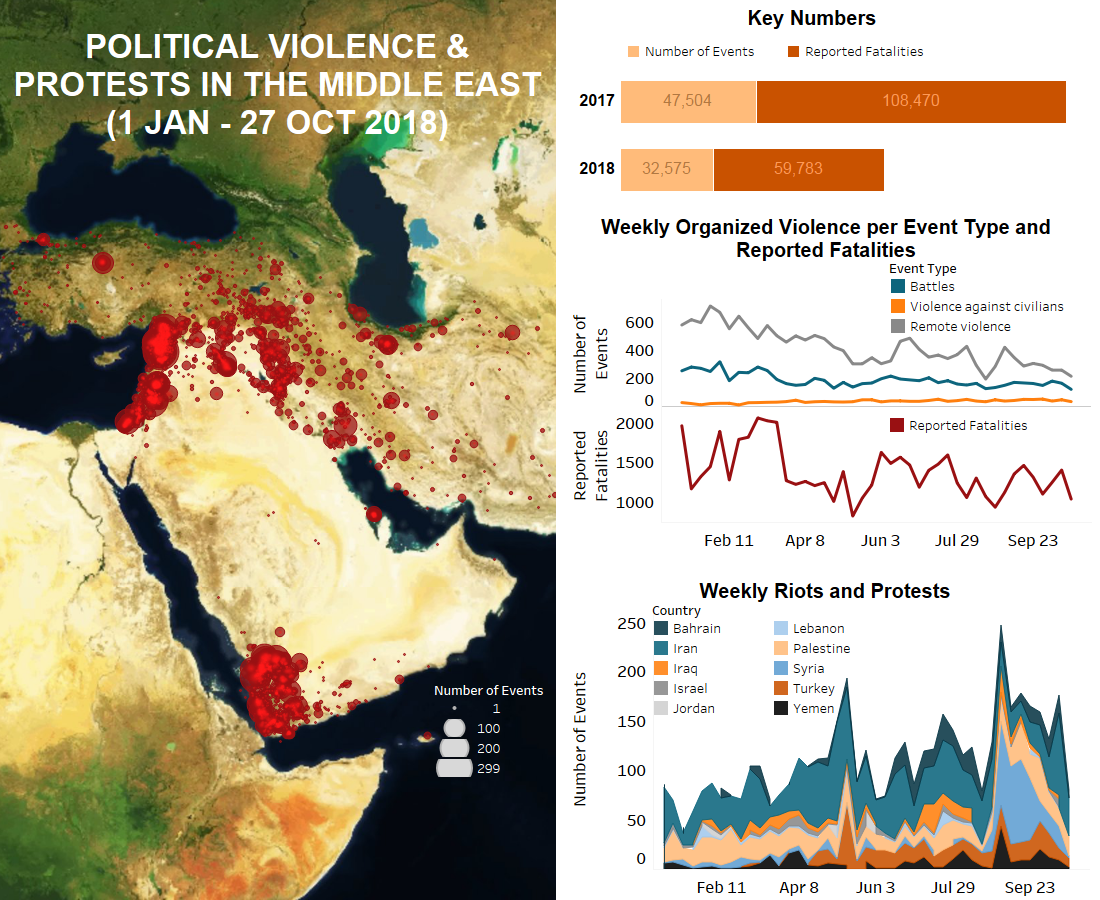