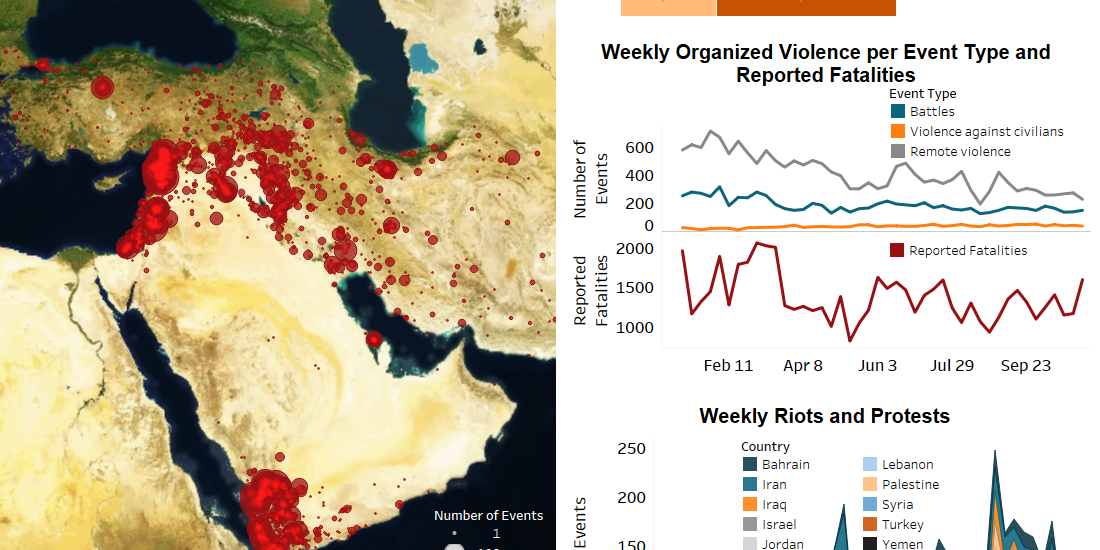 In the Middle East region last week, there was a general rise in reported fatalities, possibly related to the renewal or continuation of offensives in Syria and Yemen. At the same time, general demonstrations have continued to drop, with the exception of Bahrain where the life sentencing of opposition leaders, among other things, have fueled popular agitations. In Iran, reimposed US sanctions threaten to increase the number of ongoing labour demonstrations in upcoming weeks. Lastly, in Gaza, peace talks appear to be working, while in Iraq and Turkey the ongoing conflicts between state forces and armed groups continue.
In Israel/Palestine last week, there were no reports of remote violence along the Gaza border – a significant departure from the heavy shelling and airstrikes of late October. However, possibly more significant is the lack of incendiary device launch reports into Israeli territory last week. As part of peace talks, Hamas had earlier pledged to limit groups launching the devices, and it now appears that they were both capable and willing to do so. Meanwhile Friday demonstrations as part of the Great March of Return continue in Gaza, but have reduced in both attendance and violence.
In Jordan, an Islamic scholar and secretary-general of “Believers Without Borders”, Younis Qandil, was kidnapped and severely tortured last week after being accused of blasphemy for planning a conference called “People’s History of God’s Birth” (Al Bawaba, 11 November 2018). It is not clear who kidnapped him.
Meanwhile in Iraq, despite a general reduction in the number of violent events, there was a resurgence of Islamic State (IS) activity in Ninewa governorate. At least two car bomb attacks occurred in Mosul last week, both of which targeted civilians in restaurants. A Sala al-Din intelligence official claimed that IS have regrouped in some areas of the north and south and are readying for a war of attrition (Xinhua, 9 November 2018).
Elsewhere in the country, a new wave of protests have begun in Basra and Babylon governorates regarding the appointment of certain officials and the state’s failure to meet demands made during previous protests. It is unclear whether these will escalate into wide scale demonstrations similar to those seen earlier in the year (for more on that, see this past ACLED piece).
In Iran, labour demonstrations continue across the country over delayed or low wages, and by farmers demanding relief during water shortages. A few Iranian cities were the site of mass shopkeeper strikes in protest of the worsening economic situation. On November 5, the US administration re-imposed economic sanctions on Iran, adding to the tension (Sky News, 5 November 2018).
Meanwhile in Bahrain, there was a spike in both riots and protests last week. Most were related to the recent life sentencing of Sheikh Ali Salman, secretary-general of the opposition al-Wefaq group, and his fellow group members, Sheikh Hassan Sultan and Ali Alaswad. They were charged for allegedly transferring confidential information to, and receiving financial support from, Qatar (Reuters, 3 November 2018). Several demonstrations also occurred to denounce the forging of closer ties with Israel after reports emerged that Israel’s Minister of Economy and Industry Eli Cohen had been invited to attend a conference in Bahrain to discuss cooperation between the two countries (MEMO, 9 November 2018).
In Turkey, two explosive-laden drones crashed into a parade ground near the Governor’s office and land owned by the Gendarmerie in Sirnak city. No casualties were reported and no group claimed responsibility, although there is speculation that the Kurdistan Workers Party (PKK) is involved, given their strong presence in Sirnak province.
Meanwhile, the explosion of a munitions depot on a military base in Semdinli, Hakkari province, reportedly killed seven soldiers. An investigation has been launched, although it is being treated as an accident. Turkish military and PKK militants regularly clash in Hakkari province as part of the ongoing Kurdish rebellion in the southeast.
In Yemen, anti-Houthi forces, backed by the Saudi-led coalition, continued their offensive against pro-Houthi fighters in Al Hudaydah city, taking control of several areas, including the University, the Yemen dairy factory, and the “7 July” neighbourhood. Meanwhile, pro-Houthi forces fired several ballistic missiles targeting anti-Houthi forces in both Saudi Arabia and along the western coastal areas of Al Hudaydah governorate. Intense clashes were likewise fought in Ad-Dali governorate, as the Yemeni army, supported by Popular Resistance fighters, advanced towards the strategic city of Damt.
Meanwhile, clashes between Al-Qaeda in the Arabian Peninsula (AQAP) and IS militants continued in Al-Bayda governorate, as did Coalition airstrikes into Sa’dah governorate.
In Syria, Syrian Democratic Forces (QSD), supported by extensive Coalition airstrikes, resumed their offensive against IS in the Hajin area of Deir-ez-Zor governorate, however no significant advances were reported. QSD and Coalition reinforcements continue to arrive into the area, signalling a possible final push. The resumption of the Hajin ground operation comes following talks with Turkish officials, who the week prior had shelled QSD forces and members of the Kurdish People’s Protection Units (YPG) in Deir-ez-Zor (Reuters, 11 November 2018). However, last week, Turkey continued to shell QSD-controlled areas along the Turkish-Syrian border in both Aleppo and Ar-Raqqa governorates.
Finally, in the As-Sweida countryside, clashes between IS and the Syrian army, supported by Iranian and Hezbollah fighters, continued in the Tlul al Safa area. 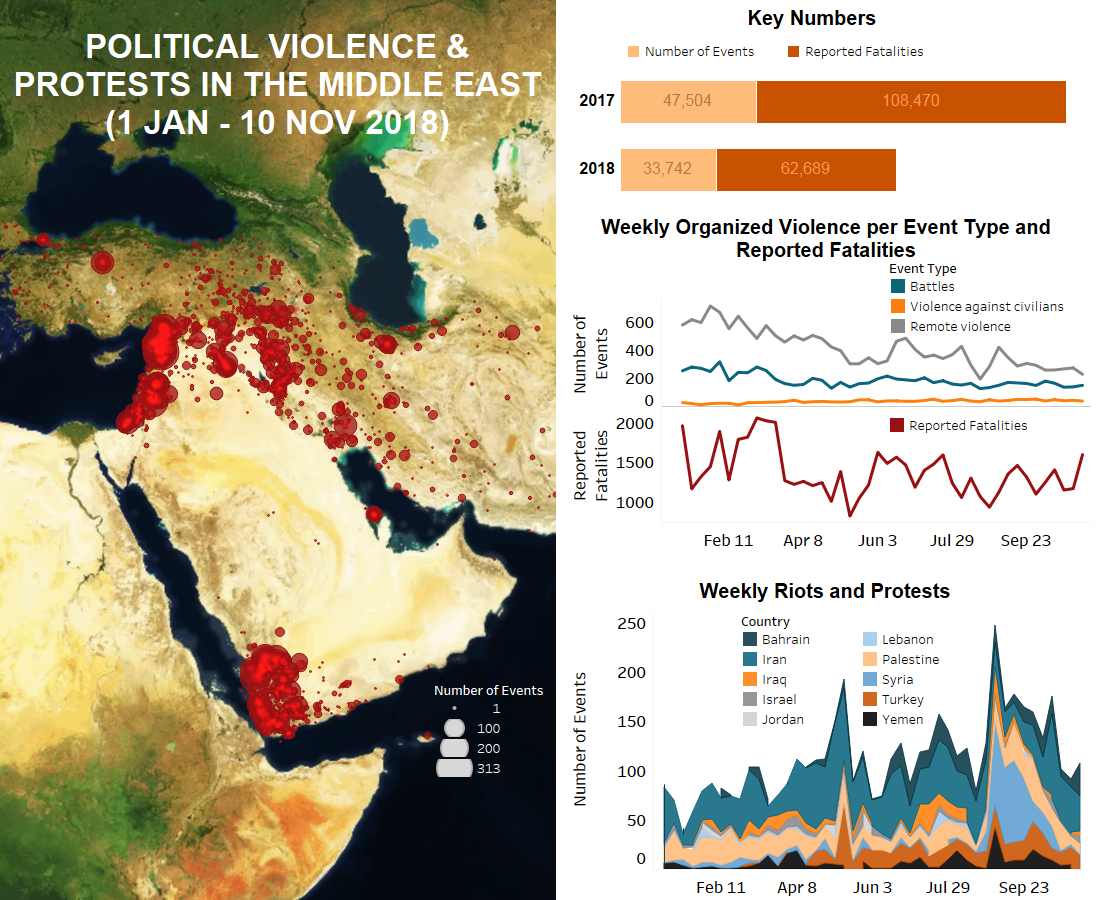 Tom Hart is the Global Research Coordinator with ACLED, and a part-time brewer and genealogist. He received his BA in International History from Carleton University in Ottawa, where he focused on colonial relationships, intercultural interaction, and geocultural perspectives. Tom is currently based out of Ottawa, Canada, and is fluent in English and French.
13 November 2018
Share
TweetShare on Twitter Share on FacebookShare on Facebook Share on LinkedInShare on LinkedIn