Throughout the Middle East region last week, the number of battles has continued to decrease as part of a trend since the beginning of the new year. At the same time, instances of remote violence have increased slightly. In Yemen and Saudi Arabia, there was a sharp increase in reported fatalities not seen elsewhere in the region. Moreover, the number of riots and protests have remained relatively consistent with recent weeks, although there was a noticeable increase in Lebanon, reminiscent of the late December 2018 agitation (Washington Post, 23 December 2018).
In Palestine, last week started off with a number of retaliatory airstrikes and artillery fire by Israeli forces targeting northern Gaza and the areas in and around Gaza city; these followed a rocket launched from the territory on 12 January. Several of the Gaza targets were reported to be Hamas infrastructure. Meanwhile, clashes between rioters and Israeli security forces continued along the border last Friday as part of the weekly Great March of Return demonstrations; 43 people were reportedly injured (Ma’an News, 19 January 2019).
In the West Bank, a number of clashes erupted between locals and security forces during Israeli raids throughout the week. There was also at least one large demonstration which accompanied Tuesday’s West Bank-wide strike against the proposed Social Security Law (Haaretz, 16 January 2019). Elsewhere, demolitions and Palestinian-settler violence continued.
In Israel, it was a quiet week domestically with only one demonstration being reported by Haredim against the autopsy of a murdered couple in Jerusalem.
In Lebanon, there was an incident on 13 January where Amal supporters tore down the Libyan flag, burned it, and replaced it with an Amal flag, prompting Libya to withdraw from the Arab Economic and Social Development summit (Daily Star, 15 January 2019). On the same day, thousands of demonstrators took to the streets across the country in protests called for by the Lebanese Communist Party. The demonstrations drew attention to dissatisfaction with economic conditions, corruption, and the continued delay in forming new government. There was a similar protest held by students on 17 January in Beirut.
Meanwhile in Iran, demonstrations by workers, teachers, farmers, and other groups continued across the country. Furthermore, it was reported that two civilians and two soldiers were seriously injured, and two additional border guards were killed in three separate landmine incidents along Iran’s western border. Iran is one of the most landmine-infested nations in the world; five of Iran’s provinces bordering Iraq – covering 4.2 million hectares – are still contaminated with millions of landmines: leftovers from the Iran-Iraq War, waged between 1980-1988 (Lobe Log, 5 February 2016).
In Bahrain, dozens of riots and protests were aimed at commemorating the second anniversary of the execution of three Shiite men who were convicted of planting a bomb which killed three policemen in 2014. Their execution in 2017 provoked a national outrage, since it was believed that the men’s convictions were based on retracted confessions and mired in allegations of serious torture (NY Times, 15 January 2017).
In Turkey, clashes between the Kurdish Workers Party (PKK) and Turkish security forces continued in the country’s southeastern provinces of Hakkari, Diyarbakir, and Igdir. As reported by a PKK source, the militant group allegedly killed 12 Turkish soldiers during an assault on Axur military post in Igdir.
Elsewhere, there were two demonstrations in Batman and Diyarbakir provinces against the continued isolation of PKK leader Abdullah Ocalan, and the treatment of other PKK militants in prison. Many prisoners and MPs have gone on hunger strike as a result (ANF News, 13 January 2019).
In Iraq, demonstrations have once again turned violent in the southern governorate of Basrah. Rioters set fire to police headquarters – and clashed with security forces – after they came out to demonstrate against a lack of services and corruption. Meanwhile, peaceful protests also occurred in neighbouring Muthanna governorate by oil refinery labourers who were let go and replaced by Iranian workers.
Further north, security forces resumed their targeted raids on IS hideouts and weapons caches, resulting in several fatal clashes. IS, on the other hand, continued their strategy of ambushes and IED attacks; last week, the group was particularly active in Kirkuk governorate. On 16 January, a leader of the Kurdistan Democratic Party (KDP) was shot dead by unidentified militants in the governorate capital.
In Yemen, clashes continued between pro-Houthi forces and anti-Houthi soldiers backed by the Saudi-led coalition. Small territorial gains were reported by anti-Houthi forces in the districts of Baqim and Kitaf wa Al-Boqee, Sadah governorate, Harad district of Hajjah governorate, and in Damt district of Ad Dali governorate.
In Hodeidah port city, a number of armed clashes were reported alongside consistent shelling every day last week. Battles were fought outside of the city in the districts of Tuhayat, Jah, and Hays. In one incident, armed group(s) fired on the UN peacekeeping team which was deployed within Hodeidah.
Meanwhile, a number of protests were held in Aden city, with demonstrators demanding that detained persons be released from local prisons. Discontent in the southern areas of the country has been rising as UAE-backed anti-terror units detain individuals accused of collaborating with Al-Qaeda in the Arabian Peninsula (AQAP) and IS militants (NTH News, 20 January 2019).
In Syria, Syrian Democratic Forces (QSD), with support from Coalition airstrikes, made further gains last week in IS’ Deir-ez-Zor countryside enclave, taking full control of Sosa town. IS now controls only a small stretch of territory in the area. Elsewhere, a female IS suicide bomber detonated herself near a joint US and QSD patrol in Menbij city, Aleppo governorate, reportedly killing ten civilians as well as four US soldiers, and five members of their escort. It is not yet clear whether QSD advancement in the Hajin enclave has had a direct effect on IS tactics elsewhere in the country.
Lastly, regime forces continued their shelling campaign against populated areas and opposition targets, such as HTS and Jaysh al Izza, in northern Hama, and the south of Idleb and Aleppo governorates. In a few cases, opposition forces returned artillery fire or clashed with small arms. 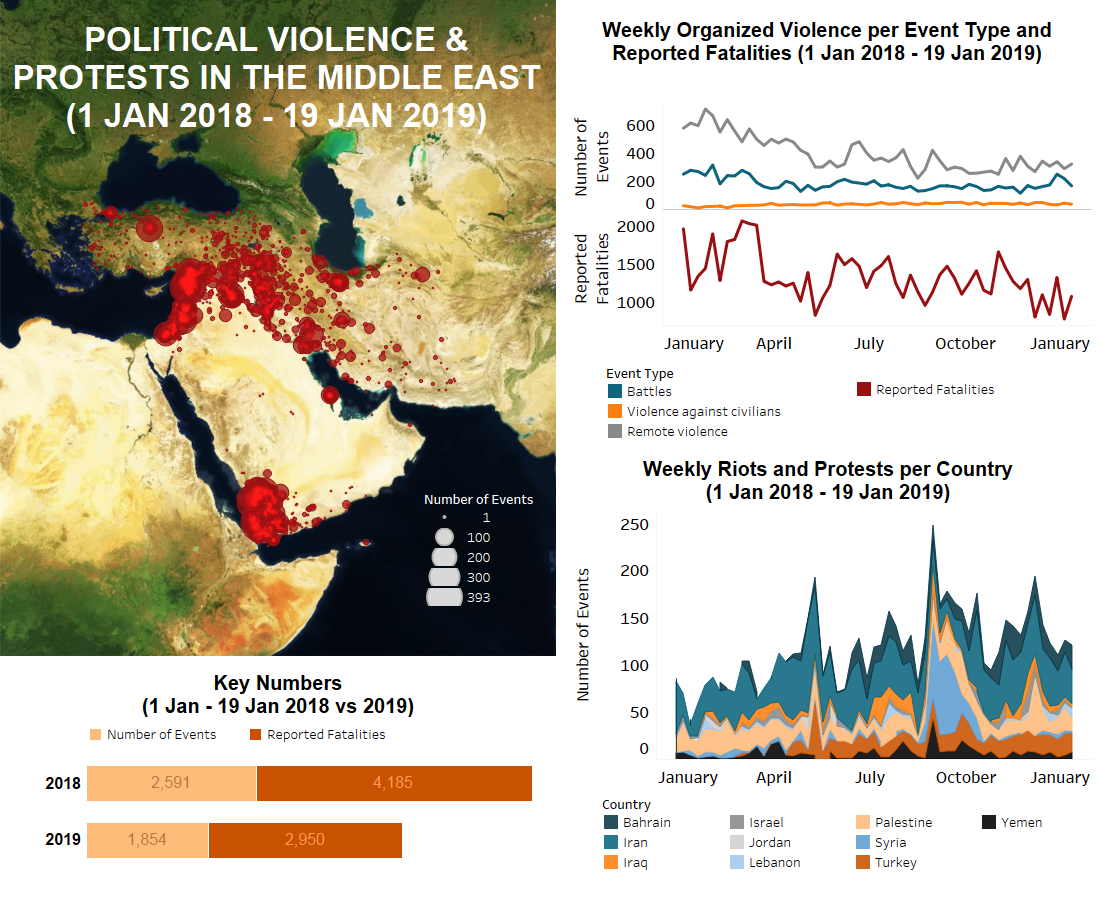