Key developments in Africa in the week of March 17th include jihadist and intercommunal attacks in Mali; the rise in the Boko Haram activity along the Nigerien, Chadian and Cameroonian shores of Lake Chad; and the threats to the peace process in CAR and to civilians in counter-insurgency operations in Egypt.
There were two key attacks in Mali last week that brought the total reported fatality numbers in the country to their highest since the peaks of June and July 2018. The two events confirm that jihadist and intercommunal violence remain potent sources of instability in Mali in 2019. First, on March 17th, Katiba Macina militants, whom are affiliated to the Group for Support of Islam and Muslims (JNIM), attacked a camp of the Malian army in Dioura in Tenenkou cercle (Mopti region), leading to a battle that reportedly left 26 soldiers and three militants killed as well as numerous soldiers wounded and property burned down. This is the most violent attack against state forces since the suicide bombing perpetrated by Al Mourabitoun and AQIM militants against a military camp in Gao on January 18th, 2017, which had left 54 forces killed. The second key event in Mali last week was the unprecedented attack by presumed Dan Na Ambassagou militiamen on the Fulani villages of Ogassogou and Welingara, close to Bankass (Mopti region). The attack left at least 135 people killed (the toll is expected to rise) and property pillaged and burned down. The number of attacks against Fulani communities by Dogon militias as well as by Malian military forces had multiplied in February compared to previous months. In March, the trend reversed with violence perpetrated by Fulani militias against Dogon villages on three occasions in Bandiagara and Koro (Mopti), leaving one person killed, livestock stolen and houses and granaries burned down.
Meanwhile, Boko Haram militants are increasingly concentrating their activity along the Nigerien, Chadian and Cameroonian shores of Lake Chad. In Niger, IS-aligned Boko Haram militants (ISWAP) attacked civilians in seven villages of the Diffa region over March 19th-23rd, leaving a reported 23 people killed and two women abducted. This brought the total number of ISWAP-related events and fatalities to 17 and 92 respectively so far March, that is double the number of events and triple the number of fatalities compared to February. In Chad, ISWAP carried out last week its most violent attack against Chadian forces recorded to date, killing a reported 23 soldiers in Dandallah in the Mamdi department on March 22nd (Lac region). And in Cameroon, Shekau-aligned Boko Haram militants have been more active in March than over the previous six months. Last week, they killed another civilian while stealing livestock in the Fotokol area.
Other developments include the threats to the peace process in the Central African Republic (CAR) and the new offensives in Egypt.
In CAR, the uncovering of a new, more inclusive government by President Touadera as part of the most recent peace process came amidst increased tensions. In the Nana-Mambere prefecture, members of the Democratic Front for the People of the Central African Republic (FDPC) reinforced their pressure on the government by reinstalling their barricade along the Bouar-Beloko road near Zoukombo; meanwhile, forces of the Return, Reclamation and Rehabilitation (3R) killed the mayor of Kounde and his son in Baboua sub-prefecture and blamed Anti-Balakas for retaliating against a clash between pastoralists and farmers in Bouar sub-prefecture. Elsewhere in CAR, in Bria (Haute-Kotto) unknown gunmen killed two officers of the Union for Peace in the Central African Republic (UPC), another key group in the peace process.
In Egypt, conflict levels have significantly diminished since the peak of December 2018, when the military launched key air and ground offensives in conjunction with the Israeli air forces against Islamic State (IS) insurgents in North Sinai. The operations were launched as a result of the multiplication of attacks by the insurgents in the region. Whilst the downward trend shows that the government has managed to better control the insurgency, IS remains a threat. Last week, they fired missiles and rockets at military positions on several occasions, detonated IEDs against military patrols and continued to engage in fighting in the Rafah, El Arish and Al-Hasna areas, prompting renewed airstrikes by the Egyptian and Israeli forces around March 22nd. What’s more, the government’s response to the insurgency seems to have involved an increasing targeting of civilians, through the shelling of civilian areas, violent raids and systematic bulldozing of civilian houses. The levels of violence against civilians by state forces are higher so far in 2019 than in the whole of 2018 and 2017. 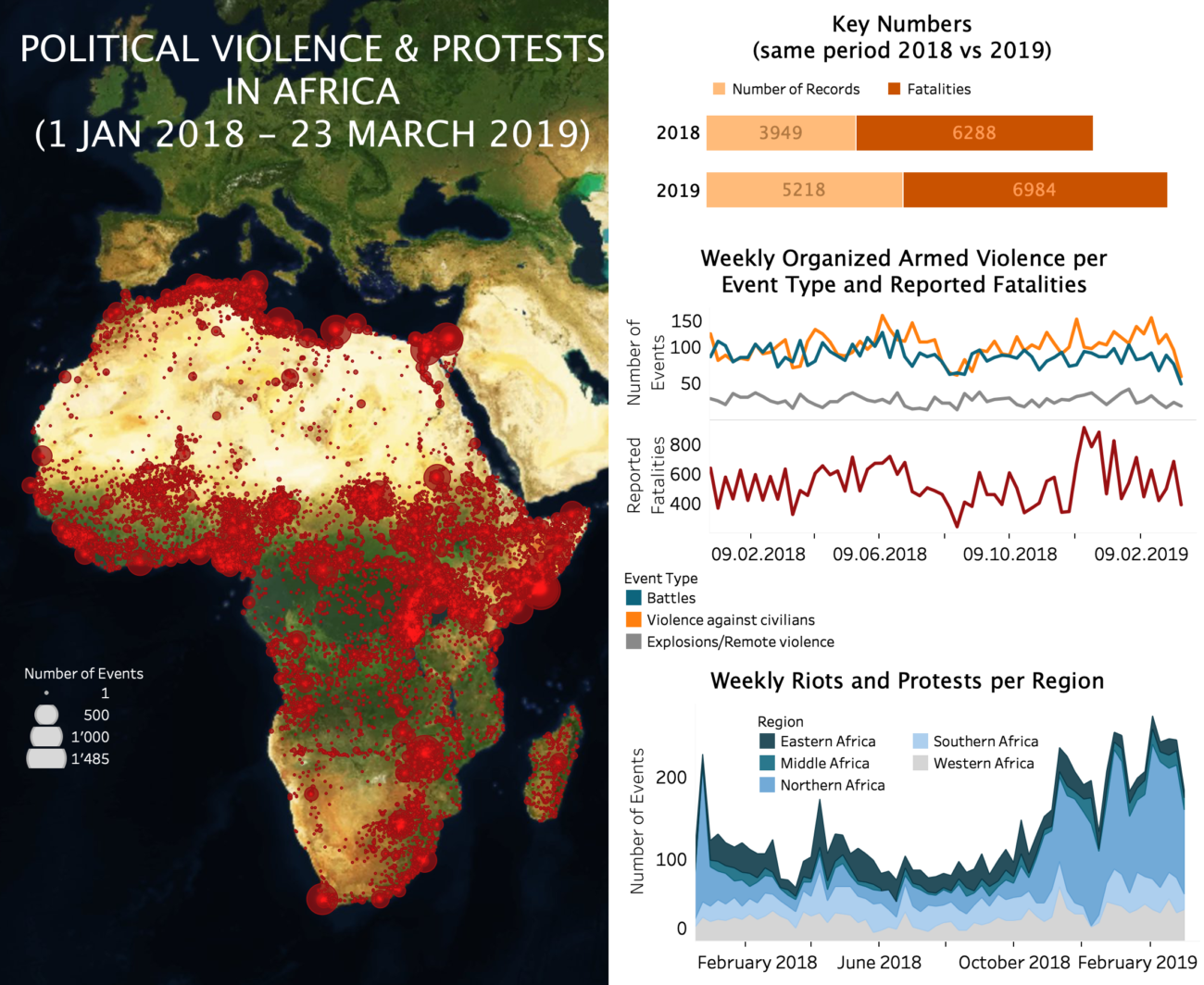 The Armed Conflict Location & Event Data Project (ACLED) is a disaggregated conflict analysis and crisis mapping project. ACLED is the highest quality, most widely used, realtime data and analysis source on political violence and protest in the developing world. Practitioners, researchers and governments depend on ACLED for the latest reliable information on current conflict and disorder patterns.
26 March 2019
Share
TweetShare on Twitter Share on FacebookShare on Facebook Share on LinkedInShare on LinkedIn