Political Violence Skyrockets in the Sahel According to Latest ACLED Data 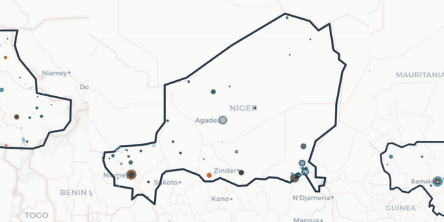 28 March 2019: As the UN Security Council returns from a visit to Mali and Burkina Faso, the Armed Conflict Location & Event Data Project (ACLED) has recorded a massive spike in deadly violence across the Sahel.1 Over the last five months, there has been an increase in both fatalities and conflict events in the region, with approximately 5,000 reported fatalities and more than 1,200 violent events recorded by ACLED. This represents an increase of 46% and 31% respectively relative to the same period the previous year. Over 2,100 of these reported fatalities have resulted from attacks targeting civilians.

Conflict in Mali, Niger, and Burkina Faso is a major driver of the escalation — and civilians have faced the brunt of the violence. Compared to the same period last year, reported fatalities linked to direct attacks targeting civilians from November 2018 to March 2019 have risen by a startling 7,028% in Burkina Faso, followed by 500% in Niger and over 300% in Mali.

With an unprecedented massacre leaving more than a hundred Fulani villagers dead in Mali over the weekend, the rising tide of Islamist and intercommunal violence riving the Sahel shows few signs of stopping.

For additional figures and analysis for Burkina Faso, Niger, Mali, and other countries in the Sahel region, as well as interview requests and  press inquiries, please contact:
Sam Jones, Communications Manager
[email protected]
___________

1Countries comprising the Sahel: Senegal, Mauritania, Mali, Burkina Faso, Niger, Nigeria, Chad, and Sudan.
2Fatality numbers are frequently the most biased and poorly reported component of conflict data. While ACLED codes the most conservative reports of fatality counts to minimize over-counting, this does not account for biases that exist around fatality counts at-large. Find more information about ACLED’s methodology for coding fatalities here.
3This figure includes only civilians killed as a result of direct civilian targeting. It does not include collateral civilian fatalities. As such, the number is assumed to represent an underestimate of the total conflict-related civilian fatalities.