From the Streets to the Elites: Demonstrations in a Post-Bouteflika Algeria

The wave of protests in Algeria which emerged in mid–February 2018 in response to Bouteflika’s plan to run for a fifth term, has undermined the Algerian elites’ confidence in the 82-year-old President. On April 2nd, Bouteflika resigned from office after two decades in power (BBC, 2 April 2019). In the days leading up to his resignation, statements from high-ranking politicians and military officials calling for Bouteflika’s replacement highlighted the extent to which ‘Le Pouvoir’ — a nickname for the elite members of the military, business community, and politics that govern Algeria — had lost faith in Bouteflika.
The persistence of anti-government demonstrations, even after the March 11 announcement that he will not run for a fifth term, however, suggest that merely Bouteflika’s departure will not satisfy the public. Though the wave of anti-government demonstrations in Algeria thus far has largely been peaceful and undispersed by the government, it is unclear how ‘Le Pouvoir’ will respond to continued demonstrations after Bouteflika’s departure from office. Though the elites have been willing to concede Bouteflika’s position and have not resorted to violent repression, this may change if they feel their position is threatened. 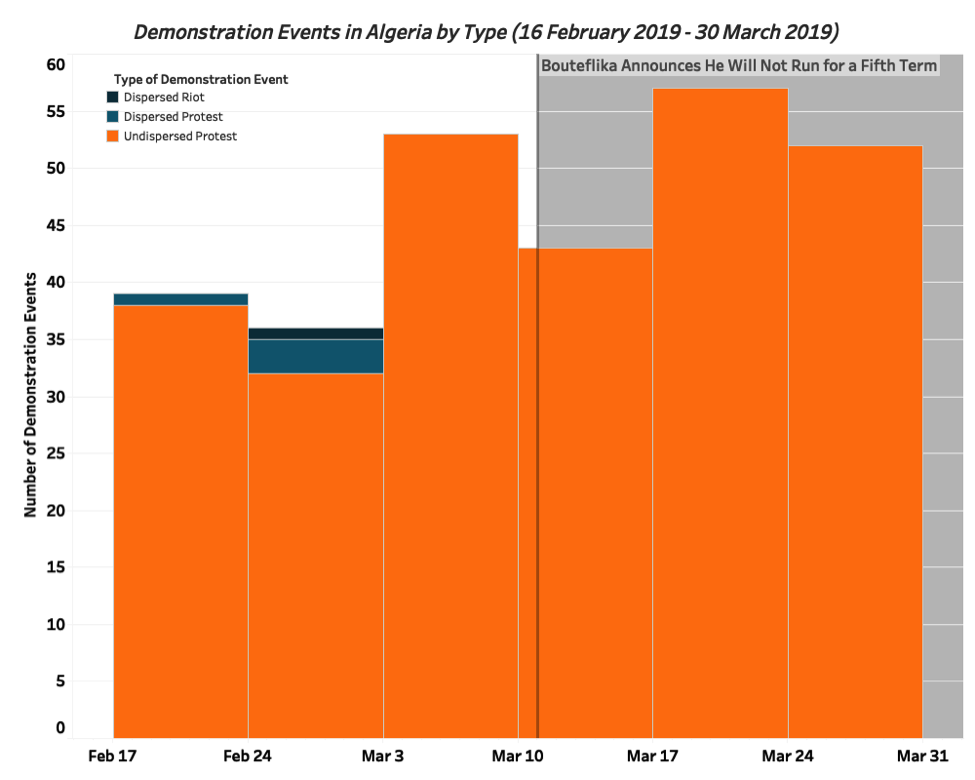 The lack of government repression may have contributed to the spread of protests throughout the country. Though urban centers like Algiers, Constantine, and Tizi Ouzou are common sites of repeated demonstrations, since February 16, there have been demonstrations in more than 50 locations. In March 2019, demonstrations spread to 17 new locations throughout Algeria. 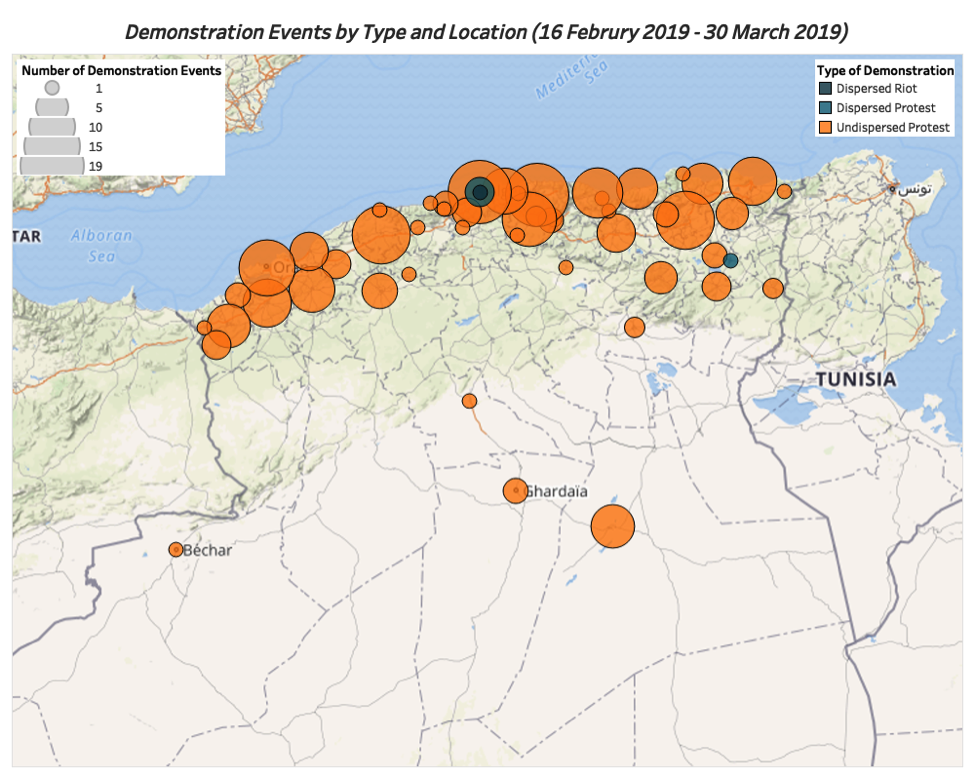 … and a Shadowy Response

Though the Algerian government has not frequently publicly cracked down on these demonstrators, it has tried to quell these displays in a number of less direct ways. Netblocks, a civil society group focused on internet freedom, reported internet disruptions in the country in early March, which they suggest was done to prevent anti-government protests (Netblocks, 1 March 2019). In early March, Bouteflika announced plans to serve a shortened third term. By mid-March, amid spreading demonstrations, President Bouteflika made an announcement delaying the elections, reshuffling high-ranking government officials, and asserting that he will not run for a fifth term.
On March 26, the Army Chief of Staff — and previously close ally of Bouteflika — Gen. Ahmed Gaid Salah, called for Bouteflika to vacate the office in accordance with constitutional provisions (The National Interest, 26 March 2019). In response to Gen. Salah’s statement, the country’s constitutional council held a meeting that day (Reuters, 26 March 2019). Salah was quickly joined by Ahmed Ouyahia, the recently removed Prime Minister and current head of the National Rally for Democracy (RND), a party previously allied with Bouteflika (The Guardian, 26 March 2019). These announcements all reflect a political class in flux, seeking to preserve their influence. A retired army general told Reuters “The game is between the presidency and the demonstrators. And the referee is the army. So you can exclude a player, but you cannot exclude the referee” (Reuters, 29 March 2019).