Islamist groups have been deemed one of the most significant threats to international security in the 21st century, and current conflicts include peak levels of political violence involving Islamist actors (New York Times, 6 July 2018). Islamism can imply a variety of qualities – most commonly, the term implies that the group in question aims to establish a state governed according to Islamic law or principles, or to gain independence for Muslims living under non-Islamic states (Wilson Center, n.d.). However, Islamist groups, though painted with a broad brush, constitute a diverse and complex collection of actors operating worldwide.
Figure 1. Selected Islamist groups included in analysis (in no particular order)* 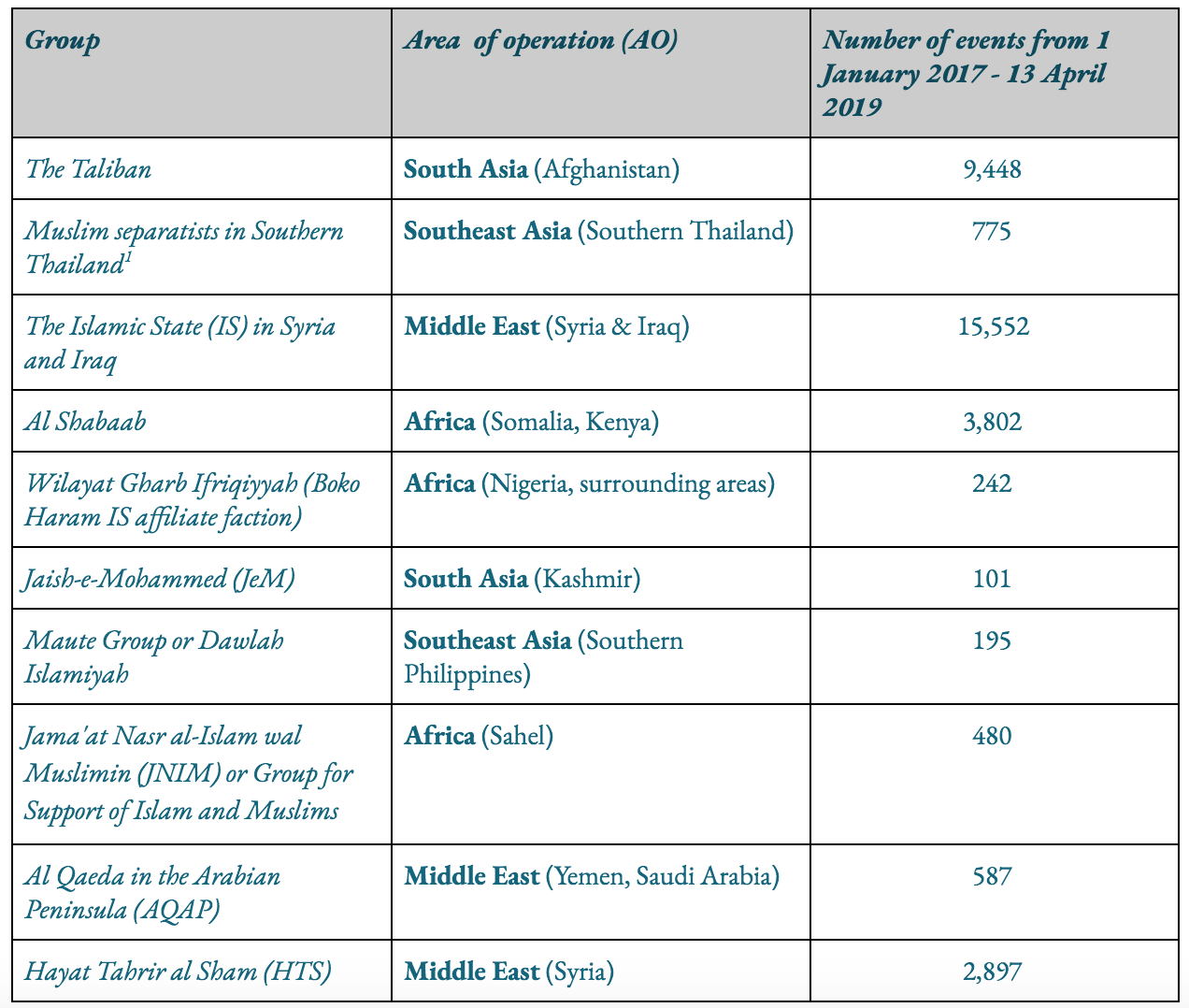 *This list does not indicate the most active Islamist groups in ACLED’s dataset; rather, it is a cross-section of Islamist groups with differing characteristics, contexts, and levels of activity.
The following analytical primer analyzes the activity of ten Islamist groups (Figure 1) operating across the world and across a variety of dimensions (Figure 2), in order to examine how a group’s characteristics affect its engagement activity. The events within which and actors with whom Islamist groups engage vary according to the context in which a group operates, the strength of its affiliation with global networks, the scope of the group’s focus, its immediate objectives, and international intervention levels.
Figure 2. Characteristics explored in analysis below

Islamist groups operate across a wide variety of conflict contexts. Broadly, Islamist groups interact with these environments in one of three ways: a group may lead a high-grade insurgency — implying that absent a full-scale civil war, this group is the primary source of a sophisticated insurgency. A group may conduct an isolated or low-grade insurgency, where the group — while potentially a source of significant disorder — cannot or chooses not to conduct a full-blown insurgency, operating instead in a limited capacity. Finally, a group may participate in an ongoing conventional conflict, meaning the group — while a major source of disorder — is one of many conflict actors perpetrating political violence during an ongoing conflict, such as a civil war.
Figure 3. Islamist groups sorted according to conflict context

Figure 4 shows the proportion of activity in which each category of Islamist group was involved  since 2017 – this includes all engagements: both events perpetrated by and against Islamist groups. While groups across all three conflict contexts engage in more armed clashes (teal) than any other event type, groups engaged in ongoing conventional conflicts are proportionally more likely to engage in territorial shifts (navy) than groups conducting either high- or low-level insurgencies, likely reflecting the state’s more fragile hold on territorial control during conventional conflicts. Similarly, air/drone strike events (orange) make up a higher proportion of the activity of groups involved in ongoing conventional conflict settings, as well as of groups conducting high-level insurgencies. This is likely partly due to higher foreign engagement in such conflicts. Attacks on civilians (black), as well as remote explosives/landmines/IEDs (red), are proportionally more commonly used by groups engaged in low-grade insurgencies, which may not have the will or capacity to conduct more sophisticated warfare.
Figure 4. Activity engaged in by Islamist groups according to conflict context

Additionally, groups leading high-level insurgencies are engaged proportionally more often with the state (navy) than with other actors – partially, no doubt, because there are fewer additional groups active in such contexts (see Figure 5). On the other hand, Islamist groups within conventional conflicts target other armed non-state actors (red and yellow) proportionally more than Islamist groups across the other two categories. In these contexts, multiple non-state violent groups are more likely to be present.
Figure 5. Actors engaged with Islamist groups according to conflict context

Independent groups – dominated by Muslim separatists in Southern Thailand in this sample – engage more in remote explosive/landmine/IED (red) activity compared to tactics, potentially indicating Independent groups’ reliance on disruptive, asymmetric activity (see Figure 7). The makeup of Al Qaeda affiliate engagement looks similar to that of official Al Qaeda branches, with the exception that a higher proportion of Al Qaeda branch activity involves remote violence (red, orange, and yellow). Islamic state branches by far engage in the highest proportion of territorial shifts (navy), nearly double that of Al Qaeda affiliates. This is unsurprising given IS’s short-term focus on seizing and governing a caliphate.
Figure 7. Activity engaged in by Islamist groups according to network affiliation

Nearly 70% of Al Qaeda affiliate activity involves state forces (navy). Meanwhile, engagement with non-state groups (rebels as well as militias, red and yellow respectively) is proportionally highest amongst Islamic State branches, which are less likely than Al Qaeda affiliates to work alongside non-aligned Islamist groups (see Figure 8). A preponderance of property destruction and explosions/remote violence tactics perpetrated by Muslim separatists in Southern Thailand account for the high level of Independent engagement with no other actor (black). Al Qaeda branches have the highest proportion of engagement with external forces (teal) relative to other actors, in part because of these groups’ focus on targeting foreign forces, and foreign force airstrikes targeting them in return.
Figure 8. Actors engaged with Islamist groups according to network affiliation

There is no straightforward way to categorize Islamist groups as ‘local’ or ‘global.’ All groups operate in a local context, and nearly all operate with some degree of connection to global jihadist networks. The primary difference between Islamist groups’ level of operation is the officiality of the group’s tie to international jihadist networks, as well as the ‘global orientation’ of the group’s objectives. Local affiliates of global groups are just that – groups with officially recognized ties to global jihadist organizations (IS or Al Qaeda), whose primary objective, within the local context in which they operate, is to further the goals of these broader organizations. Primarily locally-oriented groups are those which, despite potentially strong ties with global organizations, have chiefly local operations, and do not primarily act on ‘behalf’ of a global group.
Figure 9. Islamist groups sorted according to  level of operation

The types of activity  engaged in by local and globally oriented groups are largely similar (see Figure 10). Proportionally, more activity involving global groups can be classified as ‘air/drone strikes’ (orange), in large part perpetrated against the group. This potentially signals increased foreign actor attention directed at global groups.
Figure 10.  Activity engaged in by Islamist groups according to level of operation

Official branches of global groups more often engage non-state armed groups (red and yellow) relative to other actors (see Figure 11). They also target civilians (blue) proportionally more often, have higher proportional involvement with external forces (teal), and less relative engagement with state actors (navy). This may be related to the context in which many of these groups operate, where more actors and weaker states are prevalent.
Figure 11. Actors engaged with Islamist groups according to level of operation

Islamist groups pursue a plethora of different short- and long-term objectives, and individual groups vary their aims over time. For example, many Islamist groups go through periods of attempting to gain territory and, suffering defeats, recede and temporarily cease pursuing this goal. Nevertheless, Islamist groups at any particular time can be separated according to those which seek governance as a primary short-term objective, and those that do not. Some in this latter category – Boko Haram, AQAP, and the Maute Group for instance – have gained and governed territory in the past, but their objective is not — at the moment — primarily the consolidation of territory and the governance of people within it.
Figure 12. Islamist groups sorted according to objectives

Figure 13 demonstrates that, unsurprisingly, those groups interested in establishing territorial governance engage in a higher proportion of territorial shifts (navy) relative to other event types. These groups also engage relatively more frequently in armed clashes that do not involve territorial shifts (teal), and it is possible some of these instances are failed attempts to seize territory. Air/drone strikes (orange)  also make up a higher percentage of these groups’ engagement activity, potentially implying a higher level of international engagement against groups intent on governance. On the other hand, groups engaged primarily in disruption engage in a higher proportion of explosions/remote violence (red, orange, and yellow) and violence against civilian events (grey and black) relative to other event types.
Figure 13.  Activity engaged in by Islamist groups according to objectives

Islamist groups with short-term governance goals have higher proportional engagement with states (navy) and with other non-state violent actors (rebels and militias, red and yellow respectively) relative to other groups, and less with civilians (blue) relative to other groups (see Figure 14). This is to be expected; pursuing territorial or governance objectives – that is, fighting to overtake a piece of territory – engages other armed actors relatively more frequently than civilians.
Figure 14. Actors engaged with Islamist groups according to objectives

The proportional engagement with external forces (teal) are surprisingly similar across the two groups. Engagement with state forces (navy) is proportionally higher amongst high-interest groups, as is engagement with rebel groups (red) and political militias (yellow). On the other hand, civilian targeting is proportionally more common amongst those groups operating in contexts where there are low levels of international involvement.
Figure 17. Actors engaged with Islamist groups according to level of intervention

It is difficult to specify how Islamist groups’ behavioral patterns vary according to contextual and organizational characteristics. Many of the categories explored above are overlapping and interdependent, both with each other and with group engagement patterns. However, demonstrated correlation between these divides and the types of events in which and actors with whom Islamist groups engage present interesting analytical potential. In particular, three patterns warrant close examination:
First, conventional conflict offers opportunities for Islamist groups to expand their territorial goals. Groups operating within ongoing conventional conflicts engage in more territorial tussling relative to other event types, as well as engaging proportionally more often with other violent non-state actors.
Second, converse to conventional opinion, civilian targeting is a strategy used proportionally most by groups not seeking territorial control. Groups primarily concerned with disruption, as opposed to governance ambitions, engage in higher levels of violence against civilians relative to other event types than groups concerned primarily with governance.
Third, where there is not a high level of international attention, civilian targeting is relatively more common than other tactics and engagement types. This is no doubt in part because there are fewer other groups with whom to engage. Regardless, groups operating in conflict contexts without the international spotlight engage in higher levels of civilian targeting relative to other types of activity.
1Muslim separatists in Southern Thailand are not a formal group, but a collection of armed groups and militias operating with the end of independence for the Malay-Muslim population in Southern Thailand.