The biggest developments in the South and Southeast Asian region last week included the deadly Easter Sunday bombings in Sri Lanka and heavy fighting between Taliban and Afghan security forces in Afghanistan. Key trends in the region include: organized violence involving domestic rebel groups in Pakistan and Myanmar; separatist violence in Thailand, Indonesia, and the Philippines; and election-related protests and violence in India, the Philippines, Bangladesh, and Indonesia.
Last week started with the deadly Easter Sunday bombings in Sri Lanka. In a series of eight explosions, suicide bombers attacked several locations including three churches in Colombo, Batticaloa, and Negombo — as well as three luxury hotels in Colombo. The attacks reportedly left 253 people dead, including around 40 foreigners, and hundreds of people injured. The Islamic State has claimed responsibility for the bombings while the Sri Lankan government blames the attacks on two local Muslim groups — National Thowheeth Jama’ath (NTJ) and Jammiyathul Millathu Ibrahim (JMI). In the aftermath of the Easter Sunday bombings, security forces engaged in a gun battle with the suspected perpetrators of the attacks in Kalmunai city in Eastern province on 26 April, which reportedly left six militants and ten civilians, including six children, dead.
Meanwhile, in Afghanistan, the spring offensives of both the Taliban and Afghan security forces continued at full force throughout the country. Both sides have been launching major assaults in Helmand and Ghazni provinces, with Afghan security forces and their NATO allies now taking the greater initiative in the latter. Fighting was particularly heavy in Ghazni’s Andar, Qarabagh, and central districts, where state ground assaults and NATO airstrikes have increased. Elsewhere, Taliban fighters appear to be focusing more heavily on gaining ground in Kandahar, Laghman, and Zabul. These heightened offensives come as peace talks continue between Taliban and American diplomats, although U.S. envoy Zalmay Khalilzad has made it clear that commitment to a permanent ceasefire needs to be part of the deal (Al Jazeera, 28 April 2019). Afghan President Ghani has convened a Loya Jirga – a traditional gathering of prominent citizens – for this week as a means to discuss next steps and the possibility of direct talks with the Taliban, who thus far have refused.
Elsewhere in South and Southeast Asia, organized violence involving domestic rebel groups was reported from several countries. Organized violence against security forces and civilians intensified last week in Pakistan. Multiple IED explosions were reported from Balochistan and Khyber Pakhtunkhwa provinces. In Myanmar, fighting between state forces and various ethnic armed organizations continued. There was an increase last week in fighting in northern Shan state between the Myanmar military and the Kachin Independence Organization/Kachin Independence Army (KIO/KIA), as well as the Palaung State Liberation Front/Ta’ang National Liberation Army (PSLF/TNLA) and Shan State Progress Party/Shan State Army-North (SSPP/SSA-N). Fighting was largely concentrated in Muse district. Meanwhile, in Rakhine state, three men accused of connection to the Arakan Army (AA) died while in military custody and were cremated before their families were notified. The families deny any connection to the AA and believe the men were mistreated while in custody.
Separatist violence continued last week in Pattani and Yala provinces of Thailand while the Indonesian military and the West Papua National Liberation Army (TPNPB) clashed in Papua in Indonesia. Deadly clashes between the Philippine military and Abu Sayyaf Group (ASG) as well as the Bangsamoro Islamic Freedom Fighters (BIFF) occurred last week in the Philippines.
Elections remain a major theme in South and Southeast Asia with Indian voters casting their votes in the third phase of the general elections and general elections drawing closer in the Philippines. In India, the third phase of the general election was held on 23 April. Demonstrations and incidents of electoral violence continued to be reported across the country, especially in Jammu & Kashmir (J&K), West Bengal and Kerala as well as several states where elections were held previously or will be held in the coming weeks, such as Punjab. Last week, 12 people were reportedly killed in armed clashes with militants and amid electoral violence in India. Voting in J&K’s Anantnag district prompted rioting activity amid a shutdown called by the Joint Resistance Leadership (JRL). Meanwhile, Maoist rebels triggered an IED blast at an election office of Bharatiya Janata Party (BJP) in Jharkhand’s Palamu district.
In the Philippines, with the general elections scheduled for 13 May, five government officials were reportedly killed last week. In Bangladesh, the recently concluded upazila (sub-district) elections continued to cause violence with a brother of an Awami League (AL) general secretary killed by a rival opposition candidate. In Indonesia, supporters of Prabowo Subianto, the presumed loser of the recent presidential election, protested the election results in Jakarta and East Java. Vote counting is ongoing in Indonesia with final election results expected on 22 May (South China Morning Post, 27 April 2019). 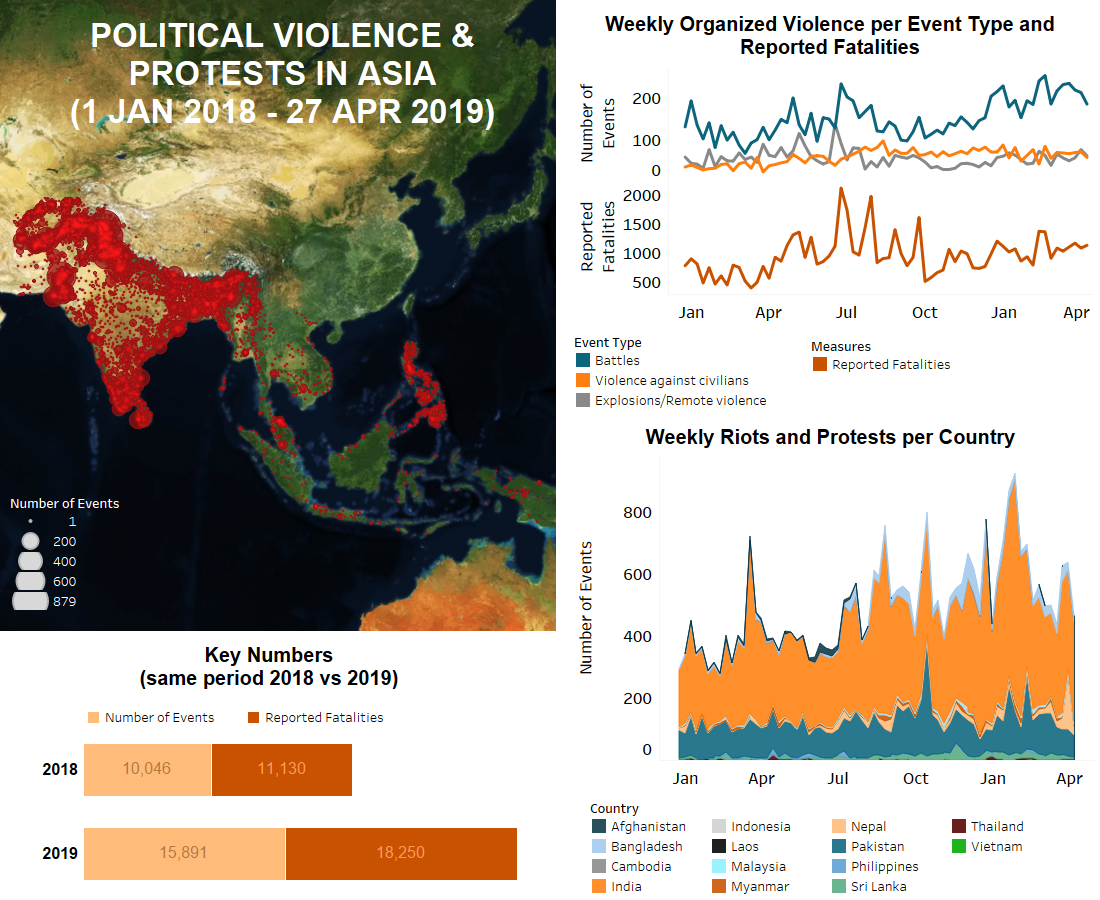