Developments in the Middle East region last week included a surge in conflict along the Gaza border, territorial gains by both sides in Yemen, as well as gains by Turkish and rebel forces in Syria. Meanwhile, May Day demonstrations erupted across the region by workers demanding a state response to economic hardship and poor working conditions.
Last Saturday marked the beginning of a major armed escalation between Gaza and Israel, with Hamas and Palestinian Islamic Jihad (PIJ) launching between 200 and 300 rockets across the border. Israel responded with a campaign of airstrikes which reportedly hit hundreds of sites in Gaza, including a building used by the Turkish news agency Anadolu Agency. The exchange was sparked by limited border violence in the days preceding, and continued to intensify into Sunday. The reported death of three Palestinian demonstrators during the Friday Return March demonstrations may have served as another catalyst. This recent flare-up in violence comes after a long period of relative, albeit tenuous, calm. These tensions were notably evident at the beginning of last week when Israel reduced the fishing zone around Gaza following the launch of a PIJ rocket (Al Jazeera, 30 April 2019). Tensions are also high among Palestinian groups themselves, most evidently between the Palestinian Authority (PA) and Hamas, but also between other armed groups. Infighting between Palestinian factions has been reported in Ein al Hilweh – a Palestinian refugee camp in Lebanon – for two weeks in a row now. On 26 April, a Fatah member was reportedly killed by a member of the Islamist group Fatah al Islam, sparking sporadic clashes into last week. The approach of Israeli Independence and Memorial days – in concurrence with Palestinian political divisions – make it unlikely that this current wave of violence will end any time soon.
In Syria meanwhile, regime shelling and Russian airstrikes increased steadily last week in and along the DMZ in the governorates of Hama, Idleb, Aleppo and Lattakia. Approximately 73 civilians were reportedly killed, and many more injured, as a result of this intensification. Local rebel factions including Hayat Tahrir al Sham (HTS), National Liberation Front (JTW), and the Wa Harred Al Mo’meneen Operation Room responded by targeting regime positions in the Hama countryside, reportedly killing several members of the Syrian army and loyal militias. Elsewhere in the Aleppo countryside, Syrian National Army ground troops backed by Turkish shelling managed to gain control of three villages after clashes with People’s Protection Units (YPG) fighters. The villages – which lie in the region between A’zaz and Afrin – were part of the remaining pocket under YPG control. Their capture was possibly part of an operation to secure military routes following previous attacks on Turkish convoys in the area.
In Yemen, fighting was reported along all the major fronts, with pro-Houthi forces continuing to make significant territorial gains. The most intense clashes took place in Qaatabah district of Ad Dali, which Houthi forces captured towards the end of the week. In the north, Saudi-backed anti-Houthi forces continued to push into the mountainous areas of Sadah governorate, with clashes occurring in the districts of Kitaf, Baqim, Razih, and Hashwah. Small territorial gains were reported by anti-Houthi forces in those areas.
Lastly, demonstrations erupted across the Middle East last week as part of International Labour Day (May Day). Labour demonstrations are relatively common throughout the region, particularly in Turkey and Iran, where economic crises have been ongoing for over a year. In the latter, both May Day and National Teachers’ Day occurred only one day apart, making teachers the most vocal labour group in the country. On the call of the Coordinating Council of Teachers Syndicates, demonstrations were held in front of Education Department offices in at least thirteen provinces to demand higher salaries and pensions, as well as the freedom to form an independent and united trade union. A general labour demonstration was held outside of Parliament in Tehran, where thousands of workers demanded better working and living conditions. In Turkey, massive demonstrations were held across the country, led by a number of major labour unions as well as opposition parties, like the Republican People’s Party (CHP) and Peoples’ Democratic Party (HDP). On 1 May itself, tens of thousands of people gathered to demonstrate in Bakirkoy Square, Istanbul, after Taksim Square – traditionally the site of May Day agitations – was declared off limits. Police intervention was limited to arrests, and no significant violence was reported, unlike previous years (Daily Sabah, 1 May 2019). In Bahrain as well, there was a sharp increase in labour demonstrations, most of which demanded the release of workers imprisoned for their political views. In Lebanon, the Communist Party led thousands of demonstrators in a march through Beirut to demand an end to government corruption and income inequality. Smaller protests were also held in Kuwait and Palestine. In Iraq, May Day demonstrations mostly affected Iraqi Kurdistan, with a number of unions leading protests to demand that the Kurdistan Regional Government better regulate working conditions. Oddly, no May Day protests were reported from Jordan, which over the past year has been the site of mass economic and anti-austerity demonstrations. This quiet may be a result of state attempts to address these issues, regardless of success (Jordan Times, 30 April 2019). 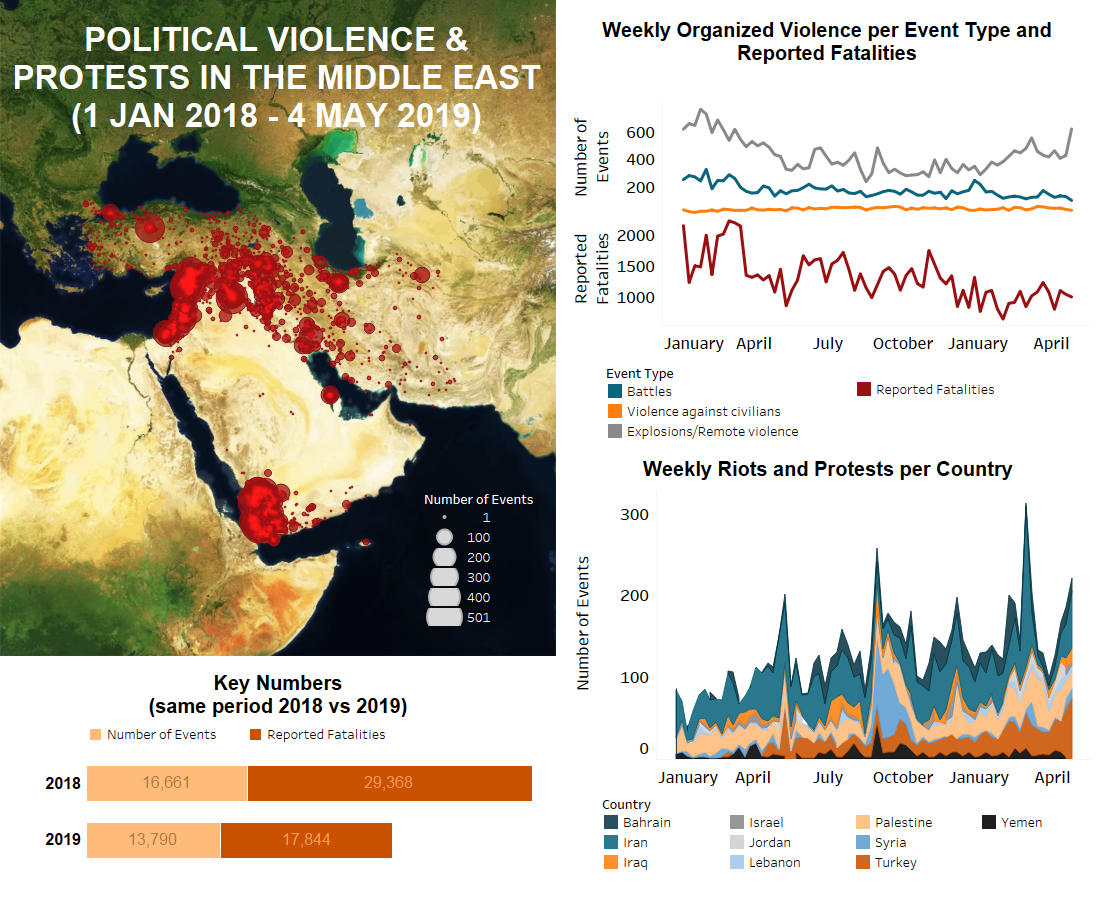