The key trends in the South and Southeast Asian region last week included heavy fighting between Taliban and Afghan security forces in Afghanistan; organized violence involving domestic rebel groups in Pakistan and Myanmar; separatist violence in Thailand; and election-related protests and violence in India, the Philippines, and Indonesia.
In Afghanistan last week, heavy fighting continued throughout the country as both the Taliban and Afghan security forces launched assaults as part of their spring offensives. The southeast of the country has been the main battleground over the past year, with the provinces of Helmand, Ghazni, and Kandahar being the most active last week as well (for more on recent conflict trends in Afghanistan, see this ACLED infographic). NATO activity has also risen despite ongoing peace talks between U.S. and Taliban representatives in Qatar. A number of NATO airstrikes targeted Taliban positions – mostly in Ghazni province – between 7-10 May. This increase was possibly in response to a 7 May Taliban attack on the offices of Counterpart International, a U.S. aid group in Kabul. It is unclear whether these attacks will improve or hinder the Taliban’s position in peace talks, which wrapped up their sixth round last week. The chief US envoy, Zalmay Khalilzad, once again made claims that the process is moving forward steadily, although he noted his frustration with the continued violence. It appears that both sides have generally agreed to the conditions of the agreement, although the sticking point is which side will act first. Taliban are demanding the withdrawal of American troops, while the U.S. seeks assurances of peace and a commitment from the Taliban that they will open a dialogue with the Kabul government (Al Jazeera, 9 May 2019).
Meanwhile, organized violence involving domestic rebel groups was reported from several other South and Southeast Asian countries. In India, security forces reportedly killed an Islamic State (IS) militant during a cordon and search operation (CASO) in Shopian district. Following the clash, IS proclaimed the establishment of a “province” in India which it called “Wilayah of Hind” (Reuters, 11 May 2019).
In Pakistan, separatist groups continued their campaign against Pakistani security forces in Balochistan province. In addition, the Baloch Liberation Army (BLA) attacked an upscale hotel in the port city of Gwadar, reportedly targeting Chinese nationals and other investors. Militant groups in Balochistan have long opposed Chinese investment claiming it does little to benefit locals and have targeted Chinese workers before (Firstpost, 14 May 2019). Meanwhile, in Punjab province, Tehrik-i-Taliban Pakistan (TTP) offshoot Hizbul Ahrar claimed a suicide attack near a popular Sufi Shrine in the provincial capital Lahore with 12 fatalities reported.
In Kashmir, two Pakistani civilians were reportedly killed in cross-border firing between Indian and Pakistani forces along the Line of Control (LoC).
Separatist violence in Thailand continued across Yala, Pattani, and Songkhla last week. In Yala, the wife of a village chief was reportedly shot and killed by suspected separatists. The violence comes as the results of Thailand’s general election in March were officially released. The military-backed Palang Pracharat Party (PPRP) now appears to be in a position to form a new government (Asia Times, 9 May 2019).
Fighting between the Myanmar military and Arakan Army (AA) continued last week. Civilians likewise continue to be targeted and accused of supporting the AA (for more on this, see this recent ACLED piece) with one motorbike driver reportedly shot and killed by the military in Kyauktaw township in Rakhine state. The Myanmar military and Kachin Independence Organization/Kachin Independence Army (KIO/KIA) also clashed last week in Shan state.
In other developments, elections remain a major theme in India, Indonesia, and the Philippines. In India, voters cast their vote in the fifth phase of the general elections on 6 May. Demonstrations and incidents of electoral violence continued to be reported across the country, especially in Jammu & Kashmir (J&K) and West Bengal. A high number of demonstration events was also reported from the state of Punjab, where voters are scheduled to cast their votes in the seventh and final phase of the general elections on 19 May. Last week, 15 people were reportedly killed in armed clashes with militants and amid electoral violence in India. Significant rioting activity was reported during voting and on the eve of voting in Pulwama and Shopian districts of J&K, as locals clashed with state forces, targeted polling staff and set alight voting centres (for more on this, ACLED is publishing a weekly infographic for each election phase – see last week’s India Election Monitor: Phase 4 infographic).
With official election results in Indonesia expected 22 May, there were a number of election-related demonstrations across the country. Demonstrations were held in Jakarta, East, West and Central Java, North and South Sumatra, and West Nusa Tenggara.
In the run-up to the 13 May midterm elections in the Philippines, there were 11 reported events concerning violence against government officials by unidentified assailants, resulting in seven reported fatalities. The elections look likely to consolidate President Duterte’s power (for more on this, see this recent ACLED piece).
In other news, a rare two-day protest was held in Vietnam concerning highway tolls. Drivers in Hoa Binh province protested against reduced tolls for locals, arguing that it causes increased traffic. A number of protests around toll booth policies have taken place in the country in past years. 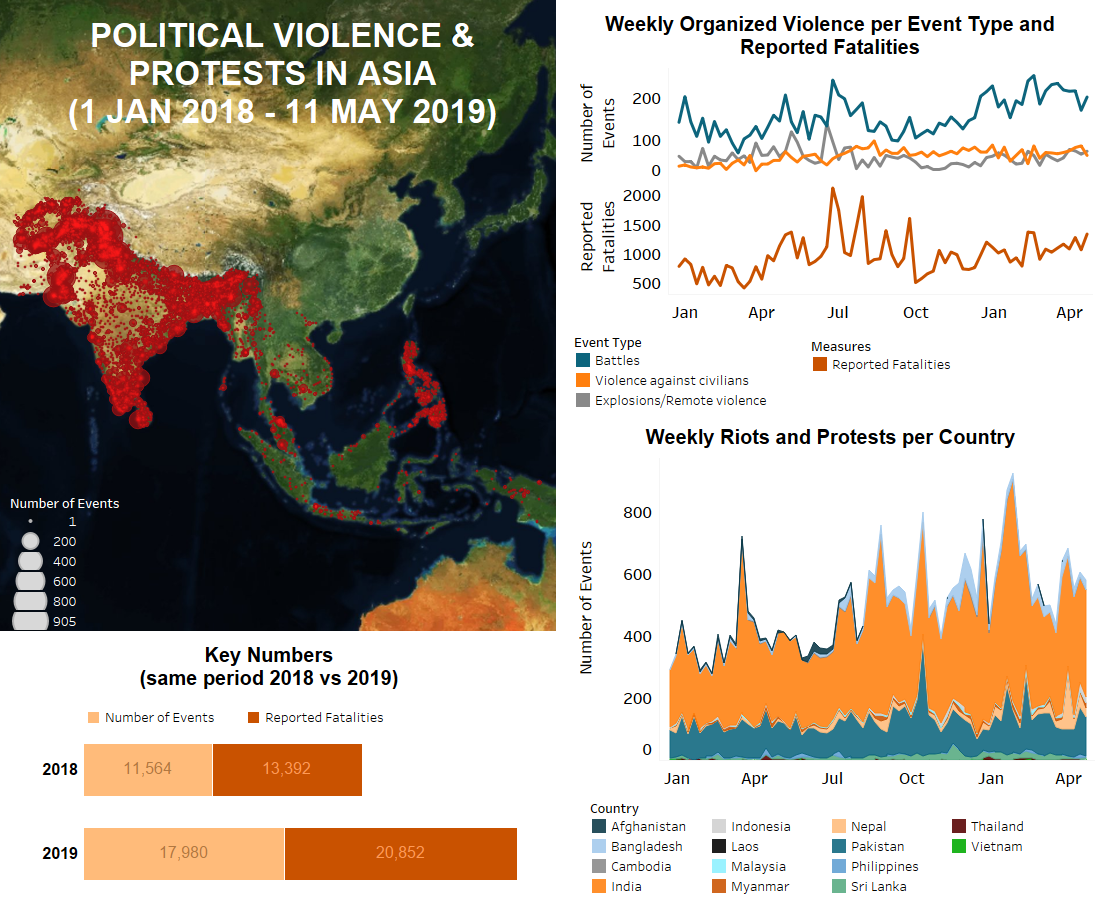