The biggest developments in the South and Southeast Asian region last week included escalating anti-Muslim riots in Sri Lanka and heavy fighting between Taliban and Afghan security forces in Afghanistan. Fighting between state forces and domestic rebel groups in Pakistan, Myanmar, Indonesia, Thailand, and the Philippines was also recorded as were demonstrations and election-related violence in India, Indonesia, and the Philippines.
In Sri Lanka, three weeks following the deadly Easter Sunday bombings, communal tensions escalated last week. Violence erupted on 13 May with large mobs attacking mosques and Muslim-owned businesses across the small island nation, forcing the Sri Lankan Government to declare a nation-wide curfew. Hardline Buddhist groups are likely to blame for the violence that has reportedly left one Muslim man dead so far. Meanwhile, in Myanmar, in response to a nationalist group harassing Muslims at Ramadan services in the Yangon region, a campaign showing support for Muslim communities was started with activists, including Buddhist monks, distributing white roses.
In Afghanistan last week, heavy fighting continued throughout the country as both the Taliban and Afghan security forces launched assaults as part of their spring offensives. As has been the case throughout 2019, the southeast of the country has been the main battleground, with the provinces of Ghazni, Kandahar, and Helmand being the most active (for more on recent conflict trends in Afghanistan, see this ACLED infographic). In the latter, fighting has been focused in districts surrounding the provincial capital of Lashkargah. Last week, a U.S. airstrike was called in to aid Afghan police after they were assaulted by Taliban just west of the city. However, the airstrike mistakenly hit police as well, reportedly killing 17 and injuring another 14 (VOA, 17 May 2019). Meanwhile, the nearby provinces of Urozgan and Zabul have also been heavily active. In the former, Afghan security forces appear to be on the offensive, attempting to dislodge Taliban from the areas in and around the capital of Tarinkot and the western districts of Chora and Khas Urozgan. On the other hand, state forces have played a more defensive role in Zabul thus far; last week, the Taliban reported that they captured the Sayywara area of Shinkay district after an hours-long battle.
Organized violence involving domestic rebel groups was reported from several other South and Southeast Asian countries as well. In Pakistan, separatist and Islamist groups continue to be active in Balocistan province. Last week, the Islamic State (IS) declared to have established an “Islamic State Pakistan Province” and took credit for the killing of a Pakistani police officer. This comes a week after IS proclaimed the establishment of a “province” in India’s Jammu & Kashmir state and can be seen as a renewed strategy by IS to gain a foothold in the region (VOA, 16 May 2019). Meanwhile, security forces stepped up their Intelligence Based Operations (IBOs) in Balochistan following a series of attacks in recent weeks. Last week, three suspected Baloch Liberation Army (BLA) militants and nine IS militants were reportedly killed.
Fighting between the Myanmar military and Arakan Army (AA) continued in Myanmar, spreading southwards to Ann township in Rakhine state (for more on the fighting in Rakhine state, see this recent ACLED piece). In Indonesia, the West Papua National Liberation Army (TPNPB) and Indonesian military clashed in Nduga regency in Papua province, resulting in the reported death of one military officer. A group of military officers had been on patrol around a construction site for the trans-Papua highway when they were attacked. As well, a series of explosions occurred across Yala province in Thailand’s deep south; the explosions were attributed to suspected separatists. Finally, a deadly clash between the New People’s Army (NPA) and the Philippine military occurred in Negros Occidental province in the Philippines.
In other developments, elections remain a major theme in South and Southeast Asia. In India, the sixth phase of the general election was held on 12 May. Demonstrations and incidents of electoral violence continued to be reported across the country, especially in Jammu & Kashmir (J&K) and West Bengal as well as several states where elections were held previously or were going to be held in the final phase on 19 May. Last week, 22 people were reportedly killed in armed clashes with militants and amid electoral violence in India (for more on this, ACLED is publishing a weekly infographic for each election phase – see last week’s India Election Monitor: Phase 5 infographic). In Indonesia, there were a few protests staged over the recent election; official results are expected to be announced this week. Several election-related protests were likewise held in the Philippines by students across several universities over irregularities in the midterm elections. A number of candidates were violently targeted during the last week as well (for more on the midterm elections, see this recent ACLED piece).
In other news, a protest in Myanmar was met with force when police fired rubber bullets at villagers who were protesting against the coal-powered Alpha Cement plant in Aung Tha Pyay village in the Mandalay region. Several protesters were injured. Protests against the plant have occurred frequently in recent years. 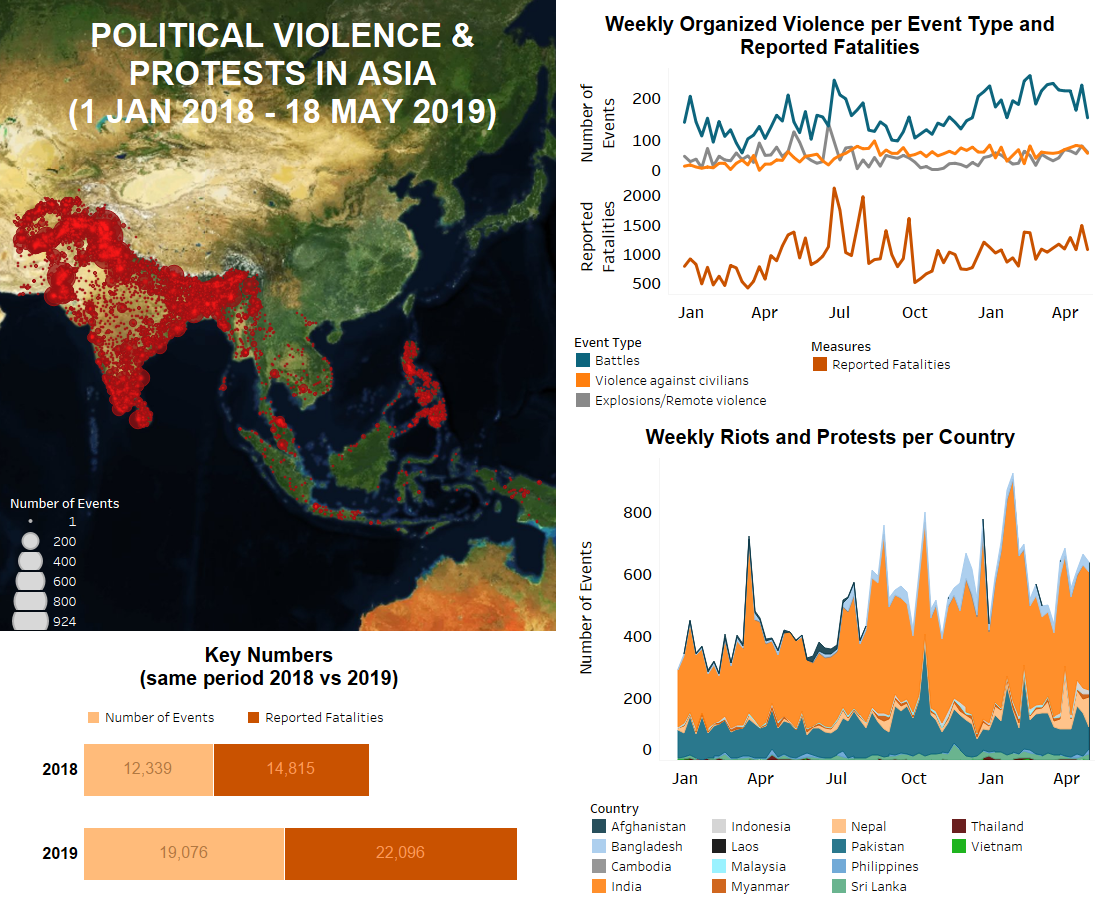