The biggest developments in the South and Southeast Asian region last week included heavy fighting between Taliban and Afghan security forces in Afghanistan and deadly post-election violence in India and Indonesia. Fighting between state forces and domestic rebel groups continued in Pakistan, India, Myanmar, Thailand, and the Philippines.

In Afghanistan last week, heavy fighting continued throughout the country as both the Taliban and Afghan security forces launched assaults as part of their spring offensives. The Southeast continues to be the main battleground, however, there was also heavy fighting further west in the provinces of Herat and Ghor. In the latter, Afghan commandos, supported by airstrikes, reported killing a large number of the Taliban militants in Shahrak district. A similar number of Taliban’s Red Unit fighters were reportedly killed in Ghazni’s Qarabagh district as Afghan security forces attempted to reassert control over the contested province. Meanwhile, there was an increase in the number of suicide bombings and attacks on civilians in Kabul city last week. These follow the bombing of a mosque the week before. Of the two suicide attacks last week, one was claimed by the Islamic State (IS), who view Ramadan as a holy month for jihad and typically increase activity during this period (Reuters, 21 May 2016).

Also of note were two military operations in Zabul and Helmand which freed 60 prisoners from Taliban prisons – a mix of civilians and security forces. These operations followed shortly after the release of a UN report which expressed deep concern over reported mistreatment in Taliban prisons (UN News, 26 May 2019).

Lastly, a second round of talks took place last week in Moscow between Taliban negotiators and Afghan opposition leaders, including former president Hamid Karzai. Separate from the ongoing peace negotiations in Qatar between the Taliban and U.S. representatives, the Moscow talks similarly excluded members of the ruling Ghani administration, whom the Taliban consider to be illegitimate. Both sides claimed that “decent progress” had been made, although the Taliban rejected a call for a ceasefire (Al Jazeera, 30 May 2019).

In Pakistan, domestic militant groups continue to be active in Balochistan and Khyber Pakhtunkhwa province last week, notably targeting places of worship. In Quetta town, security forces foiled a suicide bombing attempt at an imambargah (a Shiite ceremonial congregation hall). Meanwhile, in Khyber Pakhtunkhwa province, an armed clash between the Pakistan Army and activists belonging to Pashtun Protection Movement (PTM), a Pashtun rights movement, led to the arrests of two members of the national assembly, suspension of telephone lines and the imposition of a curfew in North Waziristan district. A rise in violence against security personnel has been recorded in the restive tribal district of North Waziristan in recent months. Last week, two Pakistan Army soldiers were reportedly killed in two separate attacks by suspected militants.

In Myanmar, fighting between the Myanmar military and Arakan Army (AA) was particularly deadly in Paletwa township in Chin state last week. The military shelled AA positions in the area for two consecutive days.

Separatist violence in Thailand increased last week across the four southern provinces, leading to a reported eight deaths. Notably, a high-ranking leader of Runda Kumpulan Kecil was reportedly killed in a shoot-out with police. In response to the violence, some 400 people protested in Pattani, calling for an end to the separatist targeting of public spaces.

Elections remain a major theme in India and Indonesia. In India, following the release of the general elections results on 23 May, post-election violence has been recorded across the country (for more on the Indian general elections, see this past ACLED piece). Post-election violence has been most significant in West Bengal and Tripura, where clashes between members of rival political parties – especially the Bharatiya Janata Party (BJP) and the Trinamool Congress Party (TMC) – reportedly left nine people dead.

In Indonesia, four people in Papua were reportedly killed in post-election violence. Peaceful protests were also held by those calling for an investigation into the deadly riots that occurred in Central Jakarta the previous week. A formal challenge to election results was filed last week by the losing candidate (The Diplomat, 30 May 2019).

In other developments, land disputes led to demonstrations in Cambodia as protesters gathered in front of the Chinese embassy calling for a resolution to a dispute between locals and a Chinese company. In Kayin state in Myanmar, farmers protested the confiscation of their lands by authorities.

Meanwhile, after the midterm elections in the Philippines, violence against drug suspects has continued and increased last week. There were 23 reported deaths from police drug raids. 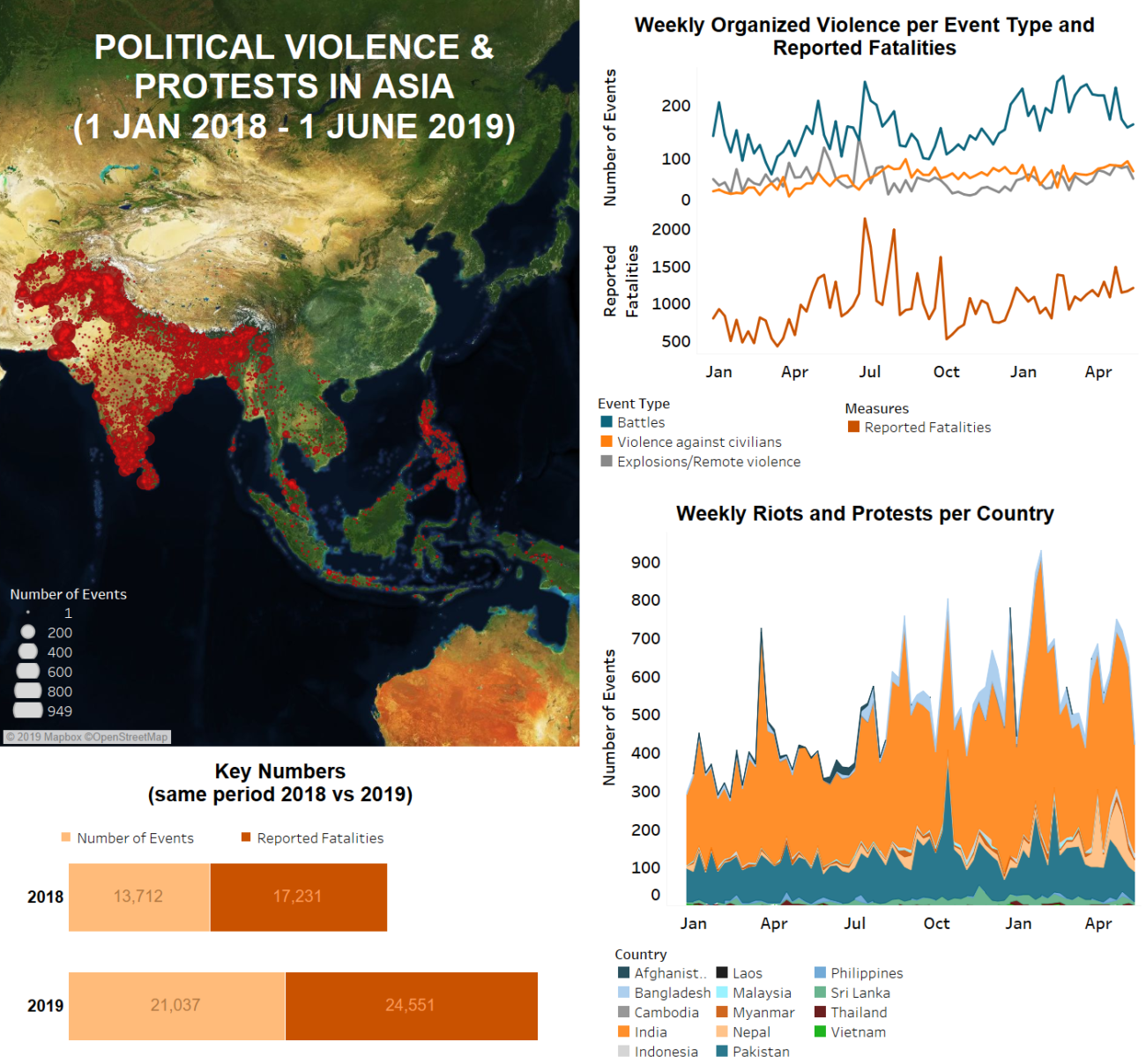