Protests for International Quds Day were held in Iran, Bahrain, Turkey, Yemen, Iraq, and Lebanon. International Quds Day is held annually on the last Friday of Ramadan to voice support and solidarity with Palestinians and occupied East Jerusalem (Al Quds in Arabic). Quds Day protests were started by the government of Iran in 1979 to express opposition to Zionism and the Israeli occupation of Jerusalem. Last week the majority of Quds Day protests were held in Iran, but many protests were also held in Bahrain, Yemen, and Turkey. Smaller protests were held in Lebanon and Iraq. Iran reportedly promoted the protests this year particularly in opposition to the awaited ‘Deal of the Century’, the anticipated Middle East peace plan that is expected to be released by the Trump administration. While there were no reported protests for Quds Day in Jordan, there was a protest held outside of the American Embassy in Amman against the ‘Deal of the Century’ that was attended by hundreds of Jordanians.

In Iraq, state-sponsored Quds Day protests took place and were supported by the Popular Mobilization Forces (PMF), yet turnout among residents was reported to be low (Al Monitor, 31 May 2019). The Sadrist protests against corruption and the rejection of Iraq’s involvement in the US-Iran conflict were more popular demonstrations. This trend likely points to the general public’s hesitance to be closely allied to Iran in light of the growing tensions between Iran and the US.

Aside from the Quds Day protests, in Turkey there was a general reduction in demonstrations due to the end of the prisoner hunger strike. In recent weeks, many protest events have been in solidarity with hunger strikers demanding improved conditions for Kurdish leader Ocalan. Following a call from Ocalan, several Kurdish lawmakers and thousands of inmates ended their hunger strikes. The Turkish government has allowed Ocalan to see his lawyers for the first time since 2011 (Reuters, 26 May 2019).

Meanwhile, in Iraq there was also a rise in Islamic State (IS) attacks targeting the Tribal Mobilization Forces (TMF) and burning civilian agricultural areas in Sala al-Din and Kirkuk provinces. Six bombs were reported in Kirkuk that are suspected to have been planted by IS. In Syria, IS attacks continued across several areas of the north and northeast where IS fighters ambushed a convoy of the Syrian army near Sokhna, reportedly killing 17 Syrian army soldiers. There were also two attacks against the Syrian army in Deir-ez-Zor. In Ar-Raqqa, IS sleeper cells launched two remote attacks against Syrian Democratic Forces (QSD) in the city, reportedly killing several QSD fighters as well as five civilians.

Clashes continued in the Greater Idleb area of northwestern Syria, particularly in Hama province, between regime and rebel forces. Regime forces continue to attempt to infiltrate rebel positions in Hama province to achieve territorial gains. Despite the use of intensive airstrikes conducted by Russian and regime forces, no advances were made by the regime forces. Regime and Russian shelling in the Greater Idleb area reportedly killed at least 89 civilians and injured many others.

On Saturday, two rockets were fired from Syrian territory toward the Israeli-occupied Golan Heights. One rocket hit Mount Hermon while the other reportedly landed in Syria (Haaretz, 3 June 2019). Israel responded by targeting a number of military sites in Quneitra province in Syria. Among the targets were two artillery batteries, several observation outposts in Quneitra, and an air defense battery. Syrian air defenses reportedly intercepted several missiles launched from the Golan Heights over a Damascus suburb, after reports of Israeli strikes on the area (Times of Israel, 4 June 2019). There were also reports that warehouses connected to Hezbollah and Iran in southern Damascus were targeted and destroyed. The Syrian Observatory for Human Rights reported that ten fighters were killed, three were reported to be Syrian army soldiers while the rest were reported to be Iranian and Hezbollah militants.

Meanwhile, the Israeli parliament (Knesset) voted to dissolve itself after Netanyahu was unable to form the necessary coalition for a government. A second election is set to be held on 17 September (NPR, 29 May 2019).

In Yemen, battles continued to occur at high frequencies in Ad Dali governorate, Taiz governorate, and Aden city. In Ad Dali governorate, most fighting took place in Qaatabah district where UAE-backed forces, local militias, and pro-Hadi military brigades all participated in battles against Houthi forces in the area. Fatality counts were high throughout the week. In Taizz governorate, battles significantly increased as pro-Houthi forces and anti-Houthi forces and militias fought for positions on the north and west edges of Taiz city. This could be a result of the rearranging of several military groups due to the departure of Abu Al Abbas-linked militias from Taiz and the regrouping of Al Islah affiliated military groups. It appears that the new brigades deployed into contested areas are willing to engage with long-held Houthi positions. Unrest returned to Aden city near the end of the week as clashes erupted following the death of a young man in a Security-Belt operated prison. Aden currently hosts a multitude of armed groups that often create brief armed confrontations. 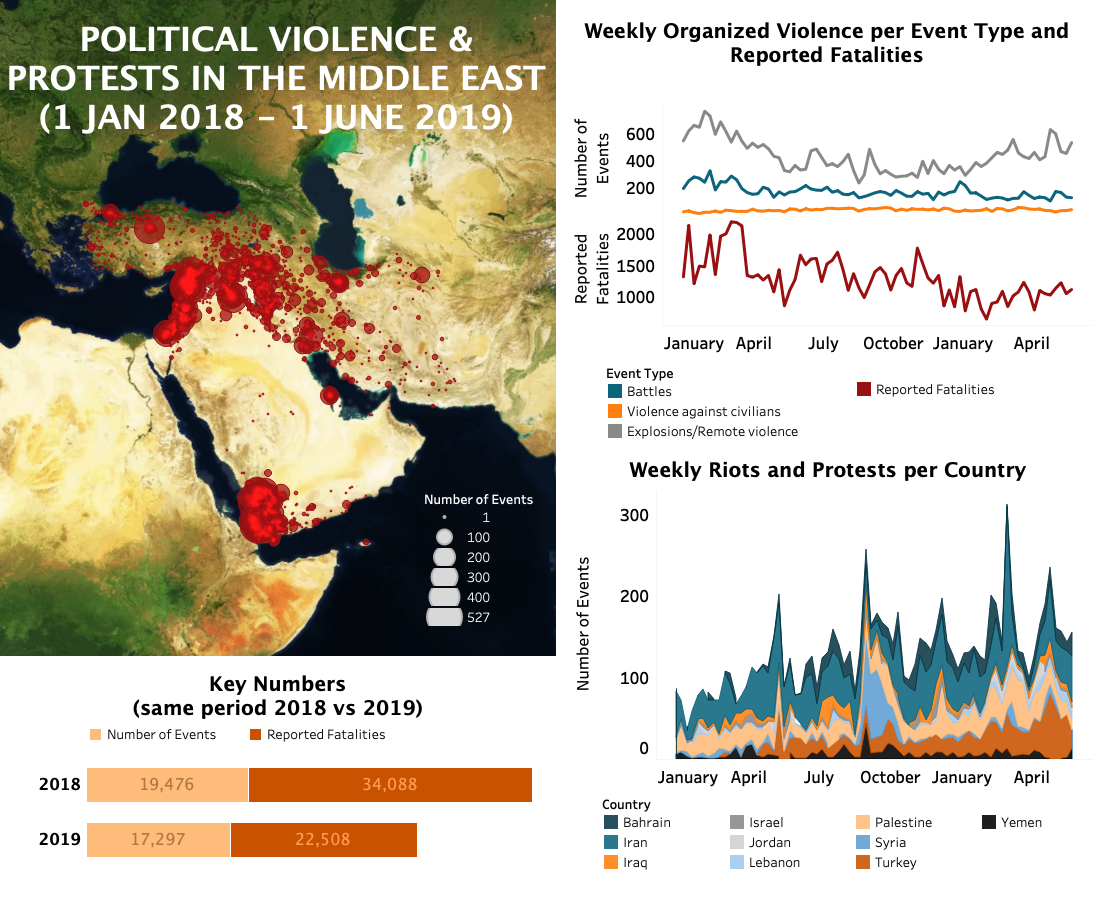