Developments in the Middle East region last week included a general reduction in reports of conflict, likely a result of the end of Ramadan and Eid al Fitr celebrations taking place across the region, as well as a reduction in reporting as a result of some news agencies not publishing during this period due to the holiday. Reported trends remained consistent with the week before; however, notable developments occurred in Lebanon and Jordan – two countries that have been relatively quiet for the last year. Also, clashes in Palestine took place between worshippers and police, both Israeli and Palestinian, around the Eid al Fitr holiday. Meanwhile, there were several updates in ongoing armed conflicts in Iraq, Syria, and Yemen.

Last week in Lebanon, residents of Tripoli were shaken by an attack in the northern city of Tripoli on 3 June. An armed attacker fired at an Internal Security Forces (ISF) vehicle in El Mina at the entrance to Tripoli, reportedly killing two police officers. He then proceeded to open fire inside the city at ISF as well as military forces before hiding in a residential building. After a two-hour standoff, he detonated a suicide belt reportedly killing himself, two members of the Lebanese military, and injuring many people. The attacker reportedly served a year in Lebanese prison after fighting with the Islamic State (IS) in Syria (Al Monitor, 9 June 2019). No group claimed responsibility for the attack. Sit-ins were held by trade unions, civil and political figures, as well as retired members of the armed forces on 5 June to show solidarity with the Lebanese armed forces following the attack.

Moreover, an accidental fire in an informal refugee camp, Delhamiyeh, in Lebanon north of Baalbek resulted in clashes between firefighters and Syrian refugees. The altercation allegedly took place as the firefighters were accused of intentionally arriving late to extinguish the fire, though others claimed that the firefighters may have driven over tents (Al Jazeera, 9 June 2019).  Dozens of Syrian refugees were arrested after the incident and more tents were set on fire, likely by Lebanese locals with anti-refugee sentiments (Asharq Al-Awsat, 8 June 2019). On 7 June, Lebanese authorities decided to close the camp, forcing its 600 inhabitants to move to other camps.

In Jordan, state mismanagement of water resources appears to be a catalyst for recent violence; on 2 June, employees of the Jordanian Water Authority came under live fire in Eraq in Karak’s Southern Mazar district by an unidentified group. Later in the week, residents of the town of al-Ghuwair, east of Karak, closed the water supply at the pumping station, which supplies water to the Karak governorate, in protest against water shortages faced by the town.

Meanwhile, in Palestine, notable clashes took place on Sunday and Monday as Ramadan drew to an end. On Sunday, the annual flag parade was held by tens of thousands of religious Zionist Israelis to celebrate Jerusalem Day. Jerusalem Day is an Israeli celebration of the ‘reunification’ or occupation of East Jerusalem following the 1967 war. Prior to the parade, Israeli forces entered Al Aqsa compound causing major clashes that injured at least 45 Palestinians. Return March demonstrations in Gaza were not held this week due to Eid celebrations.

Across the region, various political divides and religious interpretations resulted in some Muslims celebrating Eid al Fitr on Tuesday, while others began celebrations on Wednesday. In the West Bank, the Palestinian Authority (PA) security forces assaulted and arrested followers of al Tahrir Party, a Salafist group, and prevented them from performing the Eid prayer at the Al-Abrar mosque in Hebron. PA forces said the group had violated the decision of the PA grand mufti who announced that Eid would commence on Wednesday (Middle East Eye, 7 June 2019).

In Turkey and Iraq, armed clashes continued between Turkish military forces and the Kurdistan Workers’ Party (PKK) in eastern Turkey and in Iraq. Turkish Military forces continued ‘Operation Claw’ targeting Kurdistan Workers’ Party (PKK) locations by ground and air in Erbil and Dahuk governorates of Iraq. The Turkish government has reported that 43 PKK members have been ‘neutralized’ (killed, injured or captured) so far during the operation. They have also reportedly destroyed 53 landmines and IEDs and 74 shelters used by the PKK (Reuters, 8 June 2019).

Clashes continued in the Greater Idleb area of northwestern Syria, where rebel factions led by Hayat Tahrir al-Sham (HTS) battled regime forces and seized control of four villages in Hama governorate. The next day, on 7 June, regime forces took back control of one of the villages where clashes are still on-going, accompanied by the intensive regime and Russian airstrikes. Regime and Russian shelling and airstrikes in the Great Idleb area reportedly killed 48 civilians last week.

Finally, in Yemen, Houthi forces claim to have launched a major offensive against the southern border of Saudi Arabia‘s Najran province, reportedly taking control of several military sites and reporting high fatality counts. Saudi media sources have yet to comment on these Houthi claims.

While minor skirmishes and shelling continued on a daily basis near Hodeidah city, the fighting has mostly shifted to areas of Ad Dali and Hajjah governorates, with forces being re-deployed for battle. In Ad Dali, little territorial change was accomplished last week, with most battles happening in Qaatabah and Murays areas of the governorate. 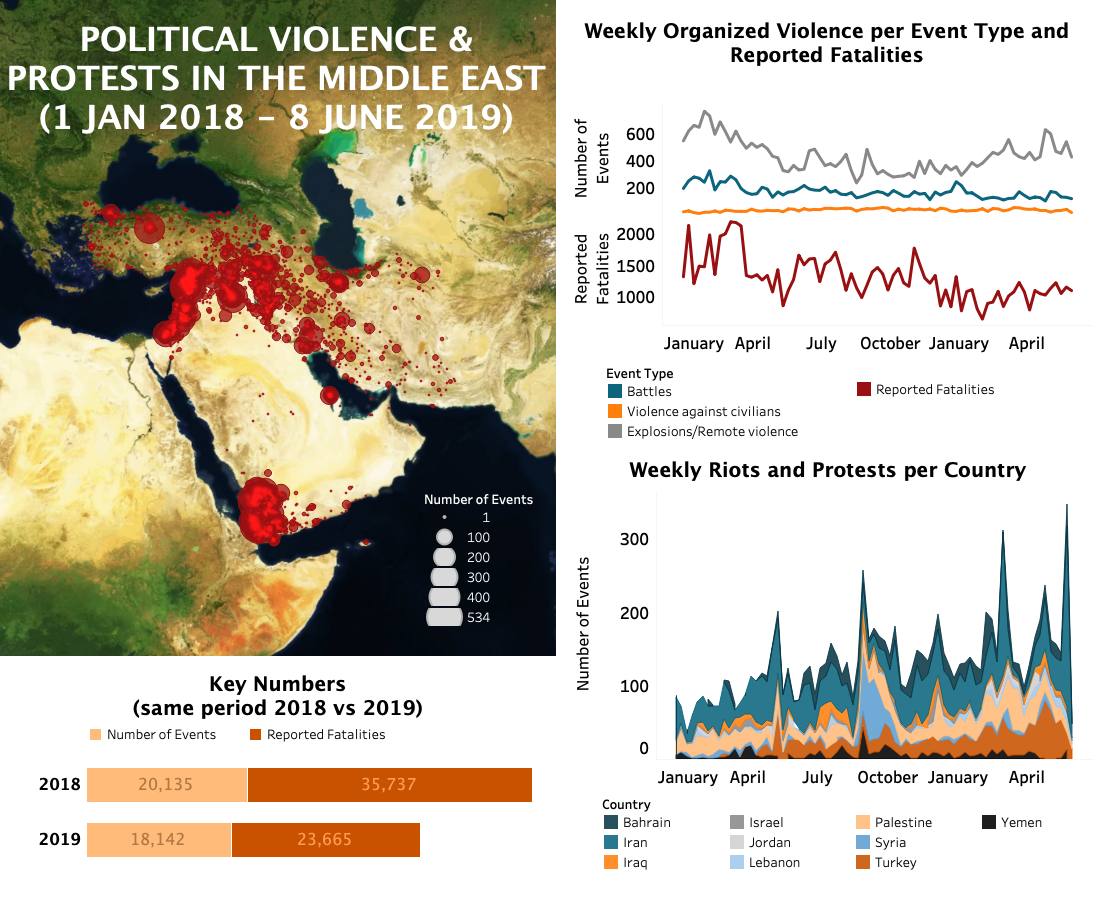