Key developments in Africa in the week of June 9th include intercommunal violence in Mali and the Democratic Republic of Congo, while IS-backed Boko Haram carried out attacks on security forces in northern Cameroon and Nigeria. In addition, protests continued in Sudan despite the brutal crackdown by security forces last week.

In central Mali, an armed group suspected of being a Fulani militia, attacked the village of Sobame Da, on June 10th, killing 35 ethnic Dogon, including 24 children. The attack comes amidst a cycle of communal violence and retaliatory attacks between the Dogon and Fulani, which has been exacerbated by the Islamist insurgency in the region. Days after the attack, on June 12th, the villages of Nongopere and Oboboro, which are primarily inhabited by Dogon, were attacked by armed men on motorcycles, resulting in one fatality. Following these attacks, the Governor of the Mopti region was dismissed. The government also called for an increased presence of peacekeepers from the United Nations Multidimensional Integrated Stabilization Mission in Mali (MIUNSMA) within the central region.

In the Democratic Republic of Congo, communal violence between Hema and Lendu groups plagued the Djugu territory of the Ituri province this week, resulting in 50 reported fatalities. On June 10th, near Zibiti, a Hema militia ambushed and killed four members of the Lendu group, prompting demonstrations and reprisal attacks. Attacks also occurred on June 11th, with an armed group killing 38 civilians in Tche, Djugu. Meanwhile, other parts of the country experienced protests and violent demonstrations after the constitutional court ruled on several electoral disputes, in which opposition candidates were ruled against and replaced with members of the People’s Party for Reconstruction and Democracy (PPRD), former-president Joseph Kabila’s party. The court ruling has again called into question the extent to which the PPRD maintains political control and influence in Congo.

Boko Haram carried out a number of attacks in Cameroon and Nigeria this week. On June 12th, an estimated 300 Boko Haram combatants launched an attack on a military base in Darak, Cameroon. Reinforcements were deployed to repel the attackers. The clash resulted in a reported 16 military, eight civilian, and 64 insurgent fatalities, making it the deadliest recorded Boko Haram attack in the country since 2015. The scale of the attack may point to a strengthening of the group’s presence in the region. The group also looted Kolofata on June 12, but military forces intervened, killing three assailants. The following day, Boko Haram combatants killed two civilians in Tagawa, Mayo Sava. In the Anglophone region, security forces continue their operations against Ambazonian Separatists. The operations continue to be marred with violence against civilians, as soldiers scorched homes and killed at least 12 civilians in Essu, Menchum this week.

Across the border, in Nigeria, IS-backed Boko Haram attacked a military base in Kareto on June 14th. The attack forced the withdrawal of military forces from the base and resulted in one military fatality. The insurgents seized weapons and vehicles from the base. Violence also erupted in the Shiroro area of Niger state, as 62 civilians were killed by an unidentified armed group during attacks on eight villages in the region.

Following last weeks brutal crackdown on protesters in Sudan, demonstrators continued to take to the streets demanding a civilian-led government. Despite the shutdown of the internet within the country, demonstrations were held in Khartoum, Port Sudan, and Omdurman. Violent attacks were reported in the Deleig area of Darfur on June 10th, resulting in 17 fatalities and over 100 homes destroyed. While the internet blackout has made it difficult for details to emerge, witnesses and reports indicate that the attack was carried out by the Rapid Support Forces (RSF). The attack on Deleig has renewed questions on the draw-down of the United Nations – African Union Hybrid Mission in Darfur (UNAMID). This week, the agency announced its suspension of handing former bases over to the RSF during their withdrawal, a policy which had been mandated by the Transitional Military Council (TMC). 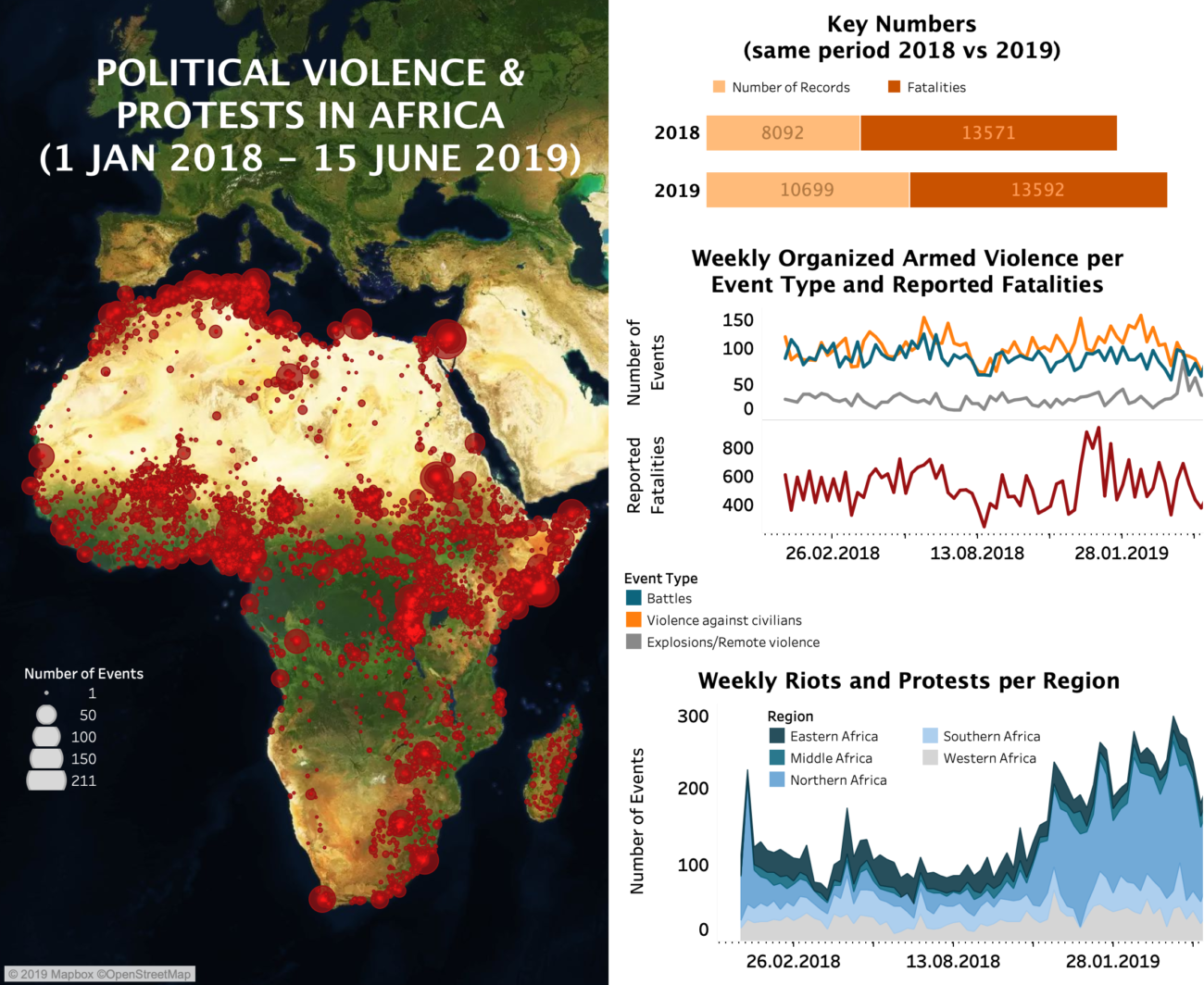 Maya Moseley is an Africa Research Manager with ACLED. Maya holds a MA in Migration and Refugee studies, with a focus on socio-economic dynamics surrounding internal displacement within host communities. Maya’s past experience includes work for a monitoring and evaluation consulting firm in East Africa, as well as NGO program management in Central Africa.
18 June 2019
Share
TweetShare on Twitter Share on FacebookShare on Facebook Share on LinkedInShare on LinkedIn