There were a few major developments last week in the Middle East region, notably the attack on two oil tankers in international waters in the Gulf of Oman near the Strait of Hormuz. Additionally, renewed rocket fire and airstrikes in southern Israel and Gaza broke the period of relative calm that has lasted a month. Meanwhile, there were several updates in ongoing armed conflicts in Turkey, Iraq, Syria, and Yemen.

On 13 June, for the second time in a month, two oil tankers were attacked amid escalating tensions between Iran and the United States. The US was quick to attribute the attack to Iran, though Iranian officials have claimed no involvement. The Norwegian owners of the first ship stated that the cause of the explosion on board was unknown, but that they had ruled out the possibility that it was due to human or mechanical error (BBC, 18 June 2019). Tanker management for the second ship said that it had sustained damage during a security incident. Its owner said that the ship was hit by a ‘flying object,’ but the US military said the damage on the boat was consistent with a limpet mine attack, a weapon used by the Iranian navy (Radio Farda, 17 June 2019). The US reportedly will send a thousand more troops to the Middle East in light of recent tensions (BBC, 18 June 2019). Additionally, Iran has announced that it will exceed its stockpile limit of enriched uranium on 27 June, which would violate the 2015 nuclear deal (BBC, 17 June 2019).

Domestically in Iran, protests have continued across the country against unpaid salaries. Government mismanagement, corruption, and US sanctions all contribute to Iran’s worsening economic crisis (RFERL, 19 November 2018).

Meanwhile, in Israel and Palestine, beginning on 10 June, at least three incendiary devices were launched from the Gaza Strip into Israel causing fires in southern Israeli communities. Following the last exchange of rockets and airstrikes in May, incendiary device fires have been less common up until last week. On 11 June, Israel restricted the fishing zone around Gaza in response to the fires and the next day Israel closed the fishing zone entirely (Al Jazeera, 12 June 2019). On 13 June, the Israeli military reported that they intercepted a rocket from the Gaza Strip and responded by conducting airstrikes on Hamas infrastructure (Al Jazeera, 13 June 2019). Neither the airstrikes nor the rocket fire resulted in any reported fatalities.

Fires are also devastating the countryside of Iraq and Syria. Beginning in May, tens of thousands of acres of farmland have been burned in Iraq and Syria, and many of the fires have been claimed by the Islamic State (IS) (Washington Post, 7 June 2019). Last week in Iraq, fires continued to rage in wheat fields in Ninewa and Kirkuk provinces. The Civil Defense stated that many of the fires were deliberate arson by militant groups and rival tribes, while others have resulted from faulty farming machinery and electrical surges.

Furthermore, fighting continued in strategic areas in Syria and Yemen, though little territorial exchange occurred in either country. The battle for the Greater Idleb region of Syria continued last week between the regime and rebel forces. The regime forces supported by Russian aircrafts continued their attempts to regain territory. They launched several unsuccessful attacks to regain control of the strategic areas of Jbine and Tal Milh in order to re-open the road between Muhradah and As-Suqaylabiyah, Hama governorate. In Lattakia governorate, the regime and Russian forces maintained intensive airstrikes and shelling in Kabani area but were unable to gain any ground. Fighting in Greater Idleb has seriously impacted the civilian population where at least 71 civilians were reportedly killed last week.

In Yemen, armed clashes continued to occur across all major Houthi/anti-Houthi fronts throughout last week. Intense fighting was reported in Qaatabah district of Ad Dali, the outskirts of Hodeidah governorate, and along the border of Saudi Arabia. Despite high reported fatalities on all battlefronts, little territorial change took place.

Houthi forces continued an intensified assault on Saudi Arabia’s southern border, with major battles being fought in Asir, Jizan, and Najran regions. Houthi forces attacked Saudi infrastructure using drones strikes and ballistic missiles. On 12 June, a Houthi-fired missile hit Abha International Airport, injuring 26 civilians. A second missile was intercepted over Abha on the 15 June.  Five explosive-laden drones were intercepted and destroyed on 14 June near the airport in Abha and over Khamis Mushayt city.

Meanwhile, a number of protests took place across southern and central Yemen, highlighting growing discontent with the pro-Hadi government and the lack of services and governance. Protesters gathered in Hadhramawt demanding the re-opening of the Mukalla Airport, while angry demonstrators in Aden blocked roads and burned tires as they expressed frustration at electricity cuts. Protesters in Ataq demonstrated against the recent arrest of a local leader by UAE-backed forces. Soldiers from the 19th Brigade blocked the road between Shabwah and Ma’rib governorates, and Abu-Al-Abbas militiamen blocked roads in Taiz governorate, refusing to let vehicles pass until salaries were paid. 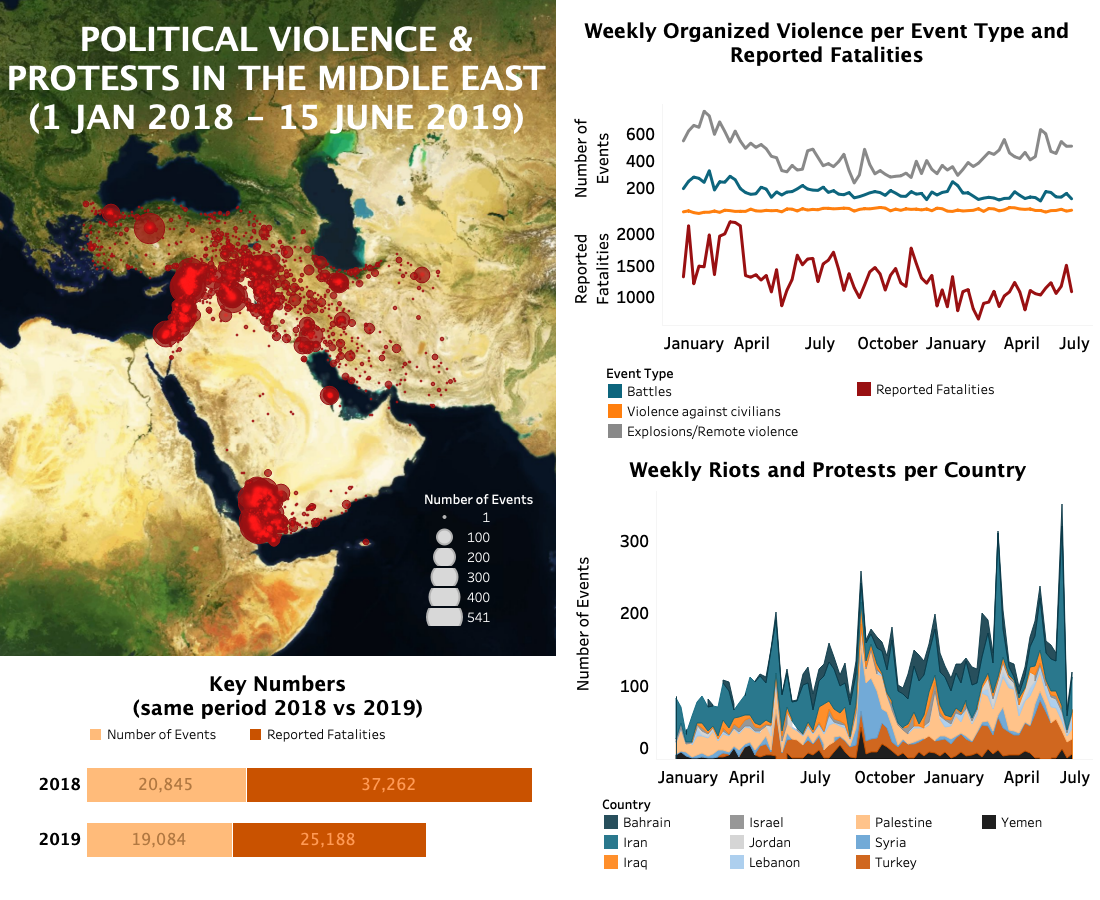