Notable developments in Africa during the week of June 16th include an attempted coup d’état in Ethiopia, a sharp escalation of communal violence in the Ituri province of DRC, continued inter-communal violence in central Mali and Nigeria, and political protests in Algeria.

Details are still emerging from an attempted coup d’état in Ethiopia, reportedly orchestrated by General Asamnew Tsige, the head of security for Amhara state. During the attempted coup, the regional head of Amhara, Ambachew Mekonnen was killed, along with an advisor in the regional capital of Bahir Dar. Gunfire was reported in the city during the evening of the 22nd. In a related attack in Addis Ababa, Seare Mekonnen, the Military Chief of Staff, along with another general were shot and killed by a bodyguard. The attacks came days after a video of Tsige calling for Amhara to arm themselves. Calm has been restored, but the attack underscores the mounting opposition to Prime Minister Abiy Ahmed’s government.

In the Democratic Republic of Congo,  the communal conflict between the Hema and Lendu in the Dujug territory of Ituri has increased drastically, as a reported 291 people have been killed in a series of retaliatory attacks since June 11th. During the past two weeks, numerous villages have been attacked by militias, which have also clashed with military forces in the region. An estimated 300,000 people have been displaced by the recent attacks, amidst reports that militias are preventing others from fleeing. The Hema, who are predominantly pastoralists, and Lendu, who are predominantly farmers, have a history of inter-communal conflict, dating back to the late 1990s, with the most recent surge in late 2017 into early 2018. While the Ituri province has experienced relative calm since then, these attacks represent a serious threat to stability in the province.

Inter-communal violence persisted in central Mali, as suspected Katiba Macina/Group for Support of Islam and Muslims (JNIM) militias attacked the predominately Dogon villages of Gangafani and Yoro. The attacks left a reported 41 dead. Following the attack, military forces reported undertaking operations targeting militias in the Yoro area. Dan Na Ambassagou militias attacked the Fulani villages of Dougambo Dogolo and Ndiombo in Mopti, killing five civilians. The Mopti region remains one of the most unstable regions of the country, as militants and communal militias continue to target civilians, despite military operations.

In Nigeria, a triple suicide bombing was carried out in Konduga by Boko Haram on June 16th, resulting in 30 reported fatalities. According to reports, the bombers were children – two girls and one boy – continuing the group’s reliance on women and children for suicide attacks. The attack was the deadliest suicide bombing carried out in the country since June 2018. Military forces carried out a series of operations against ISWAP/Boko Haram camps this week, resulting in 42 fatalities during operations in the Baga area. Beyond the Boko Haram threat, inter-communal conflict continues to undermine security within the country. Despite the signing of a peace agreement between Tiv and Jukun leaders on June 11th, inter-communal violence persisted this week between the groups in Wukari. A cycle of retaliatory attacks this week resulted in 22 civilian fatalities. The clashes, which began in April, have continued unabated despite the peace agreement. Without a meaningful peace deal and enforcement by security forces, the groups are likely to continue their attacks on the local civilian population.

Anti-regime protests have entered their 18th  week in Algeria. Across the country, demonstrators continue to demand the removal of remnants of Bouteflika’s regime and the resignation of army General Ahmed Gaid Salah. While the protests have been predominantly peaceful, security forces have targeted and arrested demonstrators carrying Amazigh flags. While Salah and political elites have unsuccessfully attempted to appease the masses through corruption probes, it remains to be seen if they will bend to the continued public pressure or resort to violent suppression. 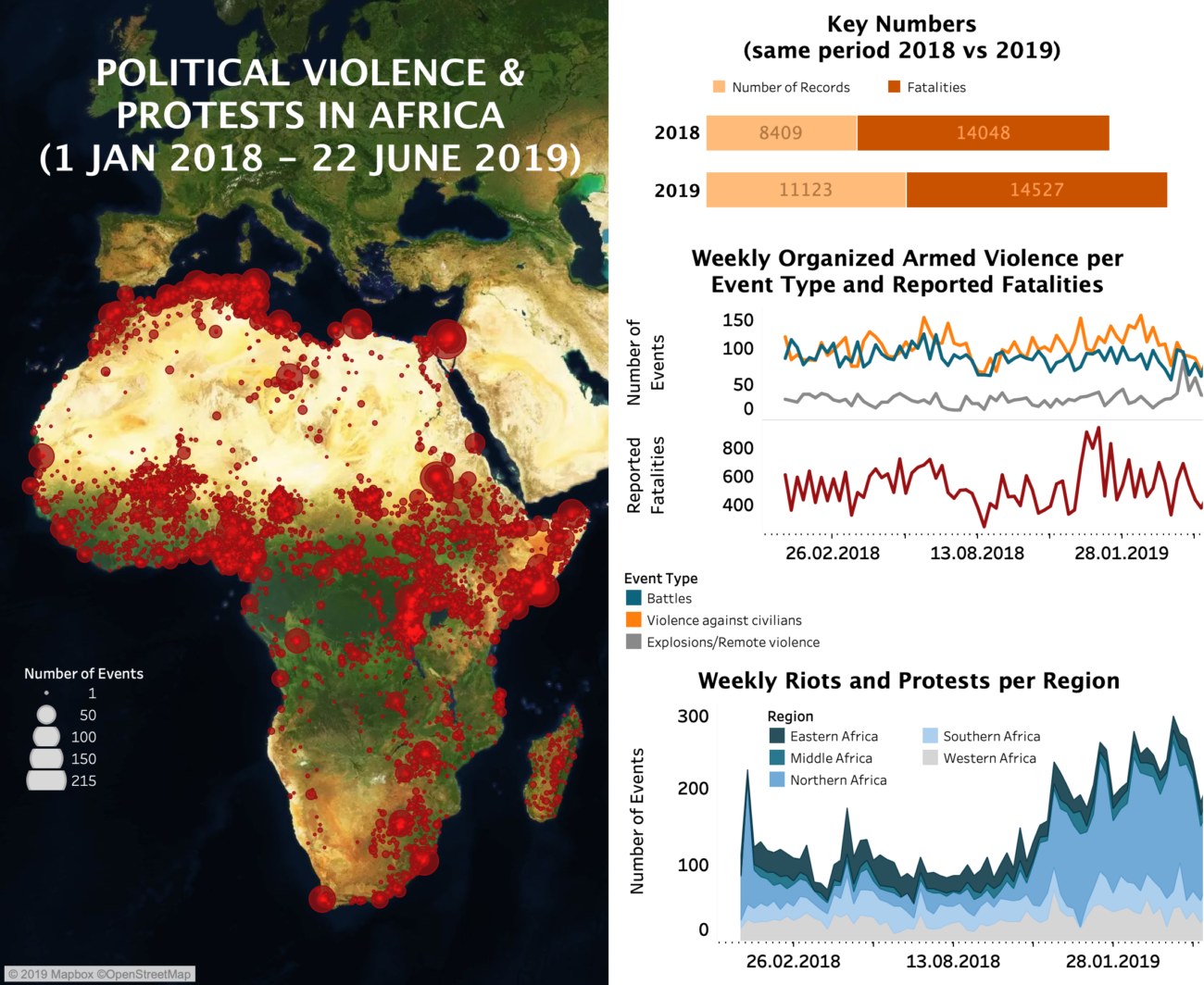