The key trends and developments in the South and Southeast Asian region last week included increased fighting and further peace talks in Afghanistan; attacks on civilians in Cambodia, Thailand and India; militant infighting in India’s Jammu & Kashmir; and intensified demonstrations over the growing water and power supply crisis in India.

In Afghanistan, there was a significant rise in reported violence across the country last week as both Afghan forces and the Taliban clashed on multiple fronts. In newly launched offensives, Afghan forces fully captured Bilchiragh district, Faryab province, and villages surrounding the provincial capital of Maymana. The Taliban took control of Bilchiragh during their 2018 spring offensive which aimed to further extend their provincial reach outside of their stronghold in Pashtun Kot district. Faryab has been one of the country’s most contested provinces for years, and the Taliban still controls a significant amount of territory there. Besides Maymama being one of Afghanistan’s largest urban centres, control of the province also allows for easier access to foreign fighters both across the border and within its minority communities. Villages in Argo, Badakhshan province, were also captured by Afghan forces last week. The Taliban, on the other hand, seized lands in Kajran and Tulak districts – small districts in central Afghanistan without obvious strategic value.

In the east, Islamic State (IS) fighters carried out attacks against Afghan police in Kabul and clashed with the Taliban in Sherzad district of Nangarhar province. This is the second week in a row that IS and Taliban have clashed in the east – a trend that appears to be on the rise as IS attempts to extend its Afghan territory following losses in Iraq and Syria.

Moreover, two US soldiers were reportedly killed in Urozgan province during clashes with the Taliban last week – the first US fatalities since early May 2019. These deaths occurred just days before the seventh round of peace talks in Doha, Qatar, between the Taliban and the US representatives. Despite last week’s rise in violence, NATO Secretary-General Jens Stoltenberg had said that a peace deal is closer than ever (Khaama Press, 26 June 2019). US Secretary of State Mike Pompeo echoed these sentiments and stated that his country is ready to pull troops out of Afghanistan, which is main demand of the Taliban (CNN, 25 June 2019). This round of talks follows previous talks with the US in Doha and more recent talks between the Taliban and Afghan opposition members in Russia and Pakistan. However, there is a concern that a peace deal will not result in an immediate reduction in violence given that the Taliban’s main opponent, the Afghan government, has yet to be included in the talks.

In India, militant infighting between combined Lashkar-e-Taiba (LeT) and Hizb-ul-Mujahideen (HM) forces and IS was reported in Jammu & Kashmir. Tensions between pan-Islamist and traditional separatist/pro-Pakistan elements have been on the rise recently. Most notably, in 2017, the late militant leader Zakir Musa defected from HM and founded the Al Qaeda-affiliated Ansar Ghazwat-ul-Hind (AGuH). In December 2018, youths stormed the separatist-affiliated Jamia Masjid in Srinagar and raised the IS flag there. Meanwhile, security forces continued to conduct cordon and search operations (CASO) against militant groups in several districts.

Fighting between the Myanmar military and the Arakan Army (AA) was ongoing across northern Rakhine state last week in Myanmar. Clashes between the Palaung State Liberation Front/Ta’ang National Liberation Army (PSLF/TNLA) and the Myanmar military were also recorded in Shan state; this is the second week straight of such reports. Notably, the military also fought with the Restoration Council of Shan State/Shan State Army-South (RCSS/SSA-S), a Nationwide Ceasefire Agreement (NCA) signatory, last week in Shan state; the last time the groups clashed was in February 2019. Despite the fighting, the military extended its unilateral ceasefire another two months; the ceasefire covers Kachin and Shan states but excludes Rakhine state (The Irrawaddy, 1 July 2019).

In the Philippines, in Sulu, there was a particularly deadly set of explosions which led to eight reported fatalities, including three civilians. Authorities suspect the Abu Sayyaf Group (ASG) may be behind the explosions given they are active in the area (ABS-CBN News, 28 June 2019).

In Indonesia, there were protests in Central Jakarta surrounding the verdict of the constitutional court over the disputed election results; the court ruled in favor of President Joko Widodo, who is now set to begin his second term (The New York Times, 27 June 2019). Widodo faces the challenge of growing divisions between conservative and moderate Muslims regarding their vision for the country (Asia Times, 27 June 2019); the ongoing separatist conflict in West Papua also is likely to pose a challenge in the coming years (for more on this, see ACLED’s recent infographic).

Civilians came under attack in the region last week — especially activists and minorities. An activist in Cambodia was severely beaten by an unidentified group; he had previously been an elected official with the Cambodia National Rescue Party (CNRP) before the party was banned in 2017 (Radio Free Asia, 28 June 2019).  As well, in Thailand, a pro-democracy activist was assaulted and seriously injured by unidentified assailants, marking the second time in a month he has been attacked (Front Line Defenders, 28 June 2019). Meanwhile, in India, a rise in mob lynchings and attacks on minority group members, especially Dalits and Muslims, has been reported across the country. The most high-profile incident was the lynching of a Muslim man accused of burglary by Hindu vigilantes in Jharkhand state.

With a heat wave roiling South Asia, demonstrations over water and power supply shortages and their management, as well as other environmental concerns, further intensified last week, especially in India. The extreme summer temperatures are a likely factor exacerbating an Acute Encephalitis Syndrome (AES) outbreak in the Indian state of Bihar which led to the reported deaths of over 180 children (Hindustan Times, 2 July 2019) and protests across the country.

In the latest move to clamp down on the drug trade in Asia, the Sri Lankan President signed the death warrants of four individuals convicted for drug-related offenses, officially reinstating capital punishment in Sri Lanka (BBC, 29 June 2019). In the Philippines, police raids led to the reported deaths of nine alleged drug suspects as President Duterte’s ‘War on Drugs’ continues. 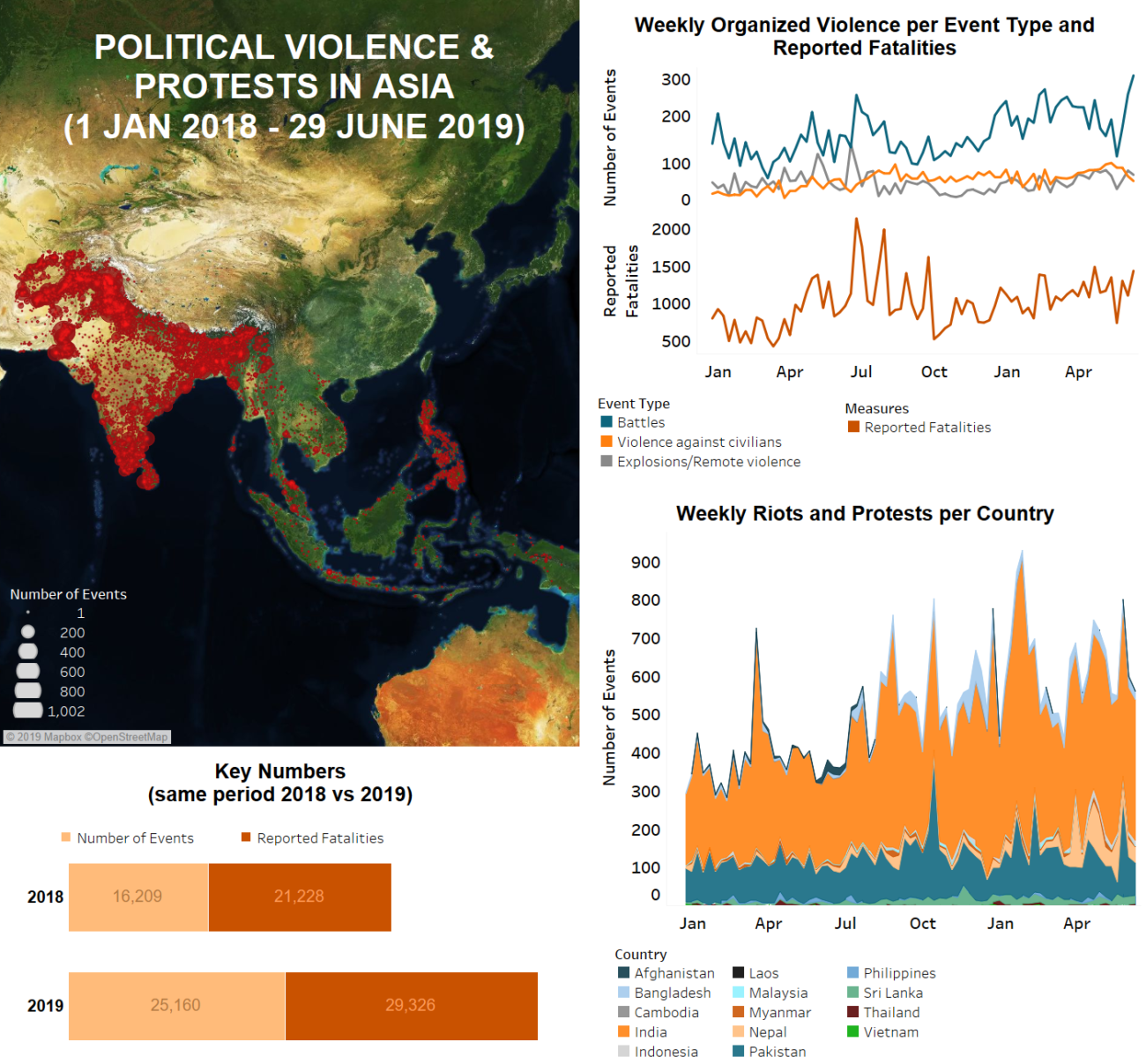