The key trends in South and Southeast Asia last week included: relatively high levels of political violence in Afghanistan as peace talks continued; protests in Thailand, Vietnam, Myanmar, and India in response to attacks against civilians; continued fighting between domestic rebel groups and state forces in Pakistan, India, Myanmar, and the Philippines; and a surge of pre-election violence in India’s Tripura state.

In Afghanistan, state forces and Taliban fighters continued offensive operations as a spike in organized violence continued for the third week. The Taliban seized Qush Tepa district in Jowzjan province from Afghan forces on 1 July; this was the site of frequent clashes between the Taliban and the Islamic State in 2017 and 2018. In northeastern Afghanistan, state forces reported on 6 July that they had gained control of Baharak district in Takhar province. While the district has no obvious strategic value, Afghan forces have engaged in concentrated military operations there since mid-June.

The warring parties also clashed in districts less prone to violence, such as Andkhoy in Faryab, Jawand in Badghis, and Saghar in Ghor. The extension of violence to these areas for the first time in months may be part of a push by the Taliban to put pressure on the Afghan government while the militant group continues to meet with the US in peace talks. Activities by Taliban militants, and especially those targeting state forces, are the driving force behind the increase in the number of events since mid-June.

The recent increase in fighting between the Taliban and Afghan forces contrasts with ongoing peace talks between the US and the Taliban in Qatar. The US envoy described the most recent round of discussions, which began on June 29, as the “best ever” due to the progress made on specific terms, such as US troop withdrawal (ABC News, 6 July 2019). Negotiators also announced an intra-Afghan dialogue to convene at the end of the week, although the Taliban continues to reject meeting with Afghan government officials (Al Jazeera, 1 July 2019). The Taliban emphasized its animosity towards the Afghan government with a suicide bombing of a Ministry of Defense building on 1 July with 40 reported fatalities, including 34 civilians.

In Pakistan, security forces stepped up Intelligence Based Operations (IBOs) throughout the country last week. Several militants belonging to Al Qaeda, Tehreek-i-Taliban, and Islamic State were killed and arrested during raids in Punjab, Sindh, and Balochistan provinces. Meanwhile, in Khyber Pakhtunkhwa, unidentified gunmen targeted leaders and activists of the Awami National Party (ANP). ANP members have been the targets of armed groups, especially the Taliban, for more than a decade with over 1,000 of its workers and leaders reportedly killed (Dawn, 30 June 2019). The secular-leaning ANP has previously supported military operations against extremist elements in the region, thus becoming a target for these violent groups.

In India, security forces continued to conduct cordon and search operations (CASO) in several districts of Jammu & Kashmir. Meanwhile, Naxal rebels continued to target civilians on suspicion of spying for the police.

Separatist violence in Thailand last week was concentrated in Yala and Pattani provinces and resulted in three reported deaths. In the Philippines, the New People’s Army and Philippine military clashed a number of times last week.

In Myanmar, the conflict between the Myanmar military and Arakan Army (AA) continued across northern Rakhine state and in Paletwa township in southern Chin state. Fighting was reported close to the Myanmar-Bangladesh border. Several leaders of the AA have been recently charged under a counter-terrorism law, marking the first time the law has been used to charge ethnic leaders (Radio Free Asia, 8 July 2019). The charges complicate efforts to hold peace talks between the military and the AA. Meanwhile, despite the extension of the military’s unilateral ceasefire covering Kachin and Shan states until the end of August, a clash was reported between the military and the Palaung State Liberation Front/Ta’ang National Liberation Army (PSLF/TNLA) in Shan state.

Incidents of inter-party clashes have significantly decreased across India in recent weeks following the 2019 general elections, with the exception of in West Bengal state where the political rivalry between the Trinamool Congress Party (TMC) and Bharatiya Janata Party (BJP) continues to cause wide-spread disorder. Meanwhile, in Tripura, with local elections scheduled for 27 July, there are reports of a surge in inter-party clashes and targeted attacks on party workers. Political infighting is especially fierce between the formerly allied Indigenous Peoples Front of Tripura (IPFT) and the BJP after the announcement that both parties will be contesting separately in the upcoming elections.

In other developments, in Thailand, Vietnam, Myanmar, and India, protests were sparked by violence committed against civilians. There were two protests in Thailand against the attacks that pro-democracy activists have endured in recent months (New York Times, 3 July 2019). In Vietnam, protesters demonstrated against the mistreatment of political prisoners in the country in solidarity with four political prisoners currently on hunger strike in a jail in Nghe An province (UCA News, 2 July 2019). As well, in Myanmar, Rakhine youth gathered in Sittwe for a protest and performance, calling for justice in the recent deaths of several Rakhine villagers while in military custody. Also in Myanmar, thousands protested in Yangon demanding “Justice for Victoria” after a two-year-old girl was raped while in a nursery.

Finally, in India, the recent surge of vigilante violence continued last week. Many of these attacks target members of the Muslim community who are assaulted and forced to shout “Jai Shri Ram” (Hail Lord Ram), a slogan used by far-right Hindu nationalist groups. Meanwhile, people across the country – especially Muslims – took to the streets to protest mob justice and demand stringent legislation to curb public lynchings. 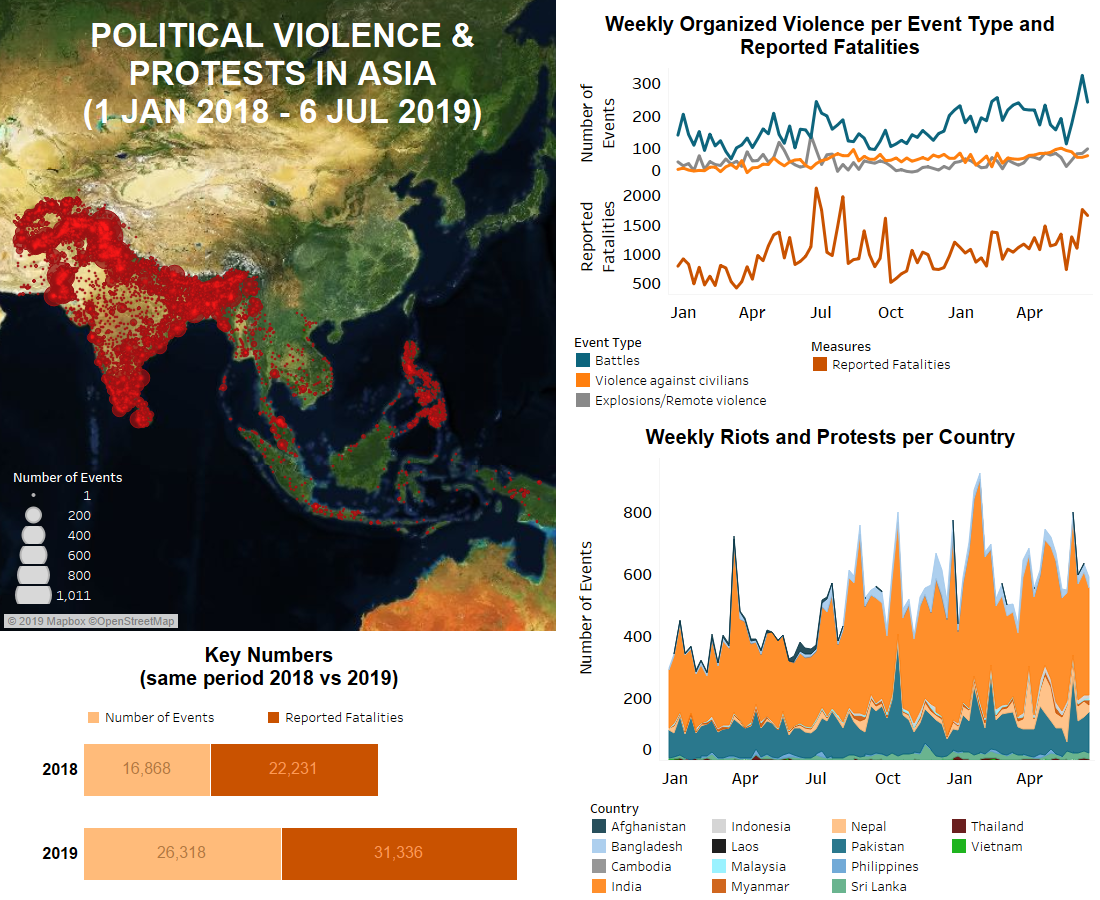