The key trends in Asia this week include: a decrease in organized violence and fatalities in Afghanistan; fighting between state forces and domestic armed groups in Pakistan, Thailand and Myanmar; election violence in India and Pakistan; increasing communal tensions in India and Sri Lanka; and attacks on civilians in Vietnam and the Philippines.

In Afghanistan, the Taliban pushed forward with its Al Fath offensive campaign. While the number of violent events remained relatively high for a fourth consecutive week, last week signified a downturn in the levels of organized violence. Reported fatalities decreased by about one-third compared to the previous week largely due to a decrease in reported clashes between the Taliban and Afghan forces. This decrease could signal that Taliban and Afghan forces were unable or unwilling to sustain the high levels of activity they achieved over the previous month. Meanwhile, the Taliban reported territorial gains in five different provinces, including the northern areas of Baghlan, Balkh, Jowzjan, and Kunduz. Large populations of different ethnic groups, including Tajiks and Uzbeks who have historically been opposed to the Pashtun-led Taliban, live in these provinces (Foreign Policy, 16 June 2015). The ability to control land or mobilize populations beyond its historic Pashtun strongholds would bolster the Taliban’s ability to challenge the central government.

In Jowzjan province, Taliban fighters attacked the convoy of Vice President Abdul Rashid Dostum without inflicting any reported casualties. Besides being vice president, Dostum has gained infamy in Afghan politics over decades and commands the support of many of his fellow Uzbeks through the Junbish-i-Milli Islami (JMI) party. Both the Islamic State (IS) and the Taliban have made attempts on his life in the previous year (NPR, 1 April 2019). Given the ongoing peace talks between foreign countries and the Taliban without the participation of Afghan officials, the attack against Dostum may have been a way for the Taliban to gain an upper hand prior to negotiations or to derail the government in advance of the presidential election scheduled for September.

The week ended on Saturday with the death of an American soldier in combat in Faryab province, presumably during clashes with Taliban fighters. This is the third American combat fatality in Afghanistan in the last three weeks and the tenth in 2019 (ABC News, 14 July 2019). During the same time period in 2018, four American soldiers were killed. A relatively high rate of American casualties may affect the stance of the United States in ongoing peace negotiations with the Taliban.

In Pakistan, domestic armed groups continue to be active, in particular in the restive district of North Waziristan in Khyber Pakhtunkhwa province. Meanwhile in India, for the first time since January of this year, no clashes were reported between state forces and militants in Jammu & Kashmir state. Meanwhile, state forces launched security operations against Maoist rebels after receiving information on rebel encampments. Increased Maoist activity – both clashes with security forces and attacks against civilians – was reported from several states in central and southern India, including Jharkhand, Chhattisgarh, Maharashtra, Madhya Pradesh, and Telangana.

Reported fatalities from separatist violence in Thailand increased last week. Two members of the Volunteer Defense Corps were killed in clashes with suspected separatists in Yala province, while two civilians were killed by suspected separatists in Pattani province. The clashes come as Prayuth Chan-ocha resigned as head of the military government with the new government expected to be sworn in this week with Prayuth Chan-ocha as Prime Minister (Reuters, 15 July 2019).

As the internet blackout in northern Rakhine and southern Chin states continues, the Myanmar military and the Arakan Army (AA) clashed in Kyauktaw township in Rakhine state in Myanmar last week. Notably, several Rakhine men who were based in Singapore were deported back to Myanmar where they were arrested for allegedly raising funds for the AA — charges which the men deny (The Irrawaddy, 10 July 2019). As well, despite the unilateral ceasefire declared by the military covering Kachin and Shan states the Myanmar military and Palaung State Liberation Front/Ta’ang National Liberation Army (PSLF/TNLA) reportedly clashed twice in Namtu township in Shan state.

Elections continued to fuel disorder in South Asia. Violence was reported in Pakistan as campaigning for the upcoming provincial assembly elections, scheduled for 20 July, gained momentum in the tribal districts of Khyber Pakhtunkhwa. In India, accusations of violence and candidate intimidation were leveled against the ruling Bharatiya Janata Party (BJP) in connection with the local elections held in Tripura on 11 July.

Past and upcoming elections have an impact on the revitalization of identity politics in the region. In India, a significant increase in attacks against minority groups, especially Muslims and Dalits, has been reported since May 2019 when the Hindu nationalist BJP won a resounding victory in the general elections. Meanwhile in Sri Lanka, with the presidential elections being scheduled for later this year, the Buddhist nationalist group Bodu Bala Sena (BBS) started rallying its hardline supporters to campaign for Sinhalese Buddhist candidates. Sectarian tensions have been high in the island nation since Islamist suicide bombers attacked churches and hotels on Easter Sunday this year (Reuters, 7 July 2019).

In the Philippines, in Soccsksargen region, a radio journalist was killed by unidentified assailants. As well, an activist associated with the human rights group Karapatan was killed by unidentified assailants in the Central Visayas region. Further, a Lumad chieftain was reportedly killed in Northern Mindanao by a militiaman. Finally, 14 fatalities were recorded from police raids of alleged drug suspects. Violence against civilians thus remains a weekly issue in the Philippines (for more on this, see this recent ACLED press release). 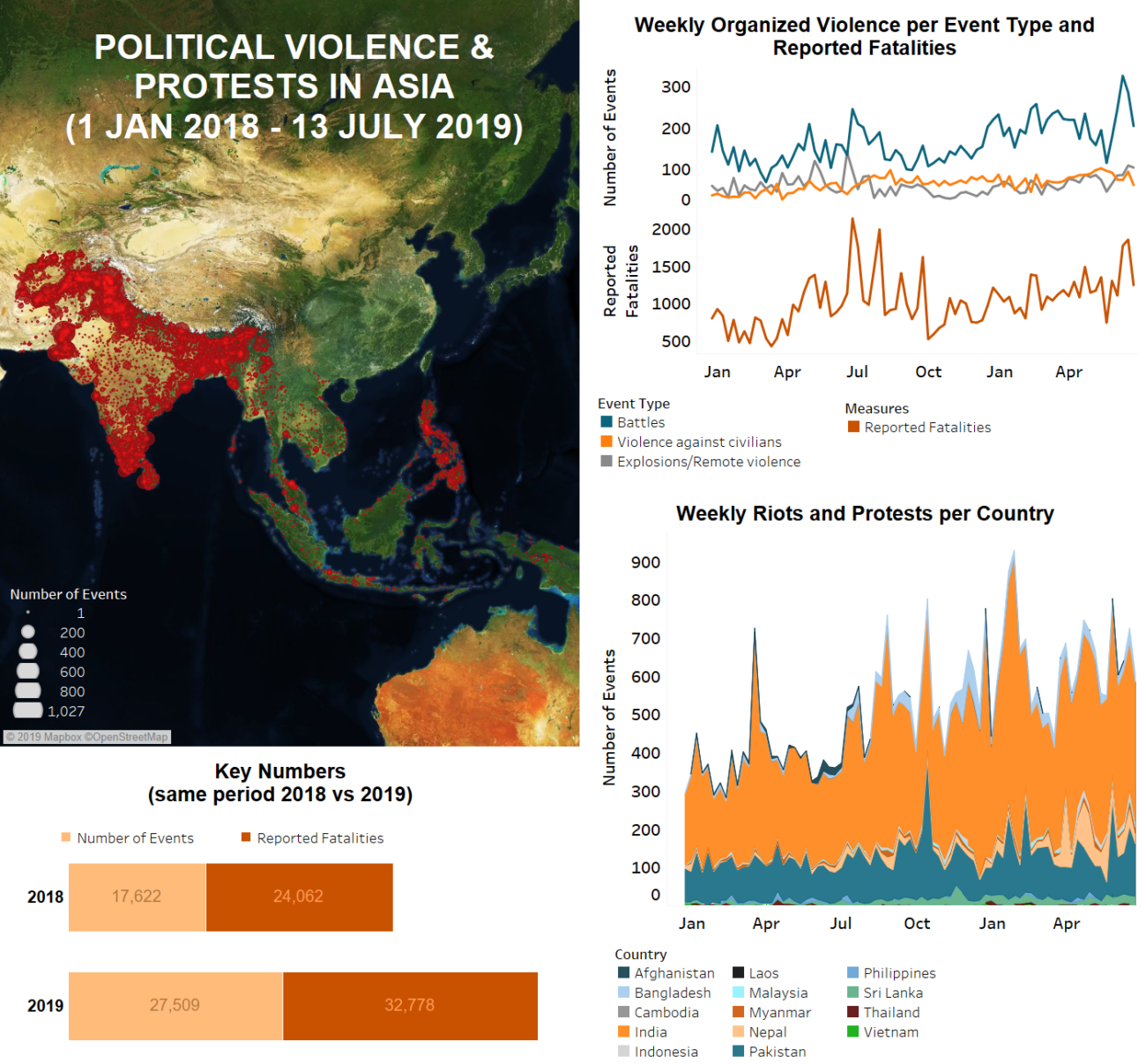