The key trends in Asia last week included: challenges against the Afghan government by the Taliban in strategic districts and cities; fighting between state forces and domestic armed groups in Pakistan, India, Thailand, Indonesia, the Philippines and Myanmar; election violence in India and Pakistan; and communal violence and tensions in Indonesia, Malaysia, India, and Sri Lanka.

In Afghanistan, intense fighting continued between the Taliban and government forces. The Taliban claimed to overtake 41 security posts in Qalat and Shah Joy districts of southern Zabul province. The critical highway connecting the nation’s capital, Kabul, and the former capital of the Taliban, Kandahar, runs through these districts. Controlling checkpoints and land in these areas will facilitate the movement of people and resources for the Taliban as they continue to contest the central government. Taliban fighters also staged attacks in some of Afghanistan’s major cities, including suicide bombings in Kandahar and Kabul, following a recent claim by the group’s spokesman that they are targeting cities more often as retaliation for the government’s violence against civilians (New York Times, 19 July 2019).

Additionally, Taliban infiltrators opened fire on local policemen, Afghan soldiers, and/or American soldiers last week as well. These are only the tenth and eleventh times such attacks have been reported in 2019. The militants’ ability to infiltrate and target states forces from within remains a vulnerability for the military and police as they continue their efforts to stabilize the country and rout out different armed groups. These events may be indicative of additional pressure on Afghanistan’s armed services, who already struggle in the face of low salaries and high fatality rates, with estimates of around two dozen servicemen deaths each day (New York Times, 6 June 2018; BBC, 25 January 2019).

In Pakistan, reports of violence perpetrated by domestic armed groups subsided last week, amidst a crackdown by security forces on proscribed groups — and in particular on groups suspected of financing militant activities. In Punjab province, security forces arrested Hafiz Saeed, the leader of Jamaat-ud-Dawa (JuD) – a front group of the banned militant outfit Lashkar-e-Taiba (LeT). This move is seen as an effort to meet the October deadline set by international financial watchdog Financial Action Task Force (FATF) to improve Pakistan’s efforts against terror financing (Express Tribune, 17 July 2019). Meanwhile, in India, organised violence picked up again in Jammu & Kashmir state last week following a lull in the number of reported events the week prior.

Two separate explosions set-off by suspected separatists injured seven Thai rangers in Narathiwat province in Thailand, a decline in separatist violence from the previous week. In the first clash recorded since May this year, a military officer was killed in Indonesia during fighting between the West Papua National Liberation Army (TPNPB) and Indonesian military in Papua province. In the Philippines, state forces clashed with Abu Sayyaf and the New People’s Army (NPA) last week. Fighting between state forces and the NPA was particularly deadly with nine fatalities stemming from the clashes.

While reports of fatalities from drug-related violence decreased in the Philippines last week, a protest against the ongoing ‘War on Drugs’ was held in Laguna province. The protest came before President Duterte’s State of the Nation speech and was meant to highlight government policies that have adversely affected the poor (Bulatlat, 19 July 2019).

In Myanmar, deadly fighting continued between the Myanmar military and Arakan Army (AA) across northern Rakhine state and southern Chin state. As the 2020 elections approach, a number of rallies encouraged by the National League for Democracy (NLD) were held supporting amendments to the 2008 military-drafted constitution; opposing rallies against such amendments were also held by nationalist and military-backed groups. As well, notably, students protested on the campus of Yangon University during the visit of State Councilor Daw Aung San Suu Kyi, calling for the release of students detained for participating in a march on the anniversary of the July 7, 1962 student protests and the subsequent crackdown.

Elections continue to lead to political violence in South Asia. In Pakistan, as during previous elections, the use of violence and intimidation tactics against Provincial Assembly elections candidates has been reported in Khyber Pakhtunkhwa province. Allegations were labelled against candidates of the ruling Pakistan Tehreek-i- Insaf (PTI) for targeting rival candidates — and in particular those fielded by the Awami National Party (ANP). In India, a fresh wave of violence between supporters of the Bharatiya Janata Party (BJP) and Trinamool Congress Party (TMC) was reported in West Bengal state. The state has been the sight of continuously high levels of political violence since the general elections in April and May earlier this year.

Meanwhile, communal violence fueled by resource conflicts as well as identity politics continues to be reported across India. In Sri Lanka, communal tensions between the Tamil and Sinhalese community heightened last week following the destruction of a Hindu temple at Kanniya town in Trincomalee to make way for a Buddhist vihara (temple or monastery). Protests by hundreds of Tamils were met with police force as well as violence by Sinhalese traders. A land dispute led to a deadly clash between two communal groups in Indonesia; four farmers were reportedly killed. In Malaysia, land issues also led to a clash between several Temiar Orang Asli people who had established a blockade in Perak state to prevent logging in the area and police who destroyed the blockade. 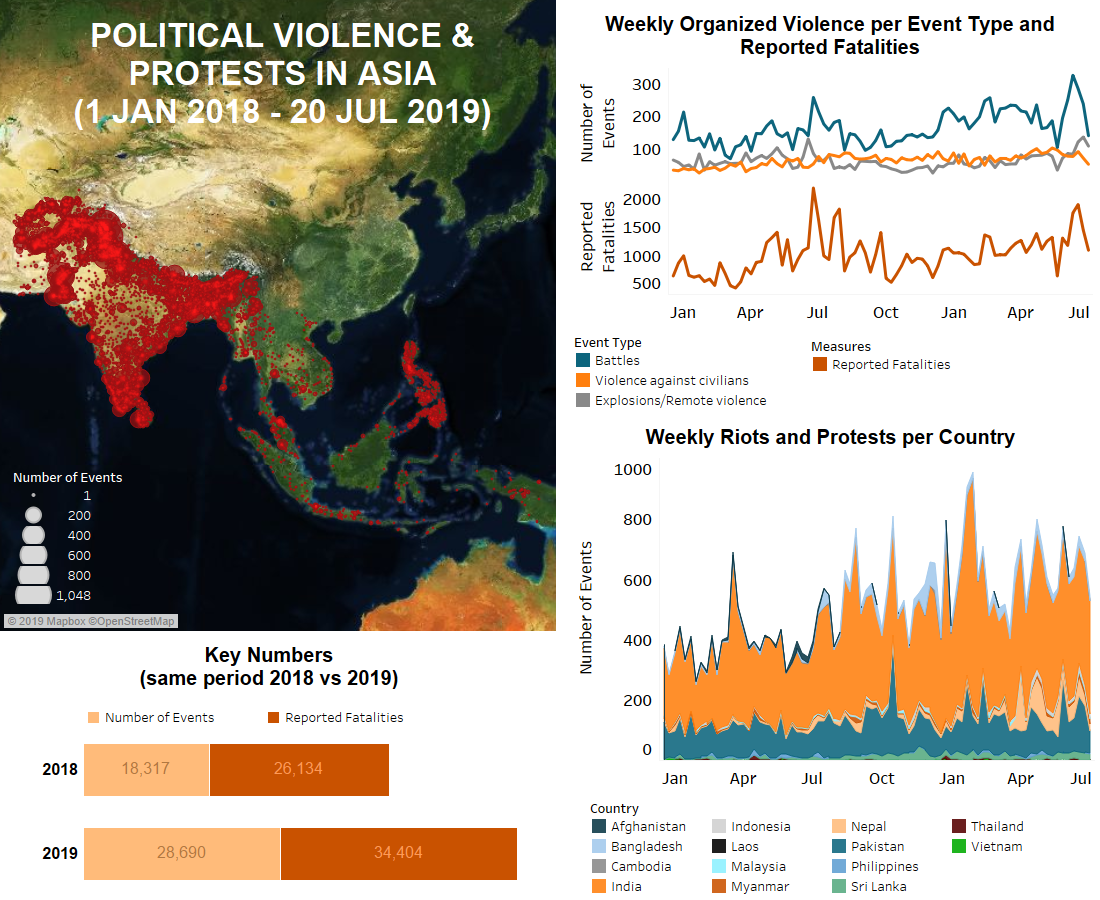