On 3 May 2019, Syrian regime forces launched a ground offensive in the opposition-held greater Idleb area. The campaign, backed by the Russian Air Force and various pro-regime militias, focuses on parts of Hama, Idleb, Aleppo, and Lattakia. The multi-pronged offensive was designed to overwhelm opposition forces to consolidate the regime’s territorial gains: these gains would provide strategic protection to its existing territory and prove politically advantageous in ongoing international talks. While the first two weeks of the Idleb offensive largely went according to plan, rebels were ultimately able to limit regime gains and even counterattack. Rebels’ newfound willingness to join forces against the regime, as well as shifting foreign force involvement in the conflict, served to reduce the impact of the regime’s offensive.

The regime’s strategy was simple: utilize extensive airstrikes in support of ground forces in order to achieve swift territorial advances and ultimately secure its current territory in the area. Spread across Lattakia and Hama and within the range of indirect fire, existing regime and Russian military airbases and camps have been prone to attacks by the various Islamist and rebel groups in recent years. With the broader objective of leveraging territorial gains during international talks, the regime and its allies vehemently advanced, seizing control of over nine major towns and villages in northern Hama and southern Idleb during the first week of the offensive (see map below). While rebels on the Lattakia front resisted the continuous onslaught, more locations in Hama and Idleb fell to the regime in the second week. It was only during the third week that the regime’s push was hindered by several rebel counter-attacks. Throughout the following weeks, rebels succeeded in gaining territory themselves. The second half of June and the month of July were characterized by a military stalemate: tit-for-tat attacks, interrupted by a rebel assault on the strategic Hamamiyat village on 10 July. Rebels briefly took over the town, though the regime recaptured it after about 24 hours, hundreds of airstrikes, and numerous casualties. 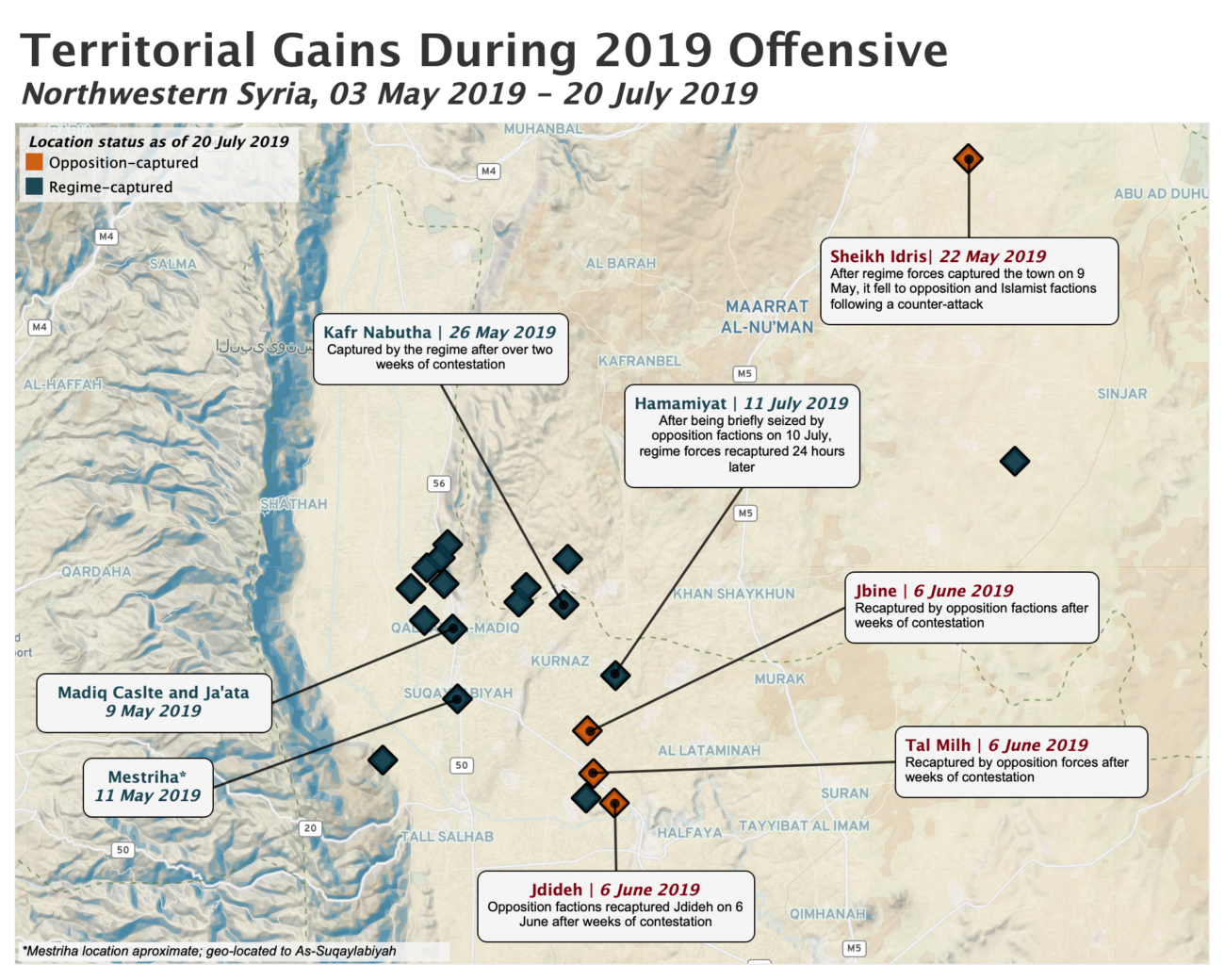 Contrary to the previous major regime offensive in northwest Syria, this offensive was met by vigorous and successful resistance shown by opposition groups. These successful defensive and counter-offensive measures can be attributed to the high level of coordination among rebel and Islamist factions during this campaign, which include Hayat Tahrir al Sham (HTS), the National Liberation Front (JTW), Jaysh al Izza, and Ansar al Tawhid, among others. Having established the al Fath al Mubeen Operations Room, the historically-opposing groups were able to look past their differences and in fact cooperate in their efforts to defend the ever-shrinking rebel enclave in northwest Syria. The success of this coordination was particularly impactful in the groups’ takeover of Hamamiyat, which provides a line of sight over Karnaz – a major regime stronghold – and the supply lines around it. While brief, the takeover almost certainly had a major effect on both sides’ morale: Hamamiyat had never before been controlled by an anti-regime force.

Previous failure to coordinate has severely limited opposition groups’ ability to prevent regime advances. In late 2017 and early 2018 – during the regime assault at the Aleppo, Idleb, and Hama junction known as ‘east of the railway’ – rebels and Islamist factions were not only fighting on two fronts against outsiders – the regime and the Islamic State (IS) – but also competing amongst themselves for terrain within their areas of control. This infighting significantly hampered rebels’ ability to withstand such large-scale assaults by the regime and IS. During this offensive – which lasted nearly five months – ACLED recorded 980 battle events involving regime forces and their allied militias against opposition forces (including HTS) or IS; meanwhile, simultaneously, there were 144 events between various opposition factions, or between opposition groups and IS. Since the beginning of the current campaign in Idleb, 246 battles have been recorded between the regime and opposition forces, while no opposition infighting events have taken place to date (see chart below). 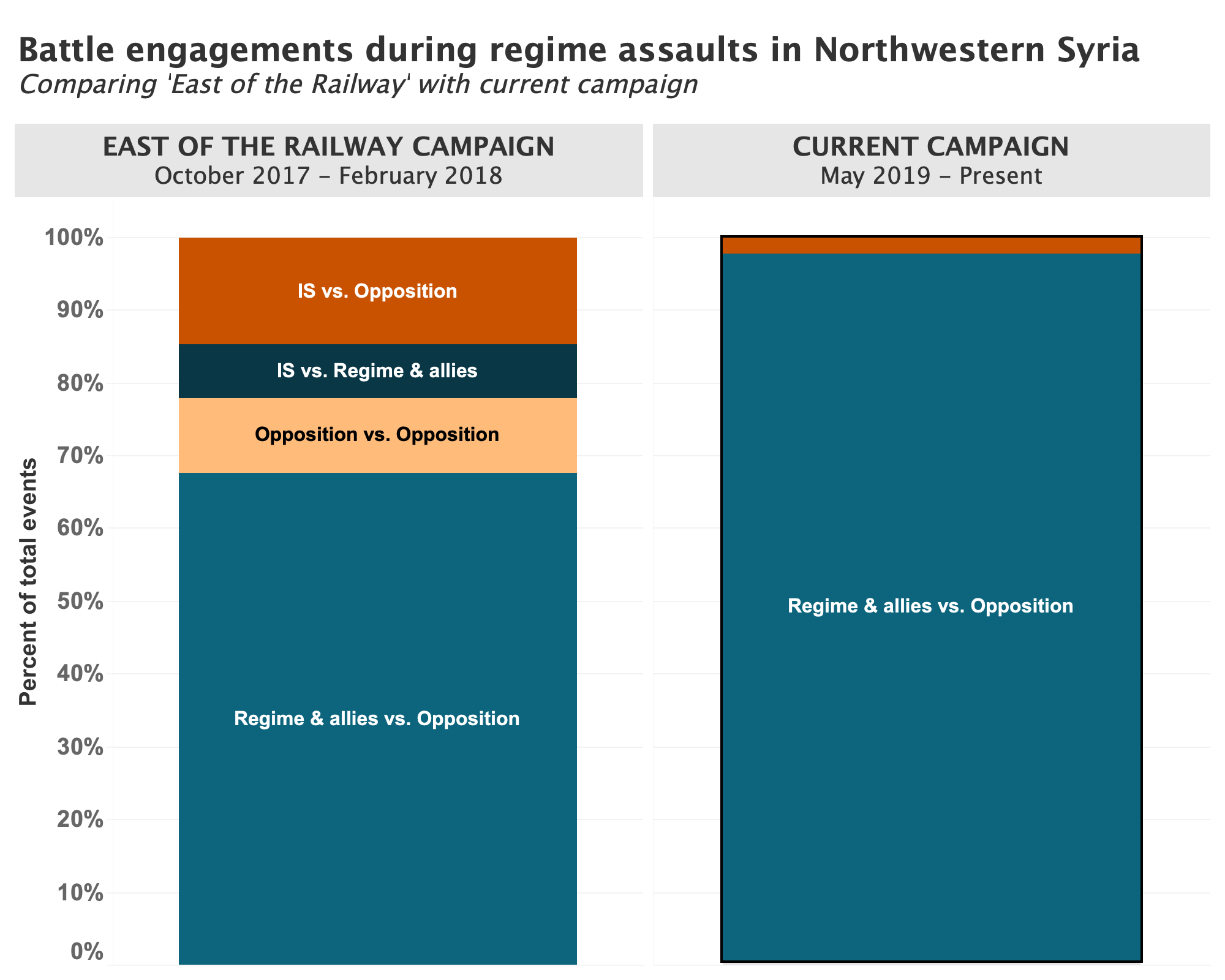 There are other differences between the regime’s current offensive and its previous ‘east of the railway’ assault which contribute to its relative lack of success. Out of the nearly 1,000 events during the ‘east of the railway’ assault, 26 involved support for the regime from pro-Iran and pro-Russia militias, including Hezbollah, the Islamic Revolutionary Guard Corps (IRGC), the Quds Brigade, and Liwa al Safira. In contrast, none of the recorded events during the current campaign have involved foreign militia support, which offers further explanation for the regime’s inability to overcome the current stalemate. A general drawdown of foreign-supported militias is in part responsible for this development: notably, Hezbollah’s Secretary-General Hassan Nasrallah stated on 12 July that the Lebanese militia has already begun reducing its forces in Syria (Reuters, 12 July 2019). Similarly, Iran has implied that without its ground units, the regime cannot overtake and defend territory (The Moscow Times, 20 June 2019), and has largely declined to operate in Northwest Syria, where its strategic interests are minimal. Meanwhile, Turkey’s increasingly central role in northwest Syria has also impacted the course of the campaign. In addition to the increasing presence and fortification of Turkish observation points in the greater Idleb area, the support Turkey likely continues to provide a number of rebel groups has proven vital in the current fight against the regime. For instance, ACLED recorded a two-fold increase in rebel use of anti-tank guided missiles (ATGMs) during the current assault from the ‘east of the railway’ campaign: 55 instances of ATGM use have been reported so far during this assault, while only 27 instances occurred during the ‘east of the railway’ campaign.

The regime’s marked success decreased when foreign militias failed to show for battle – a reality which potentially portends a shift in its fortunes should friendly regional actors continue to step back. This Achilles heel, combined with newfound willingness to cooperate between opposition groups, could mean that the regime’s steady stream of territorial gain will be stifled. These developments do not only potentially impact the course of the war, but have real implications for civilians on the ground: the regime and Russian campaign has led to the targeting of civilians and civilian infrastructure, including hospitals, relief organizations, bakeries, and water facilities. Predictably, increased violence in northwest Syria has also led to a new wave of displacement towards the Syrian-Turkish border. As of the end of July, the regime and Russian aerial campaign continues to devastate civilian life in northwest Syria, as ground forces fail to advance, while opposition and Islamist factions continue to utilize hit-and-run tactics to inflict damage to regime positions along the frontline. This devastation will likely only continue as the regime struggles to force its way through Idleb.

Muaz Al Abdullah is a Middle East Research Manager at ACLED overseeing Syria, Iraq, and Iran. He has been with the organization since June 2017. Muaz holds an MA in Political Science and International Relations and has over eight years of experience working with different non-profit organizations and providing security analysis to organizations implementing projects in Syria. His research focuses on reconstruction efforts in the transitional/post-war phase in Syria.