In the Middle East last week, there were a number of developments with on-going conflicts in Syria and Yemen. Other events that are likely to influence regional dynamics include the Turkish crackdown on migrants, executions in Bahrain, and home demolitions in Palestine.

In Syria, Israel carried out airstrikes against regime and Hezbollah positions in Quneitra province on 23 July, resulting in nine reported fatalities among regime and militia forces. Elsewhere, five IEDs planted by unidentified attackers struck Turkey-backed rebel-held areas in Aleppo governorate, resulting in reported civilian fatalities. Clashes continued in the Greater Idleb area between the regime and allied militia forces against the rebels and Islamist factions, albeit at a lower rate than those recorded during the previous week. However, the regime and Russian aerial campaign in northwestern Syria escalated with 20% more attacks than the prior week, resulting in over 130 reported civilian fatalities, including IDPs, aid workers, and health workers.

Short clashes, assassinations, protests, and kidnappings were reported in Aden city last week as unrest in the city continues to build. The city, located in the far south of the country, is serving as the country’s interim capital and has hosted the internationally-recognized government of Yemen since the Houthi takeover of Sanaa.

In Turkey, anti-refugee sentiment is reportedly at an all-time high as the government initiates a crackdown on unregistered migrants (InfoMigrants, 29 July 2019).  The governor of Istanbul set a four-week deadline for Syrians without Istanbul permits to return to the areas where they are registered (Reuters, 25 July 2019). Over the last two weeks, over 6,000 migrants have been arrested. These arrests primarily affect Syrian and Afghan migrants. Syria TV reported that over 4,000 Syrians have been deported from Turkey since the beginning of the month (Al Jazeera, 29 July 2019). As Turkey hosts the most refugees internationally, this change in policy will significantly affect the refugees it currently hosts and is likely to also impact regional dynamics around migration.

Furthermore, on 27 July, two Shiite activists were executed in Bahrain despite the last-minute appeal by UN officials to halt the executions (The Guardian, 26 July 2019). The two were sentenced to death on terrorism-related charges in a mass trial amidst allegations of torture and due process violations. Over the last week, there was an increase in reported demonstration events as anger mounted against the executions. On Saturday, activists reported that a protester was killed by teargas inhalation after security forces intervened in a demonstration event in Bilad al-Qadeem, though government officials claim the man died of “natural causes” (Reuters, 29 July 2019). Protest activity is likely to continue in the coming weeks in the aftermath of the executions and the demonstrator’s death. Most of the anger is directed at the Sunni royal family, which dominates key government institutions like the judiciary, and the King, who ultimately ratifies all death sentences (Human Rights Watch, 26 July 2019).

Finally, in Palestine, Israeli forces demolished 12 Palestinian homes in Sur Baher; this is the largest demolition operation in recent years (Times of Israel, 23 July 2019). The home demolitions have increased tensions between the Palestinian Authority (PA) and the Israeli government, with a PA official stating that the security cooperation with Israel has reached its lowest level and that the PA has begun a process of disengaging from Israel (Xinhua, 29 July 2019). Diplomatic deterioration and escalating tensions on the ground are likely to result in increased clashes, particularly in East Jerusalem. 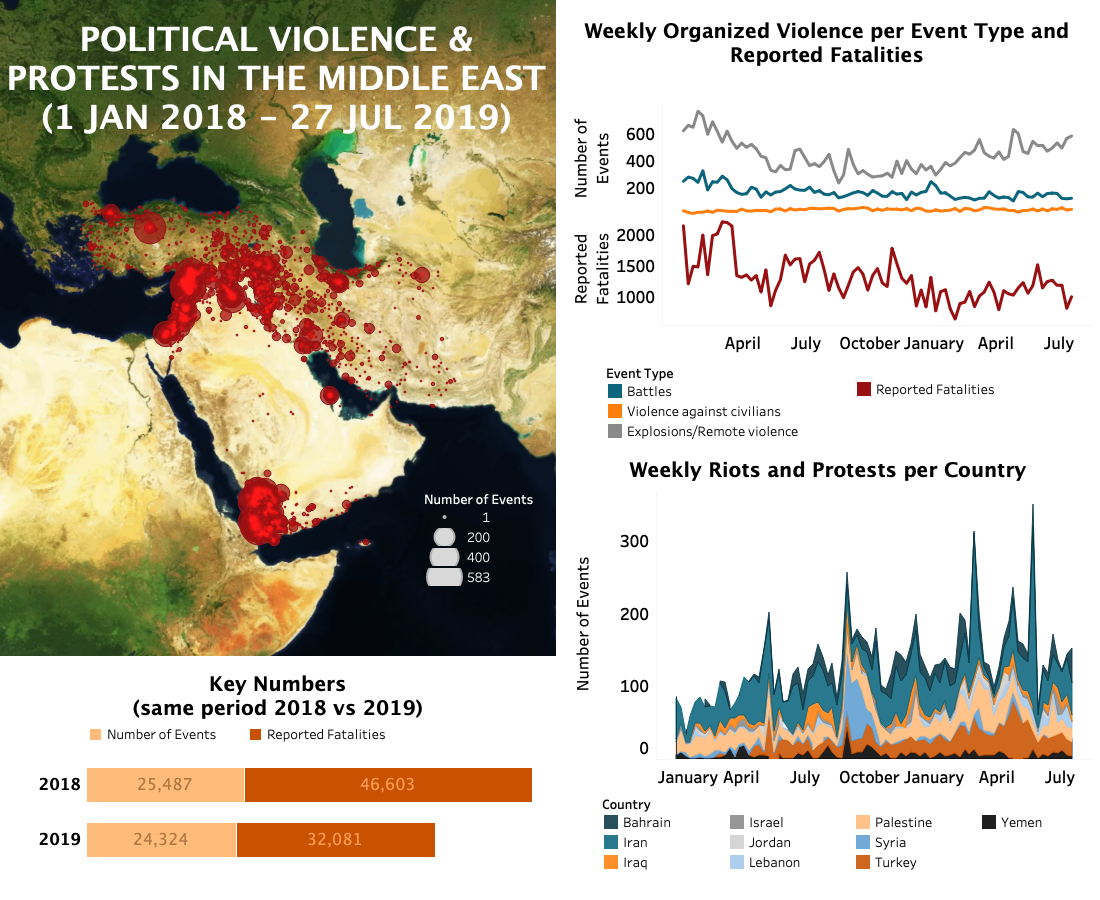 Lauren Blaxter is a Middle East Research Manager at ACLED. She has been responsible for coding Israel, Palestine, Lebanon and Jordan since May 2017. Lauren holds a BA in Human Rights, a Graduate Diploma in Law, and a LLM in International Criminal Law. Her work focuses on law and forensics in armed conflict.
31 July 2019
Share
TweetShare on Twitter Share on FacebookShare on Facebook Share on LinkedInShare on LinkedIn