Last week in the Middle East, battles continued in Yemen between pro-Hadi and pro-Houthi forces, as well as with separatist movements backed by the United Arab Emirates (UAE) in the south. While clashes in Syria fell following the ceasefire declaration, Islamic State (IS) attacks rose in Iraq. Projectiles were fired at both Israel’s northern and southern borders and Israeli forces responded by targeting 50 positions in Lebanon and multiple positions in Gaza. Notable political developments occurred in Israel and Iran, the two countries in the region most embroiled in the US-Iran standoff.

Last week in Yemen, pro-Hadi and pro-Houthi forces continued shelling in al-Hudaydah and Sadah governorates. Heavy clashes in the Harad area in Hajjah and al-Jawf governorates, as well as in Taizz, were also reported. Pro-Hadi forces advanced to the outskirts of Harad city. Regaining Harad would signify a major strategic win for pro-Hadi forces. In the south, one of the most prominent attacks was claimed by forces loyal to the separatist Southern Transitional Council (STC) who ambushed pro-Hadi forces in al-Nuqbah area while UAE raids were also allegedly carried out. This is indicative of an escalation of tensions between Saudi Arabia and the UAE in Yemen, particularly considering the importance of the separatists’ movement backed by the latter.

Thousands of Yemenis took to the streets in Aden, Mukalla, and Hadibu, to show support for the UAE, and de facto support for the STC. This comes in conjunction with Saudi calls on the STC to cede control of Aden, indicating a deepening rift between the UAE and Saudi Arabia, which could be a detrimental factor for any future peace in Yemen. Similarly, talks organized by Saudi Arabia between the STC and the Yemeni Hadi government stalled in Jeddah. If the talks are not able to achieve a political solution, fighting in the south is expected to rise significantly (Xinhua, 7 September 2019).

In Syria, on 30 August, Russia announced a unilateral ceasefire following the large territorial gains of the regime in the Greater Idleb area. As the ceasefire went into effect on 31 August, violence between the regime, loyalist militias, Russian forces, rebels, and Islamist fighters fell dramatically. While there were sporadic clashes and artillery fire from regime forces, the ceasefire largely held throughout the first week of September. Residents of northern Idleb towns demonstrated on Friday against the regime and Russian offensive and against perceived Turkish inaction. Since the beginning of the operation to retake the Greater Idleb areas from rebels and Islamist militants in April, more than half a million civilians have been displaced and over 500 people have been reportedly killed (Al Jazeera, 30 August 2019).

Meanwhile, IS attacks increased in Iraq last week as the country prepared for Shiite Ashura and Husseiniyah week. IS is also thought to be behind the attacks in Baghdad, but have yet to claim them. The rise in IS attacks is particularly notable in areas of Iraq where there is a security vacuum due to territorial disputes between the Kurdish regional government and the Iraqi federal government, such as Kirkuk governorate. Officials and civilians have called for a joint security plan between Iraqi security forces and the Peshmerga, but no solid action to fill security gaps has occurred (Kurdistan24, 7 August 2019). Unless these security issues are resolved, Kurdish areas will remain particularly vulnerable to IS attacks.

Israel was attacked by three missiles from Hezbollah in Lebanon early last week but did not result in any casualties according to Israeli media. Hezbollah supporters took to the streets in celebration and support of the attack while Israeli forces retaliated by targeting 50 positions near the border. Toward the end of the week, tensions on the Gaza-Israel border also increased following fatalities at the Return March on Friday. The Return March began over a year ago and the demonstrations are frequently met with heavy live-fire from Israeli forces. Last week, two young Palestinians, ages 14 and 17, were reportedly killed by Israeli live fire at the demonstrations (Haaretz, 7 September 2019). After the demonstrations, five rockets were fired from Gaza into Israel and Israeli forces responded by targeting several resistance positions across Gaza. On Saturday, a drone flew from Gaza into Israeli territory and released what appeared to be an explosive device that damaged a military Humvee. Following the alleged drone attack, more Israeli airstrikes were reported in Gaza.

In Iran, an Iranian spokesperson announced that Iran has begun to use more advanced centrifuges to increase its stockpile of enriched uranium. The move increases pressure on European nations to salvage the 2015 nuclear agreement. The Iranian spokesperson said, “The European parties to the deal should know that there is not much time left, and if there is some action to be taken [to rescue the nuclear agreement], it should be done quickly.” (The Guardian, 7 September 2019). 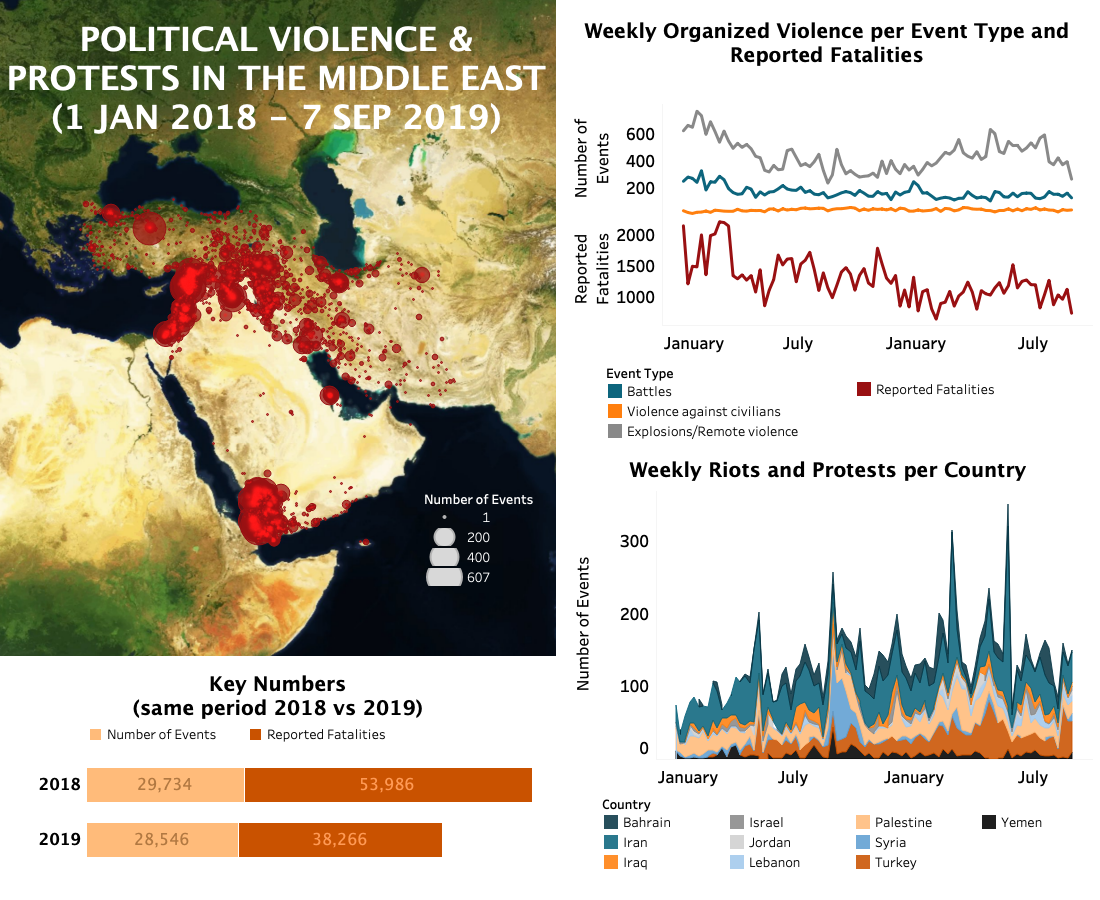