During the past week, Africa’s notable violence occurred in several typical hotspots:  Al Shabaab attacks targeted government officials in Somalia; intensified battles between Khalifa Haftar’s Libyan National Army (LNA) and the Government of National Accord (GNA) continued in Libya; violence targeting civilians in the Democratic Republic of Congo and Burkina Faso was significant, and many violent demonstrations occurred in Nigeria around Ashura.

In Somalia, Al Shabaab concentrated attacks on government convoys in Middle and Lower Shabelle, Geo and Bay regions. On September 14, at least five former Hirshabelle administrators were killed in an explosion by Al Shabaab militants in Balcad.  The group claimed to kill three district officials a day before in Belet Xaawo, Gedo, and planted a landmine in Diinsoor, Bay region (aimed to harm a district commissioner) and killed four people.

Moreover, on September 14, the convoy of the Somali Prime Minister was hit by an improvised explosive outside his office in Marka town in Lower Shabelle. Although the attacking group remained unclear and no casualties were reported, such incidents led security forces to launch a sizeable operation in Middle Shabelle, arresting dozens of suspects, including approximately 50 clan leaders considered to be ‘in collaboration’ with Al Shabaab.

Meanwhile, battles continue in Libya between Khalifa Haftar’s Libyan National Army (LNA) and the Government of National Accord (GNA). Both parties targeted each other with airstrikes in western Libya’s Tripoli and Aljfara districts, and intense clashes were also reported in Al Jabal Al Gharbi. On September 14, a battle between LNA and GNA forces resulted in dozens of reported GNA fatalities across Tripoli.

In Nigeria, a jump in protests and riots last week coincided with the annual religious rite called Ashura, a major religious commemoration of the martyrdom of Hussein, a grandson of the Prophet Muhammad.  These demonstrations were led by the Islamic Movement and turned highly violent in Katsina, Kaduna, Gombe and Bauchi states. The clashes with intervening police forces resulted with at least several reported fatalities from the demonstrators.

Meanwhile, in Burkina Faso, the  Group for the Support of Islam and Muslims and Islamic State (JNIM) attacked villages in Centre-Nord region, raiding livestock and causing casualties and property destruction. One of the most significant attacks took place on September 8, when suspected JNIM militants targeted a group transporting supplies for internally displaced, and killed fourteen people in Centre-Nord. On the same day, near Guienbile town of the same region, an IED attack by JNIM caused fifteen civilian deaths. JNIM also clashed with security forces and a local Koglweogo Militia in the Centre-Nord and Sahel regions; these led to many fatalities. On September 13, amid security concerns, police forces withdrew from Djibo town in Sahel region.

In Algeria, the anti-regime demonstrations took place all over the country for the 30th consecutive week while in Egypt, military operations against IS in North Sinai continued with reported fatalities from both sides. 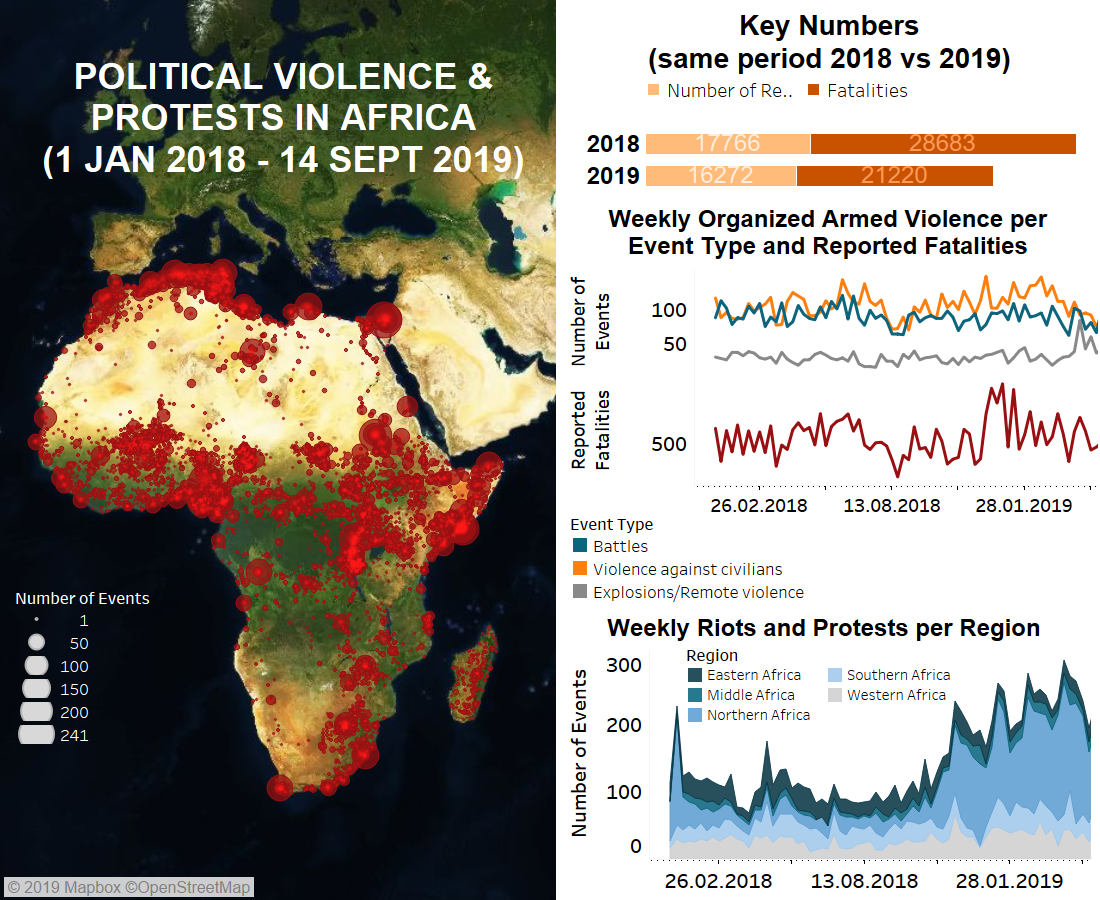