The key trends in South and Southeast Asia last week include: significant Taliban incursions in northern Afghanistan; the ongoing security crackdown in Kashmir; border tensions between India and China; and continued clashes in Shan and Rakhine states in Myanmar.

In Afghanistan, following two of the deadliest weeks in the conflict this year, reported fatalities dropped significantly compared to the previous week. While there were fewer events of politically motivated violence overall, there was also a larger proportion of events with zero reported fatalities. This is common with failed attacks or when a source is unable to provide information on  casualties from an attack, which is common among the Taliban’s claims.

Meanwhile, the Taliban reported significant territorial gains across five of the country’s northern provinces: Baghlan, Balkh, Kunduz, Takhar, and Samangan. In Samangan, the Taliban reportedly captured a large area near the provincial capital and further claimed to have gained control of a military base in a large district to the southwest of the provincial capital in Balkh. In Takhar, the group claimed to have fully seized three districts in the northwestern portion of the province along the Tajik-Afghan border. These areas are inhabited largely by non-Pashtuns, including Tajik and Hazara populations, and have previously served as sites of resistance against the militant group. However, some analysts point to gains like these as evidence that a long-term shift in the Taliban’s strategy of recruiting non-Pashtuns as fighters and commanders is paying off (Stars and Stripes, 10 September 2019).

In India, even though communication services have partially and gradually been restored, the ongoing security lockdown in Kashmir continues to result in relatively low numbers of reported riot and protest events. The latest Kashmir crisis has also contributed to a further decline in India-Pakistan relations and renewed talks about the risk of armed conflict between the two nuclear countries. Over the past weeks, frequent clashes between Indian and Pakistani forces have been reported across the Line of Control (LoC). Meanwhile, nationwide Kashmir solidarity rallies continued in Pakistan. Pakistan’s Prime Minister Imran Khan addressed one of those rallies in Muzaffarabad, the capital of Pakistan-Administered Jammu and Kashmir, warning that the Indian government’s latest move would push people into extremism (Al Jazeera, 13 September 2019).

In other news, border disputes also led to a flare-up of tensions between India and China last week. A scuffle broke out between Indian and Chinese troops after Chinese soldiers allegedly objected to Indian soldiers patrolling the banks of the Pangong Tso river in eastern Ladakh. Border disputes between India and China have long been a point of contention between the two countries. In April this year, Indian Prime Minister Narendra Modi and Chinese President Xi Jinping met for an informal summit to improve bilateral relations and resolve border issues. Xi is scheduled to visit India next month for a second informal summit (Daily Excelsior, 12 September 2019).

In Myanmar, there was a decline in the number of battles last week between the Myanmar military and the Brotherhood Alliance, though clashes were reported in Kyaukme and Namhsan townships in Shan state between the military and an individual member of the alliance, the Palaung State Liberation Front/Ta’ang National Liberation Army (PSLF/TNLA). Another member of the alliance, the Arakan Army (AA), continues to clash with the military in townships across northern Rakhine state. As battles between the military and ethnic armed organizations continue, several hundred youths in Kachin state staged a protest calling for an end to the many wars in the country. The protests come as two Kachin activists were recently sentenced for a performance in June marking the eighth anniversary of the start of renewed conflict in Kachin state (Irrawaddy, 6 September 2019).

In the Philippines, a suspected Abu Sayyaf Group member detonated a suicide bomb in front of a military camp, reflecting the increasing use of suicide attacks by the group (Asia Times, 13 September 2019). For the second week in a row, no events were reported concerning separatists in Thailand.

Several demonstrations were reported in Indonesia concerning proposed changes to the Corruption Eradication Commission Law. While some protests were in support of the proposed changes, others were opposed to the revisions. Those opposed believe that the new changes would weaken the independence of the commission in its efforts against corruption in the country (Transparency International, 10 September 2019). 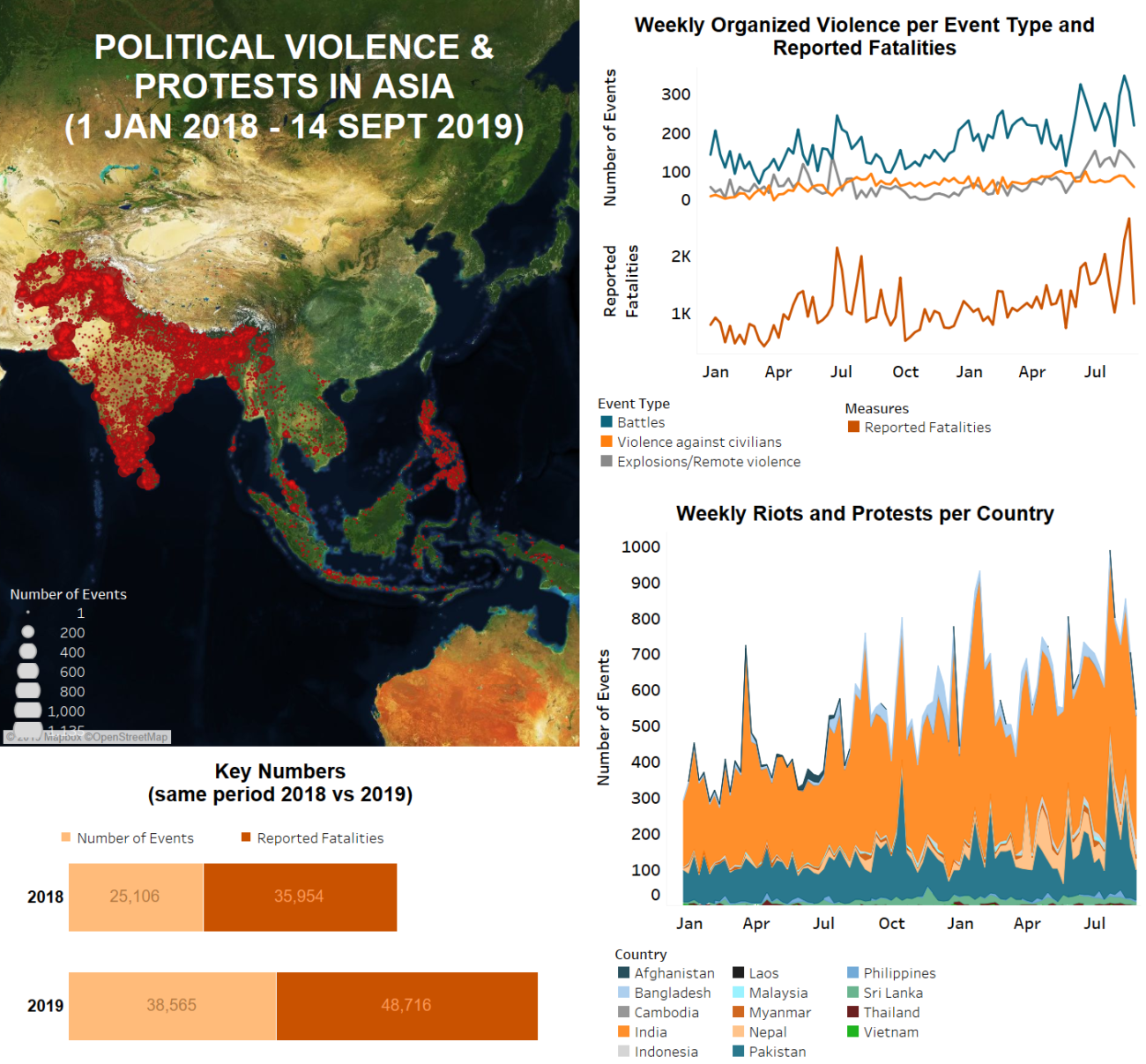