Last week, there were few significant developments in the Balkans and Southeastern and Eastern Europe with protests and riots on predominantly local issues reported, similar to past weeks. In Serbia, opposition parties announced a boycott of the upcoming elections. The local elections in Russia occurred without reported violence, but with various claims of irregularities, sparking only a handful reported protests. In Ukraine, the fighting in Donbass continues to increase steadily back to pre-ceasefire agreement levels.

In Serbia, opposition parties, gathered around the Alliance for Serbia, declared they will boycott the April 2020 parliamentary elections. The opposition does not expect the elections to be free and fair. Their ability to campaign in the media and speak in Parliament is hamstrung and they accuse the ruling Progressive Party (SNS) of pressuring and usurping government institutions (Serbian Monitor, 15 September 2019). Serbian opposition parties have been boycotting Parliament since February 2019 (EuroNews, 2 February 2019). Anti-government protests, which have declined significantly since March 2019, are expected to increase in the long run-up to the April 2020 elections.

In the Donbass region of Ukraine, the steady increase of fighting between Ukrainian government forces and separatist rebels continues. Over the past weeks, fighting has been steadily rising back to the levels seen before the July ceasefire agreement. Last week, 152 armed clashes and 122 shelling incidents resulted in six reported fatalities.

In Russia, country-wide local elections were held. In the weeks prior, refusal to register independent candidates in Moscow and other cities sparked weeks-long mass protests – the largest since 2011. No significant violence was reported during the elections, but there were widespread reports of voting fraud and irregularities across the country (Meduza, 12 September 2019). Shortly after the election, coordinated police raids on opposition headquarters in at least 40 cities took place in an apparent effort to disrupt their post-election activities (MediaZone, 13 September 2019). Protests in Russia declined to the lowest levels this year, with fewer than 10 protest events reported, held predominantly over election fraud. 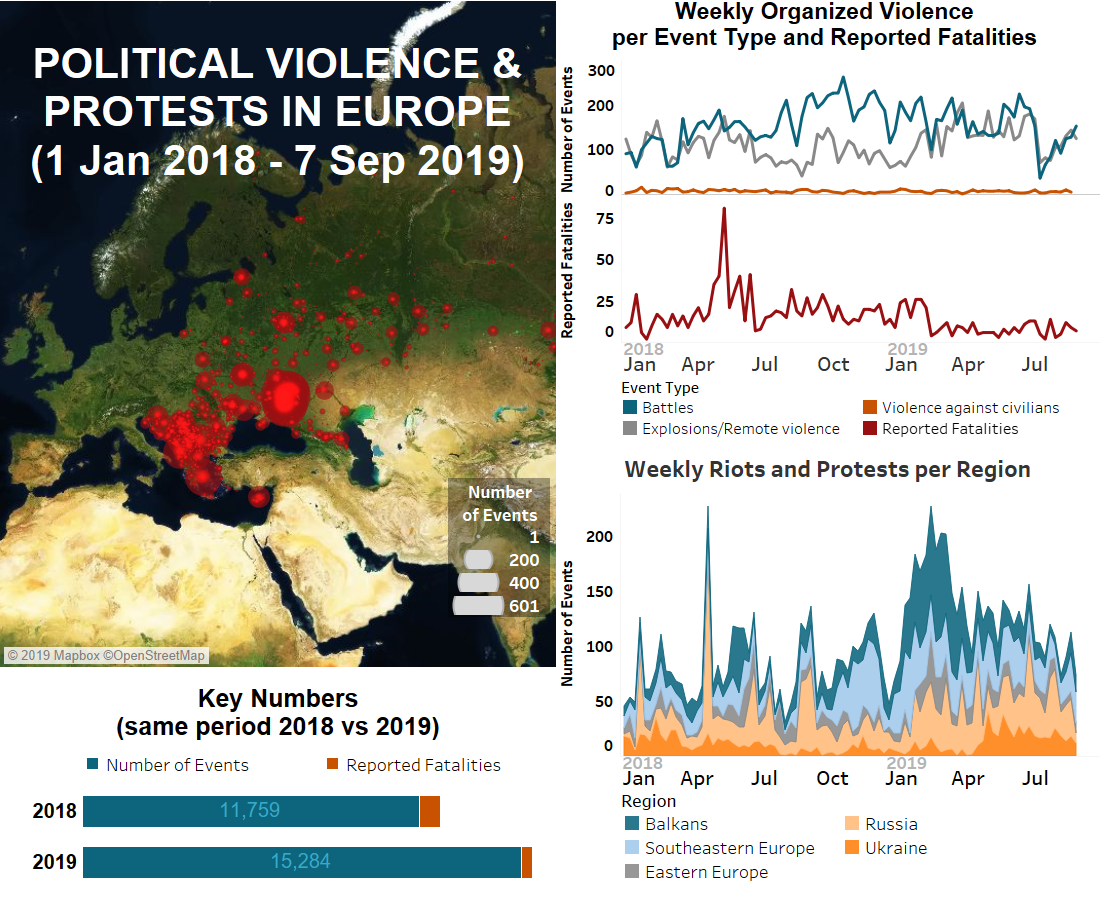