Last week in the Middle East, tensions between Iran and Saudi Arabia continued to play out via Yemen. There was a large Islamic State (IS) attack against Shiite civilians in Iraq. Suspected Israeli airstrikes were reported again in Syria. Also in Syria, citizens demanded the withdrawal of troops from Deir-ez-Zor. Finally, Israel’s election resulted in a near tie with no party achieving a clear victory.

Last week in Yemen, Houthi forces allegedly attempted to attack the Saudi coalition’s naval forces in the southern Red Sea using an unmanned, rigged boat. The Saudi coalition responded by carrying out airstrikes on the port city of Hudaydah, in violation of the Stockholm agreement. Saudi airstrikes reportedly targeted the Houthis’ capacity to mount remote-controlled assaults on shipping in the Red Sea (The Guardian, 20 September 2019). These clashes bring Yemen closer to being both a trigger and a site for larger regional conflicts, which would only further entrench Yemenis internally against each other, and would leave Yemen with no end in sight to the war.

Battles between pro-Houthi and pro-Hadi forces continue with an uptick in fighting in Hajjah governorate. Tense clashes between forces supporting Yemeni president, Hadi, and the UAE-trained Security Belt forces supporting the Southern Transitional Council (STC) resulted in pro-Hadi withdrawal from Shuqrah, Abyan in an apparent victory for pro-STC forces for the time being. These clashes are only expected to continue to build up tensions between Saudi Arabia and the UAE and place Yemen once again as the site of contention for these forces.

In Iraq, IS carried out one of the biggest attacks targeting civilians in the past two years, reportedly killing 12 civilians and injuring 5 with an explosive device on a bus at a northern entrance to the holy city of Kerbala. The bombing last Friday happened during the 40-day mourning period for Hossein Ibn Ali, the third Shiite Imam. Since late 2017 – when Iraq declared victory against the IS – the group’s sleeper cells have continued to carry out sporadic attacks against government positions, but attacks targeting Shiite religious gatherings have been rare in recent years (VOA, 21 September 2019). Ahead of Arbaeen, when millions of Shiite pilgrims are expected to gather in Kerbala, Iraqi forces have increased their presence and security measures around the area (Reuters, 21 September 2019).

In Syria, suspected Israeli warplanes targeted sites in Abu Kamal in Deir-ez-Zor Governorate, belonging to pro-Iranian forces, leading to reports of numerous fatalities and the destruction of a training camp and ammunition storehouse. Airstrikes by Israel have increased sharply in the past few months on Iranian-backed forces in Syria and Iraq, with the latest strike constituting the third attack in the Boukamal region of Syria in the past month (Times of Israel, 19 September 2019). Israel says it is keeping Iran from gaining a foothold in the area and is preventing the creation of a land corridor through which arms and fighters could be transported to the Lebanese Hezbollah (Middle East Monitor, 17 September 2019). Initial reports that Saudi fighter jets were involved in the airstrike on Tuesday have been denied by Saudi sources in the meantime (Jerusalem Post, 19 September 2019).

Furthermore, in Syria, demanding the withdrawal of regime troops and Iran-backed militias from the area, a group of demonstrators stormed a security checkpoint between the areas controlled by the Syrian Democratic Forces (QSD) and the areas controlled by the regime forces outside the city of Deir-ez-Zor. The Syrian Observatory for Human Rights reported that some of the demonstrators were armed and were members of the QSD (Syrian Observatory for Human Rights, 21 September 2019).  According to local sources, two demonstrators were reportedly killed and 10 were injured by the Syrian government forces (Kurdistan24, 20 September 2019).

In the 17 September elections in Israel, Gantz’s Blue and White alliance won 33 Knesset (Israeli Parliament) seats, while Netanyahu’s Likud gained 31 seats, with neither having a clear path to forming a coalition. The two major parties are likely to enter negotiations over a unity government, probably with other right-wing parties, but a third election is still a possibility as there was not a clear winner. Netanyahu’s election tactics, including pledging to annex Jewish settlements in the West Bank and the Jordan Valley and warning that Israeli Arabs would “steal” the election, did not serve the intended purpose and seem to have motivated Arab citizens to vote in large numbers, reducing his share of the vote (NY Times, 20 September 2019). Also in the meantime, in an effort to keep Netanyahu out of office, the Arab Joint List has given its support to Gantz, making it likely that he will get the first chance to form a government. This marks the first time since 1992 that an Arab party has endorsed a Jewish candidate (The Telegraph, 22 September 2019). It is not entirely clear where Gantz stands on the issue of the annexation of the Jewish settlements in the West Bank and the Jordan Valley, although, like Netanyahu, he rejects withdrawing from all of the occupied West Bank (BBC, 17 September 2019). 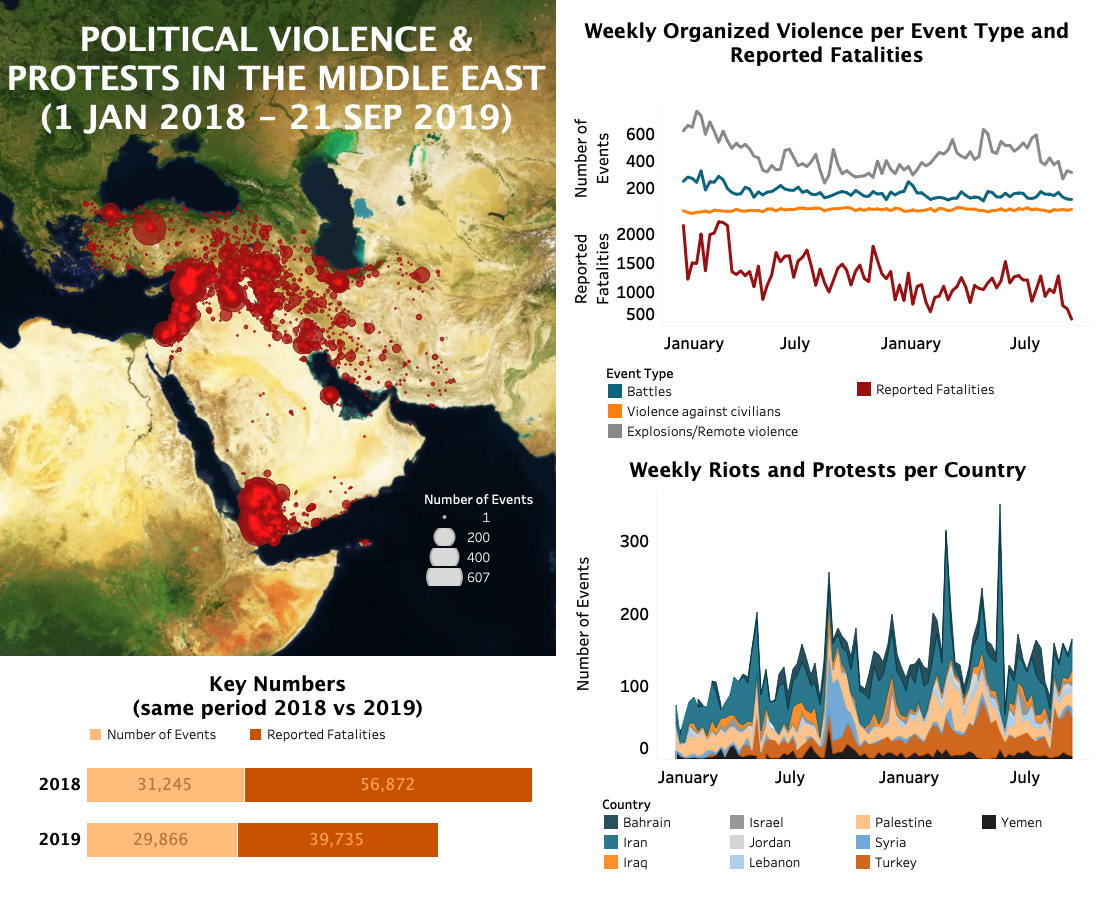