Last week, several riot and protest events erupted in overcrowded Greek migrant camps. In Croatia, protests were held over the judicial handling of violence against women. The failed bid to start European Union (EU) accession negotiations for Albania and North Macedonia resulted in snap elections called in North Macedonia, and a likely restart of anti-government demonstrations in Albania. In Ukraine, demonstrations against an agreement on Donbass were held for the third week, while fighting in the Donbass region continued at similar levels to weeks prior.

In Croatia, a series of protests were held throughout the country after the release of suspects in a rape case of a teenage girl. The news sparked national outrage and a public discussion on how violence against women is processed in the courts. Protests were held in over 10 cities in Croatia under the slogan “Justice for Girls” (Balkan Insight, 19 October 2019).

EU heads of state failed to unanimously approve the start of accession negotiations with Albania and North Macedonia (Balkan Insight, 18 October 2019). This led the opposition in Albania to call for early elections, accusing Prime Minister Rama of not making enough efforts to secure EU approval. The opposition has been holding off on anti-government demonstrations since late September in order to not jeopardize the country’s bid for EU-accession. With prospects for EU-membership breaking down, and PM Rama refusing to schedule early elections, anti-government demonstrations are likely to restart.

In North Macedonia, the failure to secure the start of accession negotiations led Prime Minister Zaev to call snap elections for 12 April 2020. During his term, Zaev had made unpopular reforms and concessions – angering nationalists in the process – with the promise of securing membership to the EU and the North Atlantic Treaty Organization (NATO)(OBC Transeuropa, 24 October 2019). Now that the dream of EU membership is slipping away, it is uncertain if the reform-minded coalition parties can stay the course and win another election against the nationalist-authoritarian party of the Internal Macedonian Revolutionary Organization-Democratic Party for Macedonian National Unity (VMRO-DPMNE), which had been removed from power after mass demonstrations during the 2016 ‘Colorful Revolution’.

In Greece, a mass riot erupted among Afghan and Syrian inhabitants of the Samos migrant camp. It resulted in a fire that burned down a large part of the camp, further straining conditions and increasing tensions inside the camp (InfoMigrants, 15 October 2019). Migrants protested almost daily, asking to be transferred off Samos. The Samos camp situation illustrates overcrowding and disorder within migrant camps across Greece. The situation causes several riots and protests across the country each week.

In Ukraine, demonstrations “against capitulation [to Russia]” – criticizing recent agreements reached by the Trilateral Contact Group on Donbass – were held in a handful of cities for the third week in a row. While the number of demonstration events decreased compared to weeks prior, opposition was concentrated in a large demonstration in the capital Kiev, which was reported to have at least 12,000 participants (The Guardian, 15 October 2019). In Donbass, fighting between Ukrainian government forces and separatist rebels continued at similar levels to weeks prior, with 173 armed clashes and 191 shelling incidents resulting in three reported fatalities. 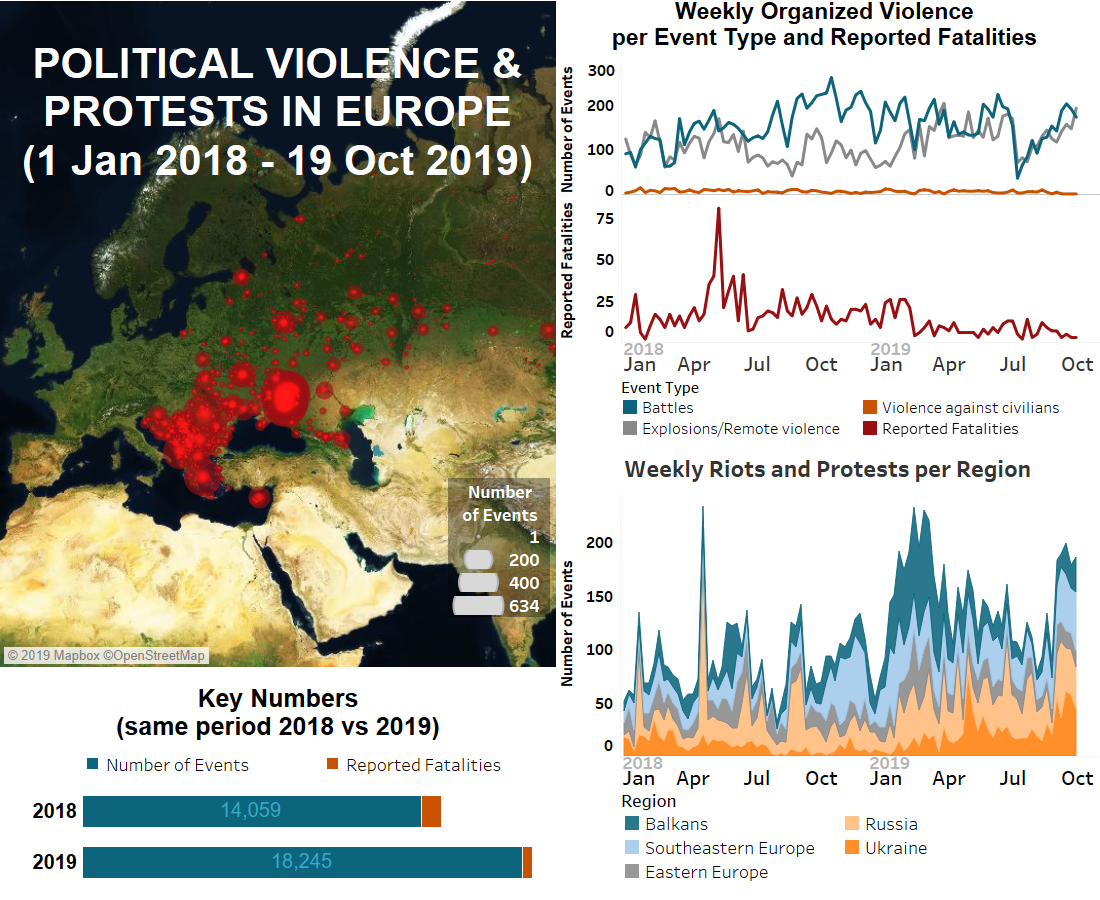