Last week in the Middle East, the ceasefire agreement for Operation Peace Spring reduced the number of events reported on the Turkey-Syria border. The Islamic State (IS) continued its recent string of attacks in Iraq. In Iraq and Lebanon, anti-government demonstrations were widespread. Finally, in Yemen, clashes between pro-Houthi and pro-Hadi forces continued, but in many areas, there were reductions in reports of clashes due to negotiations on multiple fronts.

In Syria, reports of clashes related to the Turkish Operation Peace Spring largely subsided in northeastern Syria as the ceasefire deal brokered by Russia took hold. Under the terms of the agreement, QSD (Syrian Democratic Forces) and Kurdish YPG (People’s Protection Units) forces withdrew from the key border cities of Ras al Ain and Tal Tamer as well as a number of surrounding villages. Simultaneously, Syrian state forces deployed their forces to areas previously-held by QSD, including the strategic towns of Quamishli and Ain al Arab. In addition, Russian military forces began patrols along the new frontlines between Turkish and Syrian forces in the Quamishli and Ras al Ain districts in Al-Hasakeh and Menbij in Aleppo provinces. There were, however, still sporadic battles and artillery bombardments across northeastern Syria between the two sides. Despite the formal halt in hostilities, 28 civilians were reportedly killed across Al-Hasakeh and Raqqa provinces. Moreover, protests denouncing the Turkish-led operation continued across northeastern Syria.

In other notable developments, Abu Bakr al-Baghdadi, leader of IS, was killed in a raid by American special forces in the town of Barisa in Idleb province early Sunday morning (Al Jazeera, 27 October 2019). This event will be included in next week’s data release as it occurred on 27 October.

Meanwhile, in Iraq, IS continued its latest string of attacks in Salahuddin and Diyala provinces, with the killing of two high ranking police officers along with four other police personnel in the former province early last week (Reuters, 22 October 2019). While attacks on security forces by IS are common, attacks on senior commanders have been rare, hence the importance of this attack in bolstering the image of a returning IS. The security forces responded by launching a large-scale military operation to hunt down IS elements in the eastern Tigris axis, in the name of fallen commander Ali al-Lami.

Following reports from the week prior that a village fell to IS and last week’s string of assassinations of local leaders in Abu Saida, military and police reinforcements were sent to secure the area and to expel IS militants. A curfew was also issued in al-Muqdadiyah, Abu Saida and al-Wajih districts (The Baghdad Post, 24 October 2019).

Perhaps the biggest news in Iraq last week revolved around the demonstrations which restarted on 24 October, which were called for a week ago. By Saturday, a total of 42 people were reportedly killed following demonstrations in Baghdad, Diwaniyah, Thi-Qar, Muthanna, Basrah, and Missan provinces (The Independent, 26 October 2019). At least 50 political party offices were burned down. In a bid to contain the violence, security forces announced curfews across most of Iraq’s southern provinces, though brief protests took place nevertheless in Diwaniyah, Nasiriyah, Babylon and Najaf (Asharq al-Awsar, 26 October 2019). This is the second major bout of political violence in relation to demonstrations this month and represents the continuing discontent of the people, as well as Prime Minister Adel Abdul Mahdi’s struggle to address that discontent (ACLED, 23 October 2019). The prime minister on Saturday ordered the counter-terrorism services (CTS) onto the streets of Baghdad and the southern city of Nasiriya with orders to “use all necessary measures” to end the demonstrations (The Guardian, 27 October 2019). As demonstrations rage on, it will be important to watch if IS decides to take advantage of the security vacuum and escalate attacks, especially following the news of Al-Baghdadi’s death in Syria.

Similarly, in Lebanon, anti-government demonstrations continued daily with around 40 demonstration events reported per day around the country. Like the week before, the majority of the demonstrations were peaceful, though there were reports of burning tires and a few clashes with police as well. No fatalities were reported. The resignation of Prime Minister Saad Hariri on 29 October and the effects that it has on disorder in the country will be included in next week’s data release.

In Yemen, a preliminary agreement between the pro-Hadi government and southern secessionists under the Southern Transitional Council (STC), in what will be called the “Riyadh Agreement” brokered by Saudi Arabia with support from the United Arab Emirates, was drafted. This agreement would constitute an important strategic event that would expand the political influence of southern secessionists in the internationally-recognized government in exchange for refocusing efforts on fighting the Houthis. Moreover, Saudi military forces will replace UAE forces across the country, signifying a major strategic reorientation for the UAE (Financial Times, 27 October 2019).

In an effort to contain the violence in Hodeidah, five ceasefire observation posts were set up in Hodeidah by the Redeployment Coordination Committee (RCC) and the United Nations Mission to Support the Hodeidah Agreement (UNMHA). The posts were set up after both the Hadi government and the Houthis were consulted and agreed. The posts, which are manned by UN forces, would act as observers of the truce in Hodeidah, in hopes of upholding the Stockholm Agreement (Asharq al-Awsat, 23 October 2019). However, the daily shelling attacks by both the Coalition-supported forces and pro-Houthi forces continued in Hodeidah, and the impact is yet to be seen.

Moreover, clashes between pro-Houthi forces and pro-Hadi forces and affiliates continued in Ad-Dali, Sadah and Hajjah governorates, with most of the intense fighting concentrated on the Malaheet frontline in Sadah governorate. Pro-Houthi forces and pro-Hadi forces both fought to regain territories along the frontline. Throughout the south of Yemen, very few clashes were reported in Abyan, Shabwah, and Aden governorates. There were no Houthi attacks reported in Saudi Arabia last week. 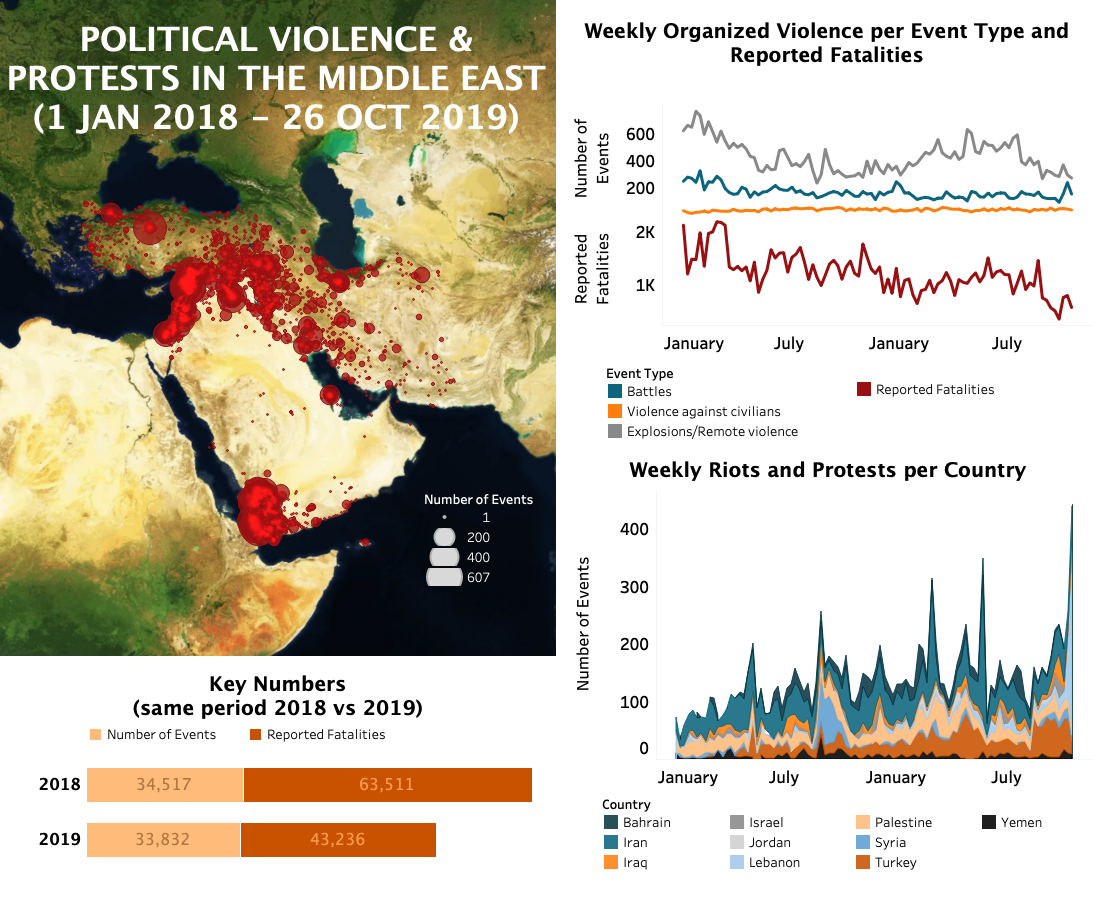