Key trends in South Asia last week include: domestic militant activity in Pakistan; continuing demonstrations against a controversial bill in India; and demonstrations in India and Nepal over territorial concerns.

In Pakistan, multiple attacks perpetrated by domestic militant groups targeting security forces were reported in the restive province of Khyber Pakhtunkhwa. Tehrik-e-Taliban Pakistan (TTP) fired rockets at a security force cantonment in Khyber district. Hizbul Ahrar, a splinter group of TTP, claimed responsibility for two roadside bomb attacks in North Waziristan district, resulting in the reported deaths of four security personnel. In Bajaur district, suspected militants fired rockets at the house of an Awami National Party (ANP) leader. Leaders and activists of the secular ANP have come under frequent attacks due to their strong opposition to the Taliban and broader militancy in the region (RFE/RL, 29 June 2019). Furthermore, recent attacks on political leaders and pro-government tribal elders in Bajaur have caused concern about a militant resurgence in the area, which was controlled by TTP between 2006 and 2009 (Gandhara, 5 September 2019).

In India, demonstrations against the Citizenship Amendment Bill (CAB) were reported in the northeast states of Assam and Meghalaya. Demonstrations against the bill have resurfaced in recent months following a pause which coincided with the Lok Sabha elections in April and May 2019. Opponents of the bill, which would grant citizenship rights to undocumented non-Muslim immigrants, contend that legitimizing undocumented immigrants would threaten the indigenous communities of the region (for more on the CAB, see this ACLED report).

Elsewhere in northeast India, fears over the redrawing of internal boundaries have prompted significant demonstration events in Manipur state. The Coordination Committee on Manipur Integrity (COCOMI), a network of local civil society organisations, has led a wave of demonstrations over concerns that recent terms of an agreement between the central government and Naga rebels may compromise the integrity of Manipur state (Hindustan Times, 9 November 2019). The concerns have arisen over long-standing rebel demands for the implementation of a new state of Nagalim, to be carved from Naga-majority areas in Manipur, Assam, Arunachal Pradesh and western Myanmar (Al Jazeera, 6 October 2019). The Naga peace process was launched in 2015 and has attempted to bring an end to the long-running insurgency which began in the 1950s (Hindustan Times, 19 October 2019).

In Nepal, the Indian government’s release of a new territorial map, following the bifurcation of the erstwhile state of Jammu and Kashmir, has triggered nationwide demonstrations. The map, which includes Indian-administered Kalapani within India’s Uttarakhand state, has reawakened tensions over the site of a long-term territorial dispute between the two countries (Indian Express, 12 November 2019). The dispute over Kalapani — located at the tri-junction of India, China (Tibet) and Nepal — has its roots in conflicting maps produced by British India in the 18th century, and has been garrisoned by India’s Indo-Tibetan Border Police since the 1960s (The Print, 11 November 2019). 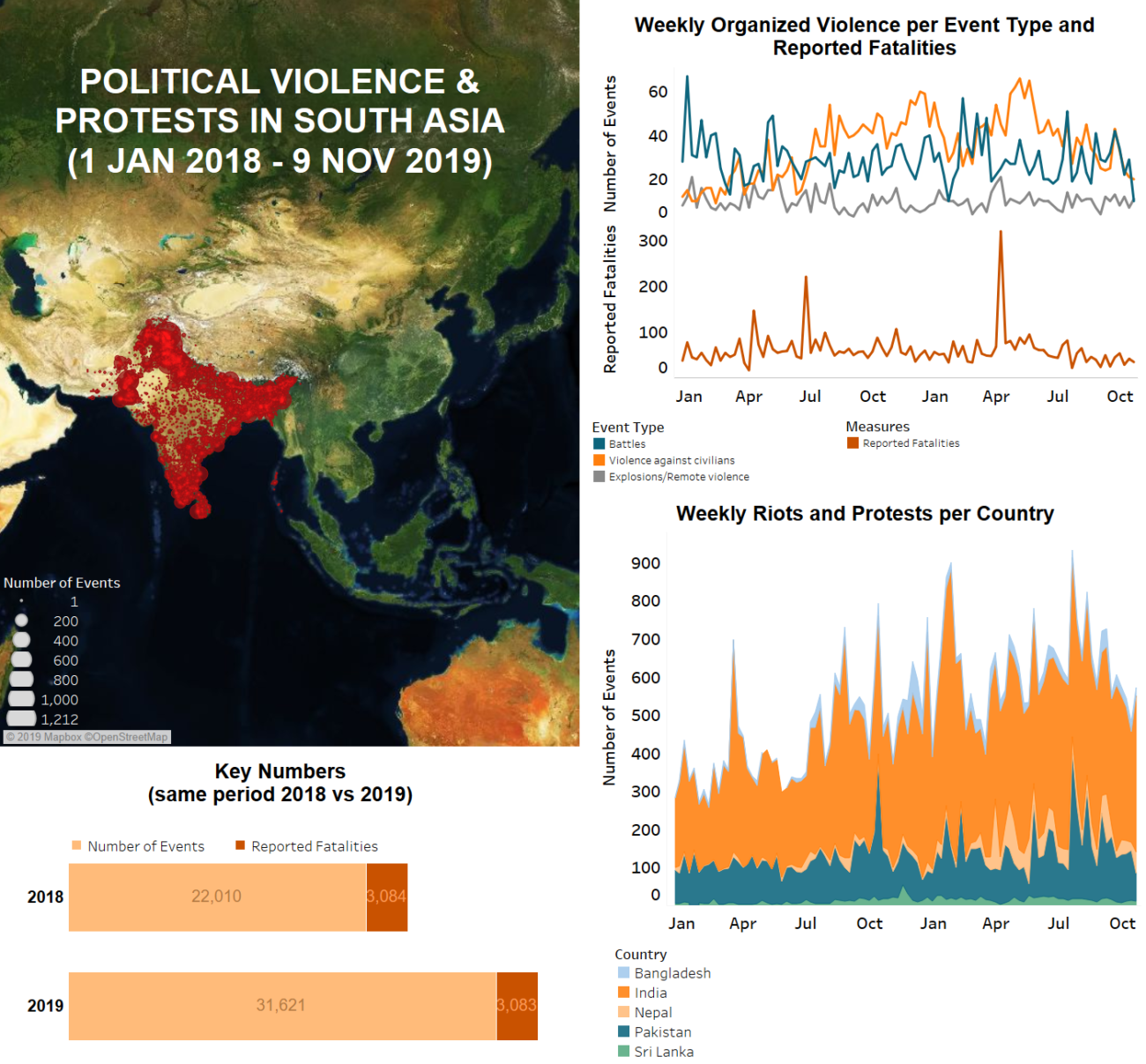