In Sri Lanka, numerous incidents of election-related violence were reported during the week of the country’s presidential election, won by Sri Lanka Podujana Peramuna (SLPP) party candidate Gotabaya Rajapaksa. The violence included clashes between supporters of different political parties, as well as attacks on Muslim voters and Tamil voters. In one such incident, an unidentified group pelted stones and fired on a convoy of buses carrying hundreds of Muslim voters to a polling station in Anuradhapura district.

The violence has come amid wider fears that Rajapaksa’s victory might exacerbate existing fractures between the Sinhalese-Buddhist majority and the Tamil and Muslim minority, amongst which the SLPP performed poorly (The Diplomat, 18 November 2018). The SLPP ran their campaign on a strong national security platform, with the backing of nationalist-Buddhist groups that have been accused of fuelling anti-Muslim sentiment (The Guardian, 16 November 2019), particularly following the Easter bombing by Islamic militant groups. Within the Tamil community, concerns date back to Gotabaya Rajapaksa’s position as the defence secretary during the Sri Lankan Civil War, under which the Sri Lankan armed forces are accused of perpetrating widespread human rights abuses (Al Jazeera, 17 November 2019). These alleged abuses prompted demonstrations throughout the week by members of the Tamil community, demanding to know the whereabouts of disappeared family members.

In Balochistan, suspected militants reportedly killed three security personnel when they detonated a remote controlled IED in the suburbs of Quetta city. The attack was the latest in a series of bomb blasts that have targeted security forces in the city since mid-October.

In India, mass demonstrations continued across Manipur, after the Coordinating Committee on Manipur Integrity (COCOMI) rejected government assurances that a peace agreement between the government and Naga rebels would not compromise the integrity of Manipur state (Indian Express, 13 November 2019). Demonstrators also launched a new tactic to increase pressure on the government, attempting to surround the residences of politicians in Imphal East and Thoubal districts. Police blocked demonstrators in several locations. The skepticism surrounding the peace agreement stems from long-standing rebel demands for the implementation of a new state of Nagalim, to be carved from Naga-majority areas in Manipur and other states (Al Jazeera, 6 October 2019). 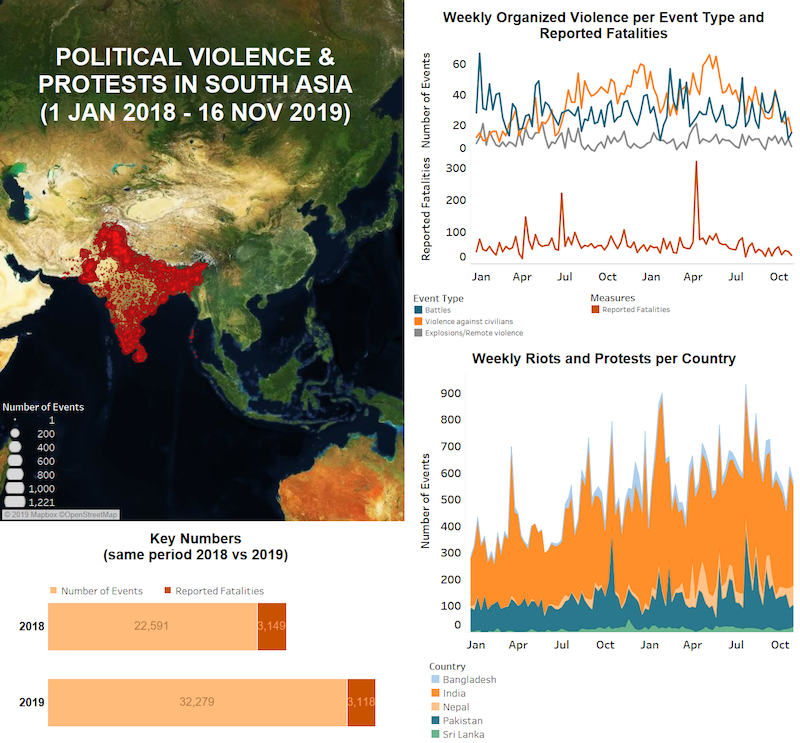