This week, Africa has experienced an overall decrease in conflict across the continent, despite violent incidents contributing to a rising number of fatalities in Burundi, Central African Republic and in the Sahel. Western Africa was the most violent region in the continent, accounting for more than 40% of total reported fatalities last week.

In Mali, militants affiliated with the Islamic State in the Greater Sahara (ISGS) ambushed a Malian Army’s convoy in Tabankort, near the border with Burkina Faso and Niger, killing dozens of soldiers. The Malian Army claims to have killed 17 militants while hundreds were arrested in an operation conducted by Nigerien forces. The attack is the latest in a string that has killed more than 100 army troops since October.

In neighboring Burkina Faso, Islamist militants attacked a military base in Arbinda, a town located at the intersection between the northern Soum and Sahel provinces. The Burkinabe army repelled the attack, killing 18 fighters. The region has experienced a recent spike in violent activity, as Islamist groups linked to Al Qaeda and the Islamic State attempt to take control of the region’s gold mines. Elsewhere in the country, intercommunal violence claimed the lives of dozens Fulani pastoralists, as Mossi and Foulse ethnic militias attacked the village of Solle in the Nord region.

In Nigeria, Fulani militias raided the town of Karaye in Zamfara State and killed 14 people, including children and women, raising concerns over renewed violence in the area. The Karaye incident is suspected of being a reprisal for the November 3 attack in Yansakai, when nine Fulani pastoralists died. In Borno State, at least eight Nigerian soldiers died in clashes with Boko Haram fighters near Gwoza and Marte, while the air force struck Boko Haram positions around Jubillaram.

Additionally, tensions were reported in Guinea, where local youths erected roadblocks and threw stones at the Prime Minister’s cortege traveling to Mamou and Labe, and in Togo, where a wave of attacks targeting police patrols in Agoe, Lome and Sokode on the night of November 23 resulted in the injury of three gendarmes.

In Burundi, unidentified Rwandan militants ambushed a group of soldiers in the Kibira forest, killing at least 17 people and abducting dozens more, including civilians. Clashes pitting the RED-TABARA and FOREBU coalition against army troops and Imbonerakure continued in the northwest of the country and in Rumonge, while security forces and CNDD-FDD continue to target CNL supporters across the country.

With the upcoming presidential elections scheduled on December 12, Algeria has entered the 40th week of demonstrations sparked last February after former president Bouteflika formalized its candidacy. Protesters continue to retain their largely peaceful character and demand the liberation of all detained activists, accusing the army of stepping up arbitrary arrests in the run-up to the presidential ballot.

In Sudan, clashes between Beja clans took place in Port Sudan following the return of United Popular Front for Liberation and Justice leader El Amin Daoud. Between November 18-19, six people died and at least 28 were injured as members of the two groups clashed using bladed weapons. The paramilitary Rapid Support Forces, commanded by Vice President Mohamed Hamdan Dagalo “Hemedti”, intervened to restore order. Elsewhere in the country, anti-government protests were held in the capital Khartoum and in Zalingei, calling the government to remove Bashir-era officials in public institutions and military governors.

In the Middle Africa region, the Central African Republic’s Armed Forces killed ten ex-Séléka fighters as hundreds of militants attempted to seize the military base of Camp Beal in Bangui. In the Democratic Republic of Congo, violence persists in Oicha, North Kivu where Ugandan ADF-NALU fighters continue to target civilian areas and military stations. At least 12 civilians were killed in a single attack on November 19, when militants also abducted others and torched a church. 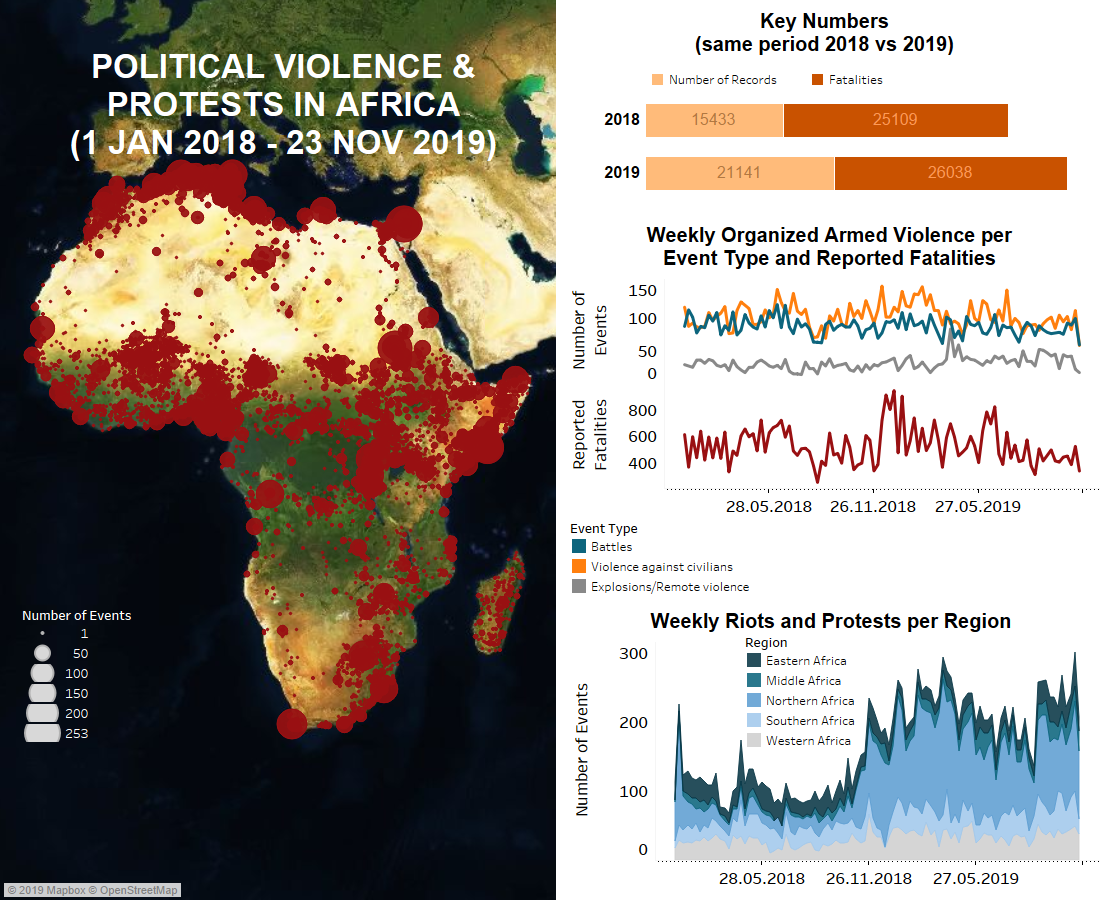