For the second consecutive week, Africa experienced a lull in violence across the continent. Reported fatalities overall decreased by one third, and by more than 40% in the Eastern and Western regions. The only exception to this trend is the Middle Africa region, where fatalities increased largely due to a spike in violence in the Democratic Republic of Congo (DRC).

In DRC’s North Kivu province, an estimated 55 unarmed civilians were killed in several attacks attributed to local armed groups, most notably the Allied Democratic Forces (ADF). These events sparked violent riots in the cities of Beni, Butembo and Goma where residents and LUCHA affiliates – a Goma-based civil society group – assaulted the offices of the local government and the UN peacekeeping mission (MONUSCO), accused of not doing enough to protect civilians. Amid rising insecurity, the World Health Organization evacuated several Ebola responders, four of which were killed in two separate attacks attributed to Mayi-Mayi militias in North Kivu and Ituri provinces.

In Libya, clashes between forces allied with the Tripoli-based Government of National Accord (GNA) and the Libyan National Army (LNA) commanded by General Khalifa Haftar flared around the key Elephant oilfield in the southern Murzuq province. On November 27, GNA troops and the recently established Southern Protection Forces, consisting of local Tebu militiamen, briefly seized the site from the LNA, which was retaken in a subsequent LNA counteroffensive. In the following days, two LNA air strikes hit a house and a water truck in Murzuq as well as a convoy of GNA forces and Southern Protection Forces in neighboring Wadi al Hayat, killing several civilians and dozens of troops, including a senior Tebu commander.

Following last week’s spike, violence largely decreased across the Sahel. In Mali, a French helicopter crashed during combat operations in the Eranga valley, near Gao, in one of the deadliest incidents in decades for the French army. The Islamic State took credit for shooting down the helicopter, although the French Chief of Staff refuted the claims and stated that no gunfire had targeted the vehicle. Separately, in Mopti province, three Malian soldiers were killed in an IED incident near Tonou, while a raid conducted by Katiba Macina (JNIM) militants on the village of Tolle sparked clashes with local self-defense forces, killing an additional three people.

In Niger’s Tillabéri area, north-west of the capital Niamey, suspected Islamist militants assassinated the village chief of Dan Marke II along with his son and raided a school in Tigueze Fan Raoufi, whipping teachers accused of spreading modern education. At least seven civilians were also killed in Burkina Faso, which continues to experience sustained militant activity across its territory, including in the Centre-Sud, Sahel and Nord provinces.

The highest number of reported fatalities was recorded in Nigeria, as clashes between army forces and Boko Haram fighters escalated in Borno State. Approximately 50 militants were killed as a result of this new military offensive supported by air strikes. Elsewhere, attacks by unknown militias on ten villages in Kwaki district of Niger state from November 22 to 24 led to massive movement of people seeking refuge and security in surrounding towns.

In Guinea, supporters of the National Front for the Defense of the Constitution (FNDC) staged new protests against a proposed revision of the constitution, demanding the release of political prisoners. Demonstrations have been ongoing since October to protest against a proposed constitutional amendment that would scrap the presidential term limit and allow President Conde to run for a third mandate in 2020. In a separate development, the Court of Appeal of Conakry approved the temporarily release of the leaders of the FNDC arrested on October 13-14.

In Eastern Africa, South Sudan experienced the highest spike in violence since September as a result of intercommunal clashes between sections of the Pakam Dinka clan in Maper town (Lakes state), which killed 23 people and injured 47. Multiple attacks involving suspected Murle raiders occurred in parts of the former Jonglei state in the first half of the week, in a possible prelude to raiding activities as the dry season enables attacks and military operations to take place with greater ease.

In Ethiopia, a number of students were arrested following a demonstration near the gates of Addis Ababa University, where they gathered to denounce recent violence targeting Oromo students in the Amhara region. Violence and riots on campuses across the country have been of major concern over the past few months. In west Shewa district, unidentified militants shot and killed two Oromia state officials and a criminal prosecutor. Attacks of this type have killed at least 8 officials over the past year, with 5 fatalities occurring during the past month alone. The Oromia Liberation Front’s breakaway faction “Shane” is thought to be responsible for the attacks.

Intra-military factional violence resulted in several violent events last week in Somalia. In Mogadishu, senior military general Yusuf Ali Qasaay “Yusuf Agey”, known for his role in fighting Al Shabaab in the capital in 2010, was shot dead by a junior military officer over a “land dispute”. Earlier in the week, a commander escaped an assassination attempt carried out by a fellow officer in Mahadaay, while a soldier died and another one was injured after an officer who hailed from the same clan group shot them in Kismayo. 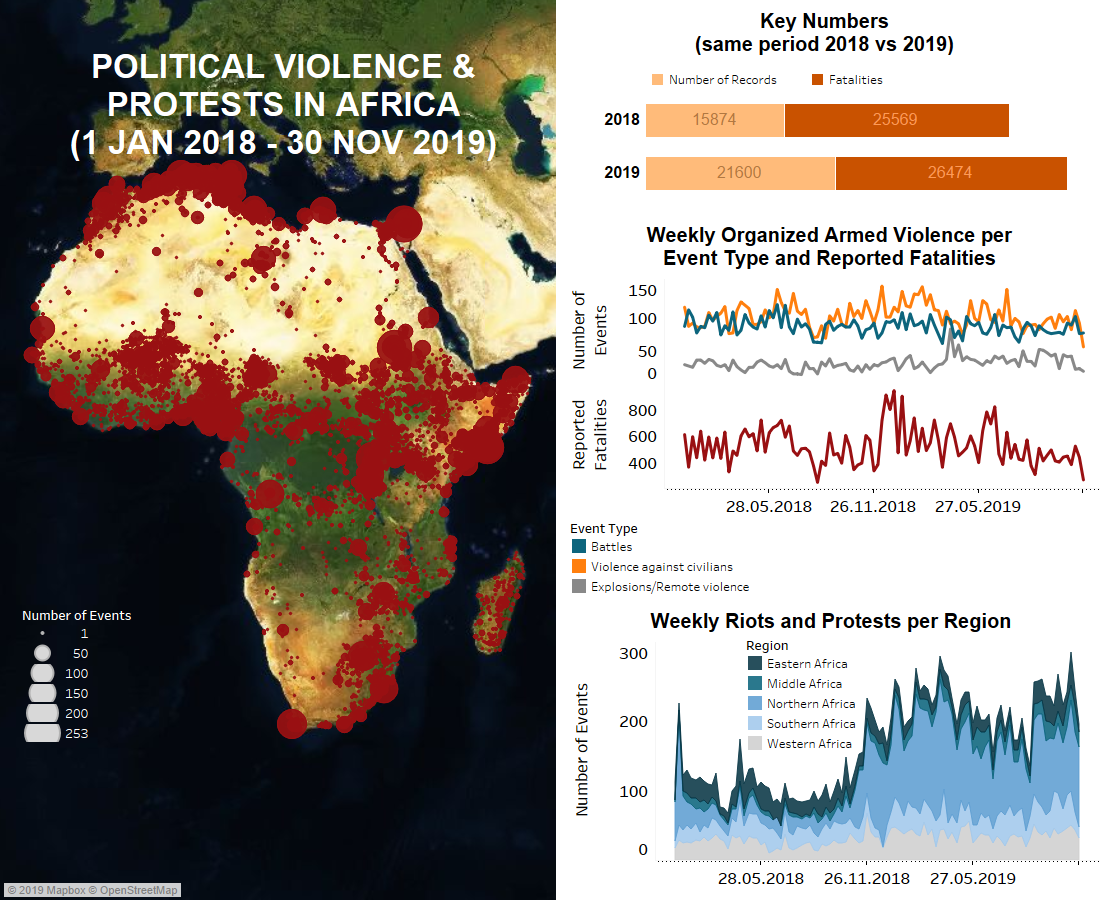