Developments in the Middle East last week included the resignation of the Prime Minister of Iraq following the deadliest day of demonstrations since they began in October. In Lebanon, concerns about sectarian clashes rose last week. In Palestine, Palestinians held a ‘Day of Rage’ in response to the US announcement that Israeli settlements are not violating international law. In Syria, clashes intensified between Turkish-led Operation Peace Spring (OPS) forces and Syrian Democratic Forces (QSD). In Yemen, fighting continued to decrease in a trend that began with the signing of the ‘Riyadh Agreement’.

In Iraq last week, anti-government demonstrations rapidly escalated, culminating in the torching of the Iranian consulate in the city of Najaf. The crackdown that followed reportedly killed 50 demonstrators in clashes with security forces. This was the single bloodiest day since the anti-government demonstrations began on 1 October (ACLED, 23 October 2019). Altogether, around 400 people have been reportedly killed since the demonstrations began (BBC, 01 December 2019). The attack on the consulate is particularly symbolic as Najaf is home to important Shiite shrines. Anti-Iranian sentiment has been rapidly growing in Iraq due to the perceived political control Iran holds over the country. This sentiment now adds a new layer of complexity to the stand-off as it represents the most serious threat to Iran’s influence in post-Saddam Iraq (The Guardian, 30 November 2019). By the end of the week, PM Abdul Mahdi resigned, along with the governor and police chief of Dhi Qar province. Curfews were also declared in Dhi Qar and Najaf provinces (The Guardian, 29 November 2019). However, the severity of the fall out between the demonstrators and the Iraqi government makes these resignations likely inadequate to bridge the divide between them. This coming week will be an indicator of whether the demonstrators intend to continue and possibly escalate demonstrations or if they will be appeased with the resignations.

Meanwhile, in Iran, after week of deadly protests, very few events were reported. Following the announcement of increased fuel prices in Iran on 15 November, riots broke out across the country. The government responded by entirely shutting down the internet. Approximately 200 demonstrators were reportedly killed by security forces in the deadliest political unrest since the revolution 40 years ago (New York Times, 01 December 2019).

In Lebanon, like prior weeks, protests continued last week and were, for the most part, peaceful. One notable exception followed the death of two people in a car accident that was possibly caused by a roadblock; sectarian supporters of the Shiite parties Hezbollah and Amal took to the streets in outrage. They attacked several peaceful demonstrations and engaged in clashes (Al Jazeera, 27 November 2019). Tensions between demonstrators, Hezbollah, and security forces are precarious and fragile in the country, which has struggled deeply with sectarian violence since the Civil War (1975-1990). Towards the end of the week, reports of demonstrations and roadblocks decreased.

In Palestine, on Tuesday, Palestinians in the West Bank and Gaza held a ‘Day of Rage’ against the US announcements that Israeli settlements in East Jerusalem and the West Bank are not inconsistent with international law. The controversial announcement contradicts prior US policy as well as that of the EU and UN (CNN, 18 November 2019). Settlements are illegal under the Fourth Geneva Convention that prohibits an occupying country from transferring parts of its population to occupied territory (ICRC, 05 October 2010). The ‘Day of Rage’ was organized by Fatah, the ruling party in the West Bank. Thousands of Palestinians demonstrated across Palestine and over 70 were injured in clashes with Israeli forces (Al Jazeera, 26 November 2019). The Return Marches were officially cancelled for the third week in a row, which may signal the end of this protest movement that has been on-going since the end of March in 2018. Organizers said that they were concerned that escalating violence on the border with Israel could help PM Netanyahu’s political position and that the protest will continue in the future (Jerusalem Post, 29 November 2019).

In Syria, the pace of clashes increased relative to previous weeks in the Ras Al Ain area of Al Hasakeh and Tell Abiad area of Raqqa provinces between Turkish-led OPS forces and QSD, although little territorial exchange occurred. Joint Turkish and Russian patrols continued along the contact points between OPS and QSD forces as Syrian government reinforcements arrived to the frontlines.

Finally, last week in Yemen, a relative drop in armed conflict events was reported in comparison to the last few weeks. This could be attributed to the ‘Riyadh Agreement’, which has led to southern forces mainly coming together to fight the Houthi forces. Most clashes occurred in Hodeidah, Ad Dali, and Abyan between pro-Houthi and Hadi-aligned forces. Meanwhile, some skirmishes by subnational groups were reported in Marib and Shabwah. Moreover, Hodeidah continues to be the site for the majority of shelling in Yemen, despite the creation of five ceasefire observation posts by the UN Mission to Support the Hodeidah Agreement (UNMHA). Both coalition-supported forces and pro-Houthis forces have violated the ceasefire agreement. 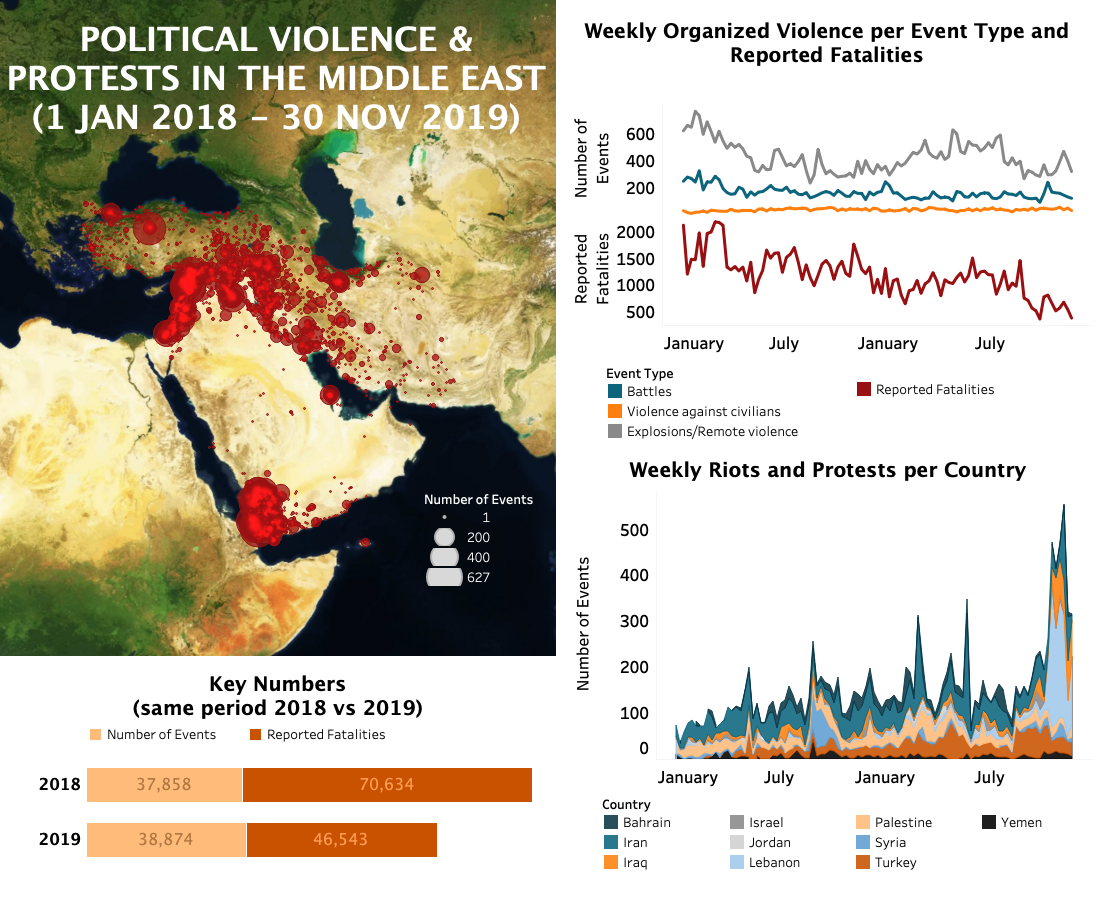