The main developments from the Middle East last week included the signing of a maritime territory deal between Turkey and Libya, which raised tensions in the Mediterranean. In Iraq, widespread demonstrations continued and took a deadly turn, reportedly leaving dozens of demonstrators dead. In Iran, a prisoner swap with the US took place last week in a rare sign of cooperation between both countries. In Lebanon, protests continued and in Palestine, the Return Marches resumed with clashes and injuries reported. Rockets were reportedly fired at southern Israel from the Gaza Strip. In Syria, Operation Peace Spring (OPS) continued in the northeast. In Yemen, while fighting continued to lull, the implementation of the ‘Riyadh Agreement’ is proving to be difficult, as clashes were reported between Hadi government forces and Security Belt Forces.

On 27 November, Turkey signed a maritime territory deal with Libya’s UN-recognized Government of National Accord (GNA). By the end of the week Turkey had already passed the deal through parliament (Anadolu Agency, 8 December 2019). The deal demarcates new maritime boundaries between the two countries, which will transect an area contested by both Greece and Cyprus, in the process also threatening a gas deal to deliver gas to Europe (Financial Times, 8 December 2019). The deal further stokes tensions in the area, complicating the peace process in Libya as well. However, at least for now, due to the rejection of the agreement by Egypt, Greece and Cyprus, Turkey’s plans for oil and gas exploration are on hold. This leaves room for diplomatic recourse to a possible solution rather than a rapid escalation that could ignite a trade war in the Mediterranean.

Moreover, last week in Turkey, three more co-mayors in Turkey’s eastern province of Van were dismissed, reportedly as part of a larger government crackdown on the pro-Kurdish Peoples’ Democratic Party (HDP). Meanwhile, clashes between Turkish forces and the Kurdistan Workers’ Party (PKK) in Turkey remain low and continue at a larger scale in northern Iraq.

In Iraq, all hopes of a calm following the resignation of Prime Minister Abdul Mahdi were dashed as clashes in Baghdad between demonstrators and the Iranian-backed Popular Mobilization Forces (PMF) reportedly left dozens of demonstrators dead (CNN, 6 December 2019). This event led to retaliatory attacks by unidentified groups, targeting the home of cleric Muqtada Sadr by an armed drone, which left him unharmed.

Meanwhile, two more rocket attacks were reported last week targeting military air bases, namely in Ain Al Asad in Anbar and Balad north of Baghdad. Both air bases host US forces and contractors. The US has been hinting that Iran is behind these attacks, as well as the attacks on demonstrators last week (Reuters, 6 December 2019).

The Islamic State (IS) has made use of the current state of disarray in Iraq and have steadily been increasing their activity over the past few weeks. The general concentration of attacks has been in Anbar, Kirkuk and Saladin provinces. The current state of impasse in Iraq’s political system, with no clear successor to Abdul Mahdi, leaves the Iraqi state in a precarious situation — one which could easily be further abused by armed groups, such as IS, or even worse, lead to the breakout of civil war.

In Iran, a weekend exchange of detainees with the US brokered by Swiss diplomats, along with other diplomatic overtures, signals an easing of tensions, if ever so slightly. This is significant in light of American speculation surrounding Iran’s involvement in the attacks on demonstrators in Iraq and on military installations hosting US troops over the past few weeks.

In Lebanon, a possible candidate for Prime Minister of Lebanon withdrew from consideration for the post last week, further prolonging the country’s political crisis (AP, 9 December 2019). Meanwhile, the main candidate to have re-emerged for consideration for the post is once again Saad al-Hariri who had resigned in October, following anti government demonstrations. If re-elected, this would surely reignite demonstrations, especially given that protesters gathered outside parliament and set up roadblocks already by the end of last week in light of this news (Al Jazeera, 8 December 2019). Minor clashes were reported with police forces attempting to remove the roadblocks.

In Palestine, the Return Marches resumed once again on Friday, following a three-week pause.  Three rockets were reportedly fired from Gaza towards southern Israel, which were intercepted by the Iron Dome (Times of Israel, 7 December 2019).

In Syria, regime and allied forces clashed with Hayat Tahrir al Sham (HTS) and rebel fighters in southeastern Idleb province in the vicinity of the town of Ma’arrat An Nu’man. Regime forces managed to capture several villages in the area as they campaign to control the strategic M5 international highway, which runs through the province. More clashes in Idleb and northwestern Hama province took place as sustained ground and aerial bombardments were carried out across northwestern Syria. Russian airstrikes were particularly deadly last week with estimates of over 20 civilians and Islamist fighters killed.

Clashes largely subsided last week between regime and Syrian Democratic Forces (QSD) against Turkish and pro-Turkish fighters operating under the Operation Peace Spring (OPS) banner in northern Al Hasakeh and Raqqa provinces. Russian mediation proved fruitful  in fostering a successful and peaceful handover of a strategic point along the M4 international highway in Tal Tamer area, Al Hasakeh from OPS to regime forces. In addition, joint Turkish and Russian patrols continued along the frontlines between OPS and QSD forces in the northeast of the country as regime and Russian reinforcements were brought into the area.

Finally, in Yemen, the ‘Riyadh Agreement’ signed between pro-Hadi forces and Southern Secessionists from the Southern Transitional Council (STC) has not brought full peace to southern Yemen, pending implementation of the reorganization of military command structures and handover of Aden to a force accepted by both sides. In a major violation of the deal, pro-Hadi forces reportedly clashed with Security Belt Forces in Shuqrah and Ahwar in Abyan governorate.

Meanwhile, the city of Aden was struck by a series of assassinations of police officers, soldiers, and citizens. There were reports of at least 10 assassination attempts throughout the week in Aden, including one claimed by IS. Clashes between pro-Houthi and pro-Hadi forces took place in Ad Dali, Sadah and Taizz governorates, but on a lower scale than previous weeks. Similarly, clashes in Hajjah governorate decreased drastically. These trends may point to a sign of goodwill by both Houthi actors and coalition-supported pro-Hadi forces (especially in Sadah and Hajjah) in light of the current secret negotiations between the two sides (Middle East Eye, 30 November 2019). 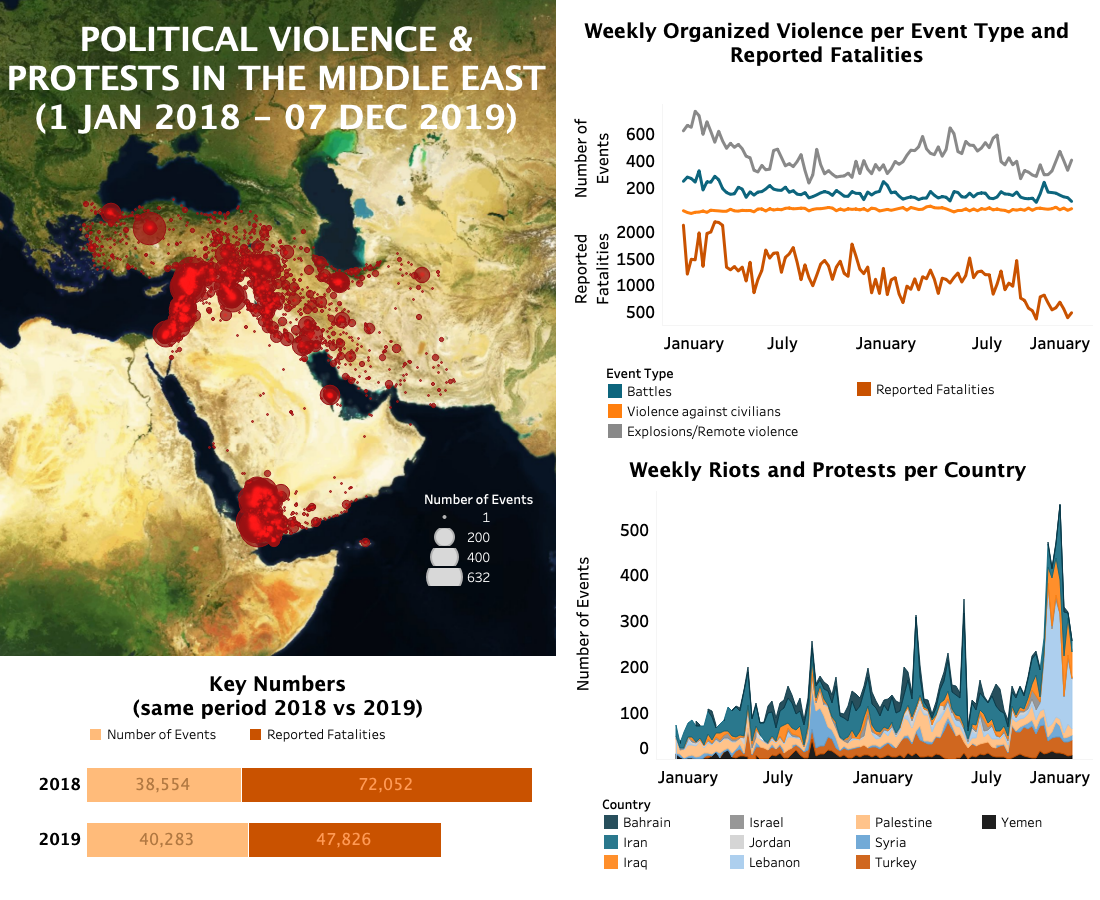