Last week, Africa experienced a marked increase in political violence, largely a result of renewed conflict activity in its Eastern and Western regions. The hotspot of violence remains the Sahel, the hotbed of a prolonged Islamist insurgency that regional governments are struggling to contain. Burkina Faso and Niger are increasingly bearing the brunt of the violence, as non-state armed groups continue to inflict heavy casualties on army troops and on the civilian population.

A day after a raid on a military base in Tahoua region, 600 km north-east of Niger’s capital Niamey, militants affiliated with the Islamic State in the Greater Sahara (ISGS) carried out an attack on a military complex in In-Ates, Tillabéri region, using mortars, suicide car bombs and heavy weaponry. At least 128 people, including 71 Nigerien soldiers, were killed in the assault, the deadliest ever recorded against the Nigerien military. The base is located in the historical Liptako-Gourma region, the epicenter of the insurgency stretching across Niger, Mali and Burkina Faso. Illicit activities conducted in the region, including weapon and drug trafficking, cattle rustling, and artisanal gold mining, provide armed groups linked to Al Qaeda and the Islamic State with financial resources and increasing access to local communities.

Militant activity also remained high in Burkina Faso, largely as a result of several attacks attributed to the Group for Support of Islam and Muslims (JNIM) against local communities in the Centre-Nord and Est regions of the country. Between December 10 and 12, at least eighteen civilians were killed in three separate raids, while a few days later unidentified Islamists – either JNIM or ISGS militants – raided the village of Kantari in the Est region, clashing with Koglweogo militiamen and killing an additional seven people. Raids against Koglweogo constituted a relatively new development since they coexisted peacefully until recent months.

In the other front of the insurgency, Mali experienced relatively lower levels of violence, despite renewed intercommunal violence in the east of the country. On December 9, suspected Fulani pastoralists attacked Dogon communities in Mopti region, killing at least three civilians and ransacking villages. In last week’s most violent event, the Malian army claimed to have killed four militants near Seguemara in Mopti, a narrative challenged by a local Fulani organization which claimed that the victims were young herders guarding their livestock. In a separate development, the Malian government declared the head of MINUSMA in Kidal ‘persona non grata’, after his remarks at the congress of the National Movement for the Liberation of Azawad (MNLA) at the beginning of December.

Clashes between the army forces and Boko Haram were reported in several areas of Nigeria’s Borno State, including with the use of air strikes targeting training camps of the group in Sambisa Forest. Additionally, suspected Boko Haram announced the execution of four aid workers held hostage since July, and of three security officers kidnapped in the previous week around Maiduguri. Despite the counter-insurgency efforts of the Nigerian military, conflict activity in Borno State decreased only by 7% compared to the past year, highlighting the persistent threat posed by Boko Haram in the region.

Elsewhere in Western Africa, Mauritania and Ivory Coast experienced high protest activity last week, often turning violent in the latter case. Following a general strike on December 10, teachers, health workers and other categories held sit-ins and demonstrations in the Mauritanian capital Nouackhott and across the country demanding higher salaries and better working conditions. In Ivory Coast, at least three students were killed amid nationwide riots, prompting a violent crackdown by the security forces.

Somalia also experienced an uptick in violence compared to previous weeks, with at least 85 deaths recorded over the past week. The increase is largely attributed to clan-based violence in Mudug region, where the Saad and Dir clan groups allegedly clashed over land disputes resulting in at least 40 dead and 50 injured. Separately, Al Shabaab took credit for a grenade attack against the SYL hotel in central Mogadishu, sparking a prolonged battle with the Somali military that killed at least five people, including unarmed civilians. Al Shabaab claims to have inflicted heavy losses on the military, but these estimates cannot be verified at the time of writing. Clashes between Al Shabaab and the Somali army have increased over the past weeks, resulting in the takeover of villages and other populated areas by either side.

Violent skirmishes also continued to occur intermittently across Ethiopia, with at least three university students being killed during the week. Ethnic tensions have run high in recent weeks, and students of an ethnicity from outside the region they are attending university in, are sometimes subject to attacks and beatings. Additional security measures have been taken, including placing university security in the hands of the federal police. Ethnic clashes between Karrayyu Oromo and Argobba militias, and between the Amhara and Gumez, also left an additional six fatalities in the Oromia and Benshangul-Gumaz regions respectively.

Further, a string of attacks attributed to the Dahalo militia killed at least four civilians in Madagascar in the past week. Dahalo’s activity is often linked to cattle rustling and poaching, and often targets exposed and inadequately protected local communities. Attacks by the Dahalo have killed an estimated 141 civilians in 2019, increasing by 50% compared to the past year.

In the Democratic Republic of Congo (DRC), the Allied Democratic Forces (ADF) continue to attack villages in the region of Beni, further exposing the endemic insecurity plaguing the area. Machete-wielding militiamen killed an estimated 16 people, although the toll might be higher. Another militia known as Cooperative for Development of Congo (CODECO) killed an additional 9 people in Ituri, abducting many others.

In North Africa, the week was marked by the presidential elections in Algeria, which saw a low turnout on Thursday. Protesters demanded the boycott of the ballots, and rejecting the results as rigged. It is still unclear whether protesters will escalate tactics in an effort to force further concessions from the regime, and whether the army will crack down on demonstrations should these impose further political and economic pressure. In Egypt, confrontations between Islamic State militants and the Egyptian military intensified at the beginning of the week, as the Islamists claimed a series of attacks against military targets in North Sinai on Sunday and Monday.

In Sudan, deposed President Omar al-Bashir was sentenced to two years imprisonment in a correctional institute for elderly prisoners, on charges of corruption. Bashir also faces charges relating to the 1989 coup that brought him to power, as well organizing violence against protesters. Meanwhile, armed pastoralists, Rapid Support Forces and paramilitaries conducted several attacks in Darfur. In Abyei, suspected Misseriya nomadic militiamen killed three people as they attacked a Ngok Dinka community in Lou area. Fighting flared up once more in Port Sudan, causing 29 injuries, following deadly violence in the city between the Beni Amer and Nuba over the past months.

Finally, violence continued in South Sudan, with a number of clashes involving irregular youth militias. In the disputed Tonj state, fighting over the renaming of a county on December 11 killed at least nine, while three more died in clashes between the Pakam and Rup Dinka clans near Rumbek on December 8, where youth militia fired upon the vehicle of the governor who was attempting to mediate. Fighting also occurred in Maiwut county close to the Ethiopian border, as Sudan People’s Liberation Movement-in-Opposition (SPLM-IO) forces guarding a barge transporting goods from Nassir to Jikou were engaged by Cie-waw militia, resulting in at least 7 deaths. The area has been a hotspot for intra-rebel violence this year, and culminated in the defection of a commander to the government in early Autumn. 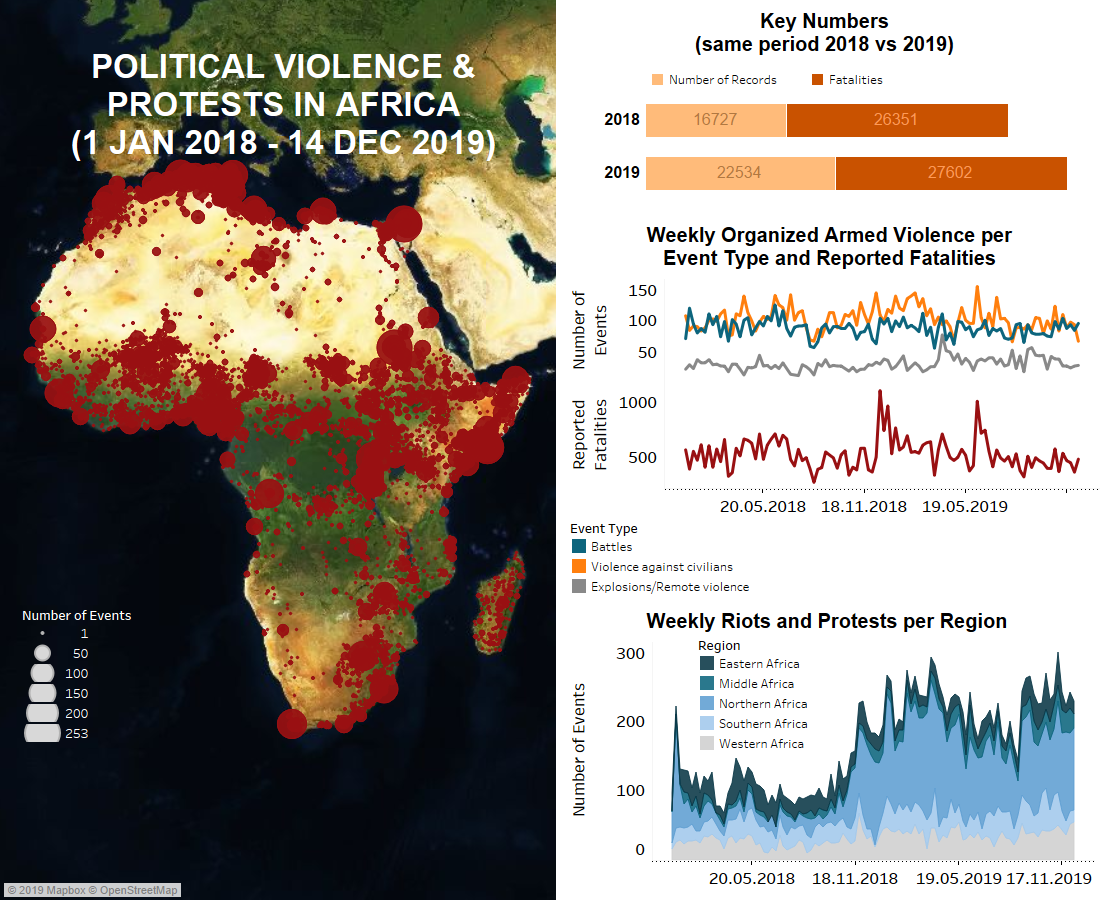