Last week in the Middle East, the widespread demonstration movements across Lebanon and Iraq continued. Fighting with rebel forces increased in Iraq, Syria, and Yemen. In Israel, a third round of elections was set for March 2020.

In Lebanon, anti-government demonstrations continued across the country. Like prior weeks, demonstrations remained peaceful for the most part as demonstrators continue to demand a new government of independent experts. However, clashes on Saturday night were reportedly the most violent since the demonstrations began. Security forces used tear gas and rubber bullets to disperse demonstrators in central Beirut. Nearby, clashes erupted between security forces and members of Hezbollah and the Amal Movement. These two events resulted in dozens of injuries (Daily Star, 17 December 2019). Supporters of Hezbollah and the Amal Movement have reportedly attacked security forces and protesters repeatedly with minimal intervention or accountability (Al Jazeera, 16 December 2019).

In Iraq, demonstrations continued and were generally more peaceful than in prior weeks (ACLED, 23 October 2019). However, there was a notable increase in the targeted assassinations of activists and demonstrators, as well as in forced disappearances. In Baghdad, according to initial reports from Iraqi officials, a 16-year old opened fire at shops and demonstrators, killing six demonstrators (AP, 16 December 2019). Demonstrators reportedly retaliated by stabbing the attacker, stripping him, and hanging him from a traffic light. However, there is a lot of speculation surrounding the gunman’s motives as well as the details of this event. Media sources have later reported that the 16 year-old fired into the air and that no one was killed other than the young man (Middle East Monitor, 13 December 2019). There were also reports that police were present and did nothing to intervene in the lynching. With the general state of chaos that currently reigns in Baghdad, this event has raised concerns that demonstrators may increasingly resort to lethal violence.

Moreover, pressure is building on Iraqi authorities to identify and put a stop to further attacks on military camps housing US forces, following three additional attacks last week (Reuters, 16 December, 2019). Two attacks targeted military bases near the Baghdad airport and the third targeted Al Qayyarah Airport in Ninewa province, both of which left a number of Iraqi soldiers injured. These attacks greatly contribute to heightened tensions between Iran (the alleged arregessor in the attacks) and the US. They also support speculations that Iraq may become the battleground for a proxy war between the two states — a speculation that contributed to the nationwide demonstrations in Iraq, which began 1 October.

The Islamic State (IS) once again intensified their attacks last week, particularly in Kirkuk and Diyala provinces. However, their most prominent attack was on the Popular Mobilization Forces (PMF) in Samarra in Saladin province, which reportedly killed at least 11 PMF fighters. This is one of their most damaging attacks on the PMF in recent months, hinting at a possible revival of IS and potential intensification of their attacks (Al Ghad Press, 10 December 2019).

In Syria, a tenuous pattern continued in northern Al Hasakeh and Raqqa provinces in and along areas controlled by Turkish-led Operation Peace Spring (OPS) forces. Russian, Syrian government, and American military forces all carried out patrols while Syrian government forces completed their deployment along the Aleppo-Al Hasakeh highway, as stipulated under an agreement with Turkish forces and brokered by Russia. VBIED and shelling attacks also continued with several deadly attacks in both OPS and QSD (Syrian Democratic Forces) held areas.

Clashes in southern and eastern Idleb province between regime and allied forces and rebel fighters led by HTS (Hayat Tahrir Al Sham) fighters intensified during the week. The strategic defunct Air Defense Base in eastern Idleb province was captured by HTS and rebel fighters after several days of fierce fighting. While the number of airstrikes by Syrian government and Russian planes dipped from previous weeks, ground shelling continued at an intense pace across northwestern Syria.

In Yemen, in yet another violation of the ‘Riyadh Agreement’, the 30-day requirement for the formation of a new cabinet has passed. With the delay in implementation of the agreement, security disturbances in the South have continued. Infighting between anti-Houthi forces has largely continued in Abyan and Taizz governorates. The majority of shelling in Yemen continues to take place in Hodeidah, despite the creation of five ceasefire observation posts by the UN Mission to Support the Hodeidah Agreement (UNMHA).

Furthermore, Ad Dali has been the site of significant fighting as anti-Houthi Southern Resistance forces fought pro-Houthi units extensively in the northern parts of the governorate. Taizz, likewise, experienced significant fighting between joint anti-Houthi forces and pro-Houthi forces. Pro-Houthi forces also lost territory to coalition-supported pro-Hadi forces in Abyan and Al Jawf governorates. Meanwhile, assassination campaigns by unidentified armed groups continue in Aden, albeit at a lower scale compared to the week prior. 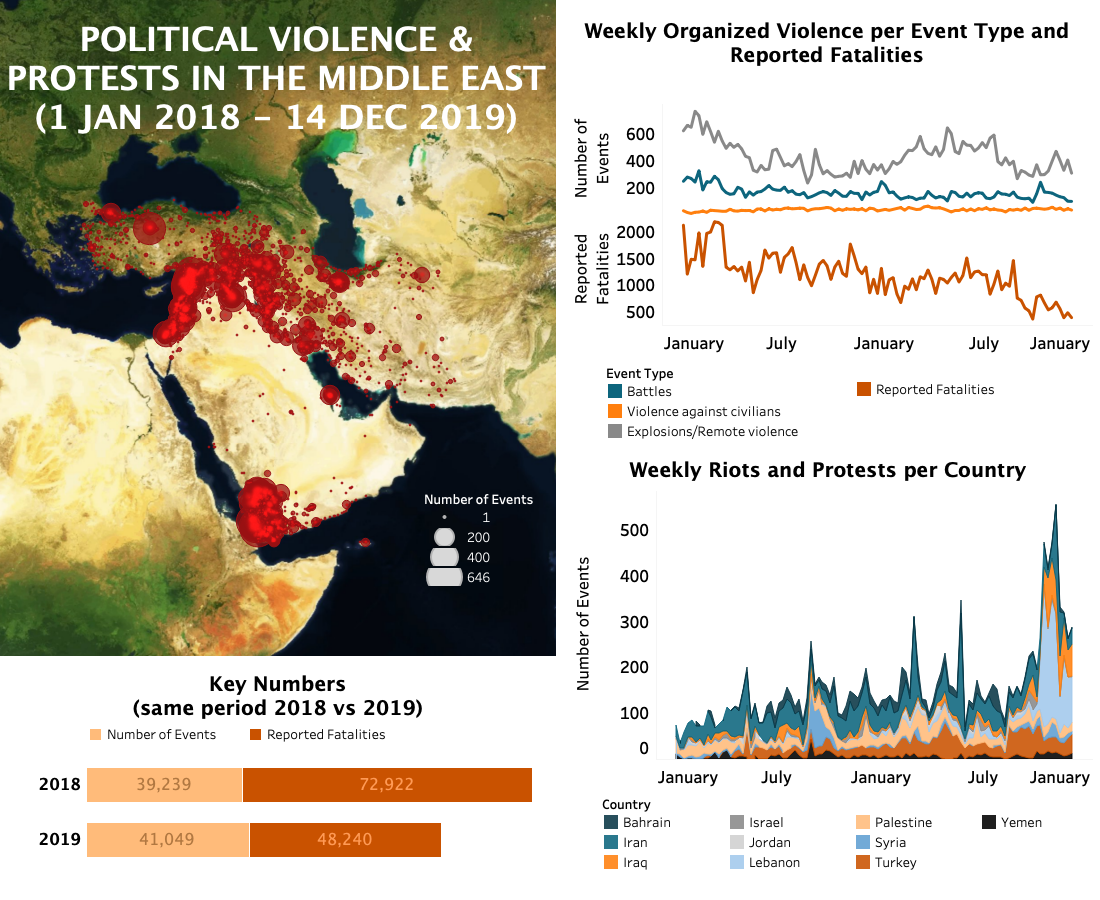