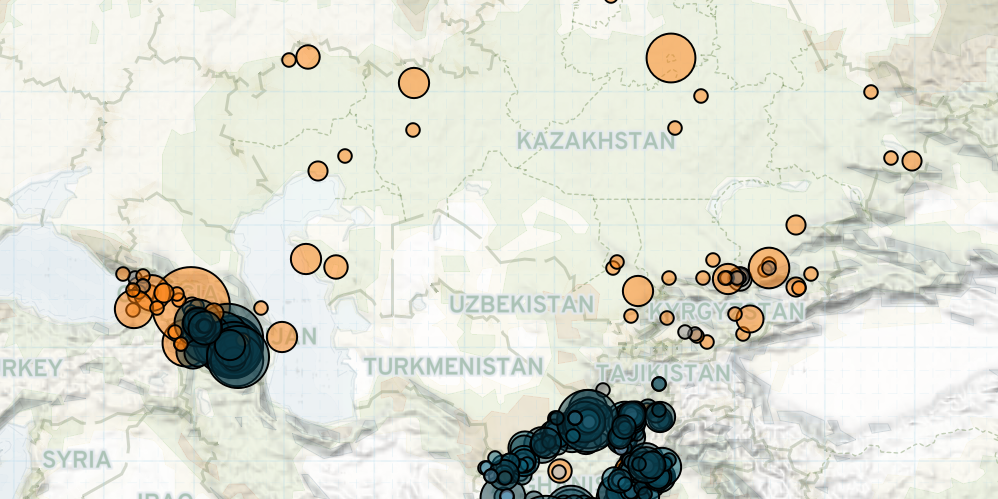 Last week in Central Asia, key developments include a crackdown on opposition protests in Kazakhstan; demonstrations against Chinese investment in Kyrgyzstan; and post-election disputes in Afghanistan, as the United States and the Taliban agree to a reduction of violence. In the Caucasus, ceasefire violations between Armenia and Azerbaijan continued at slightly higher levels.

In Kazakhstan, the Democratic Party of Kazakhstan (DPK) and the banned opposition group Democratic Choice of Kazakhstan (DVK) held rallies in Nur Sultan on 22 February. Smaller protests were also reported in Almaty, Aktobe, and Shymkent cities. On 17 February, ahead of the rallies, a DPK member’s car was set on fire, and three DPK members were detained on unspecified charges the next day (Vlast, 17 February 2020). On 21 February, police forces detained the DPK leader, Zhanbolat Mamay, without public charges. The DPK is yet to be officially registered due to restrictions on the establishment of political parties in Kazakhstan (The Diplomat, 19 February 2020). Since the party was founded in October 2019, its members have sporadically faced police investigations and its meetings have been disrupted in multiple cities (RFE/RL 24 November 2019). The detention of the DPK leader did not stop protesters from gathering in Nur Sultan and Almaty cities on 22 February, though police forces outnumbered the demonstrators and detained dozens (Reuters, 22 February 2020). DVK supporters also attempted to gather in Nur Sultan on the same day and were dispersed by police forces as well.

The crackdown raised questions as to the sincerity of President Kassym-Jomart Tokayev’s recent pledge to loosen the legislation on public demonstrations in Kazakhstan. The promised reforms had already drawn suspicion because of his ties to the former president, Nur Sultan Nazarbayev (ACLED, 10 January 2020).

Meanwhile, in Kyrgyzstan’s Naryn region, which neighbors China, a massive protest took place in At Bashi town against a Chinese logistics hub project (RFE/RL, 17 February 2020). On 17 February, locals gathered as part of a series of protests that started in January 2020, claiming that the project would eventually lead to a land grab by Chinese investors. On the same day, the Chinese company leading the project stated that “it was impossible to work on a large, long-term project when a part of local population opposes it” and pulled out of the venture (Reuters, 18 February 2020). Anti-Chinese sentiments in the region have flared over the past year, occasionally leading to violence targeting Chinese nationals working in regional projects (Eurasianet, 7 August 2019).

In Afghanistan, incumbent President Ashraf Ghani has been declared the winner of last September’s presidential election after thousands of votes were recounted and audited amidst allegations of fraud. The Afghan Independent Election Commission announced that Ghani secured 50.6% of votes, while Afghanistan’s Chief Executive Abdullah Abdullah came in second with 39.5% (AP, 18 February 2020). The two politicians have shared power since 2014 in a unity government brokered by the US, but their partnership has been fraught with disagreement. Abdullah is contesting the final election results and has announced that he will form a parallel government. He has, in the meantime, replaced the governors of Sar-e Pol, Baghlan, and Jowzjan provinces. The United Nations Assistance Mission in Afghanistan has expressed concern over “the events that are ongoing to replace government officials” and warned that this could jeopardize the peace process (TOLOnews, 22 February 2020; TOLOnews, 23 February 2020). The political dispute comes as a seven-day reduction in violence between US and Taliban forces took effect on 22 February; the two sides are expected to sign a peace deal on 29 February. Broad political consensus in Kabul is critical ahead of the intra-Afghan peace talks, and the deepening political crisis will likely weaken the position of the Afghan government at the negotiating table with the Taliban.