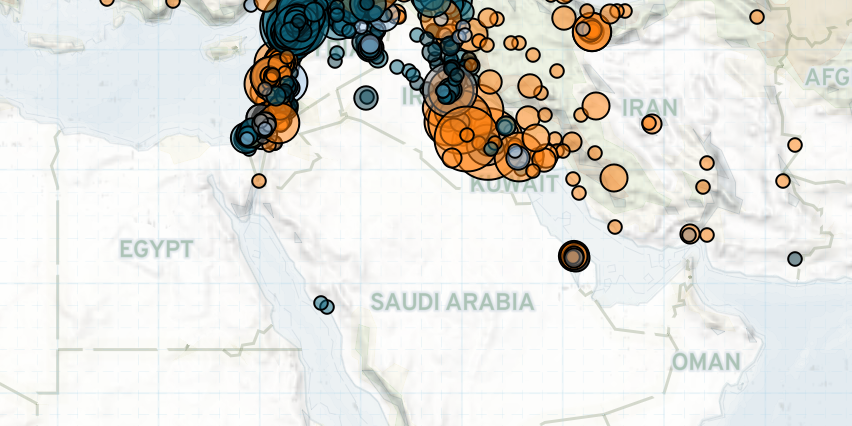 Last week in the Middle East, key developments include: escalating confrontations between Turkish and Syrian regime forces, major clashes in Yemen, Islamic State (IS) attacks in Iraq, a two-day flare-up between Palestinian Islamic Jihad (PIJ) and Israel, and demonstrations related to the coronavirus outbreak in Iran.

In Syria, tensions between the Assad regime and Turkey culminated in an airstrike on 27 February that targeted a Turkish position near Idleb’s Balyun village, reportedly killing 34 soldiers. In response, Turkey began a campaign of drone strikes and artillery fire on numerous regime and allied positions in northwestern Syria. While details remain unclear at this stage, multiple sources suggest that Russian forces, Lebanese Hezbollah, and pro-Iran militia groups were among the targets. Turkish F-16 fighter jets also reportedly engaged targets from Turkish airspace, including Syrian army positions, convoys, and defense systems near the frontlines. Syrian air and army bases in Idleb, Aleppo, Lattakia, and Hama were targeted as well, with multiple regime and/or Russian aircraft reportedly shot down. Turkey’s strikes came in support of a counter-offensive launched by opposition and Islamist factions, dubbed “Operation Spring Shield,” which has resulted in several territorial gains for the Islamist factions. These gains have included the key town of Saraqab, which has effectively re-cut the M5 highway for the time-being (Hurriyet Daily, 2 March 2020). According to Turkey, the operation’s aim is to reverse regime advances made since December 2019 and to reconfigure the map of territorial control conceived by the September 2018 Sochi Agreement between Turkey, Russia, and Iran.

Turkey has also lifted restrictions on the flow of refugees into Europe in response to the attack, mainly via Greece. While there are no accurate numbers at this stage, it has been reported that thousands of refugees have reached the borders of Greece as of 3 March and that over a thousand refugees have already entered Greece via land and/or sea (Foreign Policy, 3 March 2020). In response, several countries have heightened security along their borders with Turkey, including Greece and Bulgaria (The Guardian, 28 February 2020).

A high-level US delegation visited Turkey on 2 March to hold talks on the mounting tensions in Idleb, following US statements that it stands firmly behind its NATO ally. This comes ahead of an anticipated meeting between Turkish and Russian leaders on 5 March. (Anadolu Agency, 2 March 2020). Demonstrations were held by NGOs and citizens in the Turkish cities of Istanbul, Usak, Sivas, Malatya, Diyarbakir, Bolu, and Karabuk to protest the attack against Turkish forces and to support the army.

Meanwhile, in Yemen, major clashes between pro-Houthi and anti-Houthi forces occurred in Ad Dali, Al Jawf, Sadah, Sanaa, and Taizz. On Sunday, pro-Houthi forces claimed to have taken control over major areas of Al Jawf governorate, including the entire frontline in Al Ghayl district, as well as the provincial capital, Al Hazm. Taking Al Jawf helps to solidify the northern entrance to Sanaa and allows the Houthis to redirect forces towards fighting in Marib and Sanaa governorates. The Saudi-led coalition continued to launch frequent airstrikes during the week, mostly focusing on frontlines in Al Bayda, Al Jawf, Marib, Sadah, and the Nihm district of Sanaa governorate in addition to the city itself. Most indirect artillery fire continues to occur in Hodeidah governorate, with multiple shelling events recorded daily, in addition to shelling along other major frontlines.

The ‘Riyadh Agreement’ remains at an impasse as members of the Southern Transitional Council (STC) continue to describe implementation as counterproductive, blaming the pro-Hadi government for its failure (Aden al Ghad, 1 March 2020). Other agreements in Yemen have occurred on an ad hoc basis in local contexts, in some cases with limited numbers of prisoners transferred between sides. Overall, security in the south continues to deteriorate due to the failed implementation of these agreements: ACLED recorded the killings of six civilians in Aden governorate throughout the last week.

IS forces claimed an attack on pro-Houthi forces in the area of Al Qayfa, northwest Al Bayda governorate, last week as well. However, despite the attack, IS activity in Yemen remains limited for the second straight week. Al Qaeda in the Arabian Peninsula (AQAP) did not claim any activity in Yemen despite the announcement of a new leader, Khalid Batarfi, last week.

Clashes between IS and security forces also intensified in Iraq. Iraqi security forces reportedly killed 39 IS militants in one operation in northern Saladin province (Kurdistan24, 26 February 2020). Overall, IS activity in Iraq has been steadily rising, with militants targeting both civilians and security forces, particularly in Diyala province and disputed areas in Kirkuk province. One unusual attack reportedly left three fighters from the Tribal Mobilization Forces (TMF) dead northeast of Baghdad (Xinhua, 29 February 2020). These events further a pattern of randomized attacks on areas with security voids that are being met with continuous counterinsurgency campaigns by state forces targeting IS and their infrastructure.

Moreover, demonstrations continued last week as Prime Minister (PM) Mohamed Allawi announced his cabinet, though it was later not approved by lawmakers in parliament, prompting Allawi to step down (Reuters, 2 March 2020). This leaves Iraq in a position of political uncertainty. If the political elite do not present a viable independent candidate for PM, this could lead to further instability.

Between 23 and 24 February, approximately 80 rockets were fired at Israel by PIJ, after two of its members were killed by Israeli airstrikes in Syria (BBC, 24 February 2020). Though reports note that the PIJ attacks resulted in no injuries and only in minor physical damage, they led to a demonstration in the Israeli communities that border the Gaza Strip, with residents calling for a stronger approach to deal with PIJ violence. In response, a number of PIJ and Hamas positions were bombed by Israeli warplanes. On 24 February, PIJ declared a ceasefire. This is the second flare-up with Israel in recent months where Hamas was not involved, despite attacks targeting its positions.

Israeli military forces also shot and killed a Palestinian on the border with Gaza who was reported by Israeli media to be a PIJ militant planting a bomb. A video of Israeli forces dragging the body with a bulldozer was shared on social media, prompting large clashes between Palestinians and Israeli forces across the West Bank. Hundreds of Palestinians were injured during these clashes, some by live fire, others by rubber bullets and tear gas. Meanwhile, in Beersheba, thousands of Israelis demonstrated to demand the release of two Israeli prisoners and two bodies of Israeli soldiers from Hamas in the Gaza Strip.

Furthermore, in Iran, medical staff held multiple protests over shortages of protective medical gear, while students, prisoners, and families of soldiers demonstrated and requested to be sent home due to the coronavirus outbreak. One violent incident was reported in Bandar Abbas, where demonstrators tried to set a hospital on fire due to rumors that it was being used as a quarantine site.