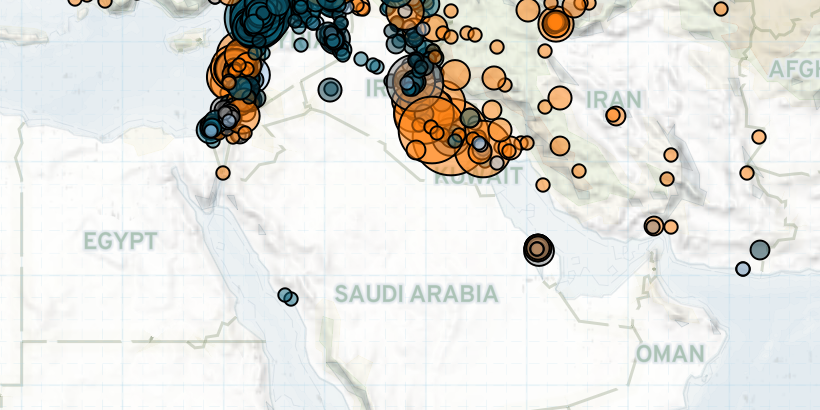 Last week in the Middle East, key developments include: major fighting in Yemen; a lack of political leadership in Iraq amid ongoing demonstrations, and rising Islamic State (IS) activity; a ceasefire agreement between Turkey and Russia in Syria; inconclusive Israeli elections; and a spike in protests around the region.

In Yemen, Houthi forces continued their offensives in Al Jawf governorate, making major territorial gains. Fighting displaced tens of thousands of people as Houthi forces took over the provincial capital of Al Jawf, Al Hazm, and other significant areas, including the Labinat military camp (Al Jazeera, 7 March 2020). Heavy fighting was also reported in Ad Dali, although no substantial territory was exchanged. The Saudi-led coalition launched at least 200 airstrikes during the week, mostly focusing on frontlines in Al Jawf, Hajjah, Marib, Sadah, and Sanaa governorates. Hodeidah continued to be the site of the most artillery fire, with daily shelling reported throughout the governorate. It also was the location of a number of armed clashes between pro- and anti-Houthi forces, in addition to one Saudi-led coalition airstrike.

With the stalled implementation of the ‘Riyadh Agreement,’ the security situation has quickly deteriorated in south Yemen. Pro-Southern Transitional Council (STC) forces reportedly prevented the movement of pro-Hadi and Saudi military forces in Aden and arrested 300 pro-Hadi soldiers in Lahij. A number of clashes were recorded between security forces in Aden governorate in addition to multiple assassination attempts. The instability extended to Shabwah and Lahij governorates, where fewer clashes were reported compared to Aden.

IS did not claim any activity in Yemen last week, though Al Qaeda in the Arabian Peninsula (AQAP) is suspected of carrying out an attack in Shabwah governorate. Besides this attack, AQAP has not claimed any armed activity in Yemen since 12 February 2020. Nevertheless, local sources claim that new US forces have been deployed to Shabwah to fight AQAP (Al Khabar Al Yemeni, 7 March 2020).

In Iraq, there is still no clear replacement for Prime Minister-designate Mohamed Allawi following his withdrawal from the post after failing to form a government within the constitutionally mandated 30-day period. The situation is further exacerbated by the power struggle between the Iranian-backed Shiite blocs in parliament and the Kurds and Sunnis, while demonstrations calling for an independent candidate continue (Al Monitor, 5 March 2020). Two demonstrators were reportedly killed at demonstrations last week. Against the backdrop of this political void, there is an increase of IS activity and a general increase in violent events targeting civilians, particularly in Diyala province, which also suffers from a security gap. The rise in violence can be partly attributed to the visible decrease in operations by the Popular Mobilization Forces (PMF), which are divided over the appointment of a new leader (Just Security, 4 March 2020). The political crisis is further aggravated by the outbreak of coronavirus. Iraq’s health system has been weakened by years of war, sanctions, corruption and neglect (BBC, 5 March 2020). Without clear political leadership this may have serious implications for Iraq’s ability to contain the spread of the disease.

Meanwhile, regime and allied forces continued to clash with opposition and Islamist factions in northwest Syria until 6 March, when a ceasefire agreement brokered by Turkey and Russia came into effect. The terms of the agreement are: (1) the cessation of all military actions along the line of contact in the Idleb de-escalation area beginning 6 March 2020; (2) the establishment of a security corridor 6 km to the north and 6 km to the south of the M4 highway;  and (3) on 15 March 2020, the commencement of joint Turkish-Russian patrols along the M4 highway beginning 2 km to the west of Saraqib until the settlement of Ain Al Hayr (BBC, 6 March 2020).

Accompanied by Russian Military Police, Turkish troops rescued numerous wounded soldiers from hard-to-reach areas after the ceasefire came into effect and evacuated them to Turkey. President Erdogan said that the Turkish military reserves the right to retaliate against any regime attacks. While the ceasefire continues to largely hold, a number of artillery attacks by regime forces and some sporadic clashes were reported along the current contact lines. Less than 48 hours before the agreement came into effect, Russian airstrikes targeted an informal IDP camp in Idleb’s northern countryside, reportedly killing 15 IDPs and wounding at least 20 more (Al Jazeera, 5 March 2020).

Several key issues concerning the agreement remain ambiguous. Under the 2018 Sochi agreement, Turkey is obligated to have control over Islamist factions to ensure that they do not violate the ceasefire. As long as Turkey does not implement effective measures toward resolving that issue, a resumption of hostilities by the regime and allied forces will continue to loom over Idleb. The question of the displaced population has also remained unanswered, as the current agreement takes no steps to prevent further displacements should hostilities resume or to safeguard the nearly one million currently displaced along Turkey’s border. Furthermore, the future of Turkey’s observation outposts east of the M5 highway remains unaddressed. Given the current state of territorial control, however, as well as increasingly unlikely regime withdrawals, a gradual evacuation of a number of Turkish outposts located east of the M5 seems likely amid broader expectations that violence will re-erupt.

Elsewhere in the Middle East, high numbers of demonstrations occurred. Almost 90 demonstration events took place against the political system in Lebanon, most of which were peaceful. In Turkey, over 50 peaceful protest events took place supporting Turkish military operations in Syria. Multiple anti-regime protests and riots were reported in Bahrain, mainly to mark the anniversary of Saudi and Emirati security forces entering the country to help put down unrest in 2011. In Iran, demonstrations were predominantly related to wage-related labor issues or to government mismanagement of the coronavirus outbreak.

Israel held another election, but has still not formed a government, yet again. This is Israel’s third election since the government was dissolved at the end of December 2018, with the last two votes resulting in political stalemates.