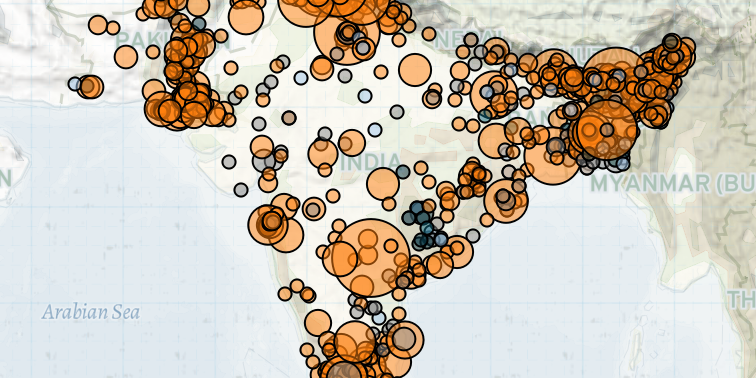 Key trends in South Asia last week include: continuing communal violence in India following clashes over the Citizenship (Amendment) Act, 2019 (CAA); violence leading up to local elections in India and Bangladesh; organized violence involving domestic rebel groups in Pakistan, Nepal, and India; violence against protesters on International Women’s Day in Pakistan; and demonstrations against the state’s response to containing the spread of the coronavirus in India and Sri Lanka.

In India’s Tamil Nadu state, communal violence between Hindus and Muslims continued following an assault on a member of a Hindu religious organization while returning from a pro-CAA rally the week before. The office of the Hindu religious organization was vandalized and an activist of the right-wing Hindu nationalist volunteer organization Rashtriya Swayamsevak Sangh (RSS) was assaulted by a mob. A local leader of the Social Democratic Party of India (SDPI), a party linked to the Islamist Popular Front of India (Outlook, 12 September 2017), was attacked in retaliation for the attacks on Hindu activists. The controversial act, which has been criticized for being discriminatory towards Muslims, has divided opinions and has sparked nationwide demonstrations in favor of and against the Act since it was introduced last December. The demonstrations turned into communal riots and religious violence following provocative speeches by Bharatiya Janata Party (BJP) leaders leading up to and after state assembly elections in the capital, Delhi (Hindu, 26 February 2020).

Incidents of electoral violence were also reported in India as well as in Bangladesh during the run up to local elections. In India’s Andhra Pradesh, opposition parties — including Telugu Desam Party (TDP), BJP, and Jana Sena Party (JSP) — accused the state’s ruling party — Yuvajana, Sramika, Rythu Congress Party (YSRCP) — of violence, intimidation, and obstructing their candidates from filing nomination papers for the local panchayat and municipal elections. The YSRCP activists reportedly abducted a TDP candidate in Kadapa district to prevent him from filing his nomination; meanwhile, several attacks on activists and candidates of TDP, BJP, and JSP were reported throughout the state. In Bangladesh, two factions of the ruling Awami League (AL) party clashed during an election campaign for Chittagong City Corporation elections.

Last week, several countries in South Asia reported a slight increase in organized violence by domestic rebel groups. Incidents of remote violence were reported in India, Pakistan and Nepal. In India’s Chhattisgarh state, two security personnel were reportedly killed in an IED explosion triggered by Naxal-Maoist rebels. In Pakistan’s Khyber Pakhtunkhwa province, a Tehreek-i-Taliban Pakistan (TTP) commander was reportedly killed in an explosion. In Nepal’s Bhaktapur district, a Maoist outfit led by Netra Bikram Chand reportedly detonated a bomb at the house of the former Minister for Communications and Information Technology. Properties were damaged in the incident. The Minister recently resigned following the leak of an audio clip in which he is heard negotiating kickbacks during the procurement process of the security printing press for the government (Himalayan Times, 21 February 2020).

Meanwhile, in the northeastern state of Meghalaya, cadres of United Liberation Front of Assam-Independent (ULFA-I) exchanged fire with security personnel. There were no casualties reported in the incident. A peace agreement aimed at providing respite from five decades of militancy for separate statehood in Bodo-dominated areas of northeastern India (India Today, 27 January 2020) was signed in January. Following the peace agreement all four factions of National Democratic Front of Bodoland (NDFB) have disbanded their respective organizations. However, ULFA-I, who were not a part of the agreement, remains the largest militant outfit in Assam and aims to continue their struggle to create a sovereign state (Hindustan Times, 29 January 2020).

Demonstrations for women’s rights were held across Pakistan on International Women’s Day on March 8. In Pakistan’s capital, Islamabad, participants of a demonstration affiliated with a conservative religious party, Jamiat Ulema-e-Islam-Fazl (JUI-F), assaulted protesters participating in the women’s march. The women’s march was held for the third year running under the slogan “My body, my choice.” Conservative groups, including the JUI-F and Jamaat-e-Islami (JI), have criticized the slogan and the march itself for threatening traditional Muslim values (Gandhara, 8 March 2020). Elsewhere, several demonstrations, at times violent, were recorded in India and Sri Lanka over the state’s response to containing the spread of the coronavirus. In India’s Jammu and Kashmir, locals demonstrated against the establishment of isolation wards for people suspected of coronavirus infections in public rest houses. Similarly, in Sri Lanka’s Batticaloa and Vavuniya districts, several demonstrations were reported against the establishment of quarantine facilities. Demonstrators attacked an ambulance and a hospital for transporting patients infected with the virus.