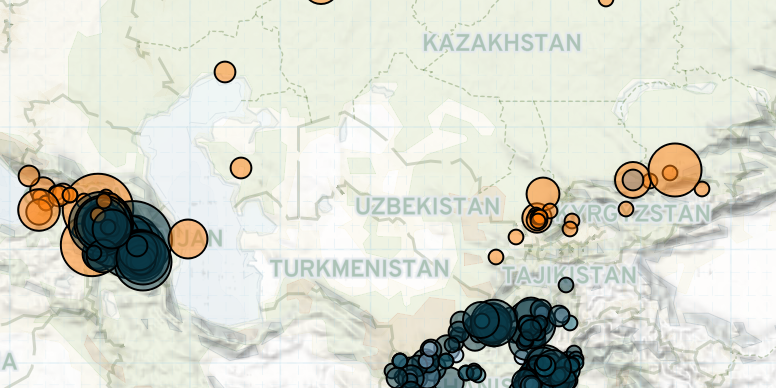 Last week in Central Asia and the Caucasus, the Taliban increased attacks on Afghan forces while also conducting an operation against the Islamic State Khorasan (IS-K) in northeastern Kunar province. In Kazakhstan, Georgia, and Uzbekistan, protests took place over government measures to combat the coronavirus outbreak, in addition to further demonstrations over property rights in Uzbekistan. At the same time, ceasefire violations continued between Armenia and Azerbaijan.

Violence continued to rage in Afghanistan last week as Taliban forces steadily increased their attacks on Afghan pro-government forces. In one of the deadliest assaults since the signing of the US-Taliban peace agreement, at least 25 Afghan soldiers and policemen were killed by eight Taliban infiltrators in an insider attack on a checkpoint in the province of Zabul. Afghan officials have warned that security forces will end their current defensive posture, as there has been no sign that the Taliban is willing to reduce violence against the government (TOLOnews, 20 March 2020). The US-Taliban agreement offers no explicit protection to Afghan forces, though the Taliban has pledged under the accord to prevent threats to the “security of the US and its allies.” In return, the agreement calls for the withdrawal of foreign troops in 14 months, a process which started the first week of March. However, there are concerns that the coronavirus could slow down the departure of troops. Last week the commander of US operations in Afghanistan announced a temporary pause in the movement of personnel due to quarantining (US News, 19 March 2020). On 24 March, it was announced that four service members in the US-led NATO coalition have tested positive for coronavirus, and 38 others are showing flu-symptoms (The Hill, 23 March 2020); this may further delay withdrawals.

Returning from a visit to Afghanistan on 23 March, US Secretary of State Mike Pompeo said that the US would continue to withdraw its troops from Afghanistan as the Taliban was honoring its commitments to refrain from attacking US targets. But he did not address continued Taliban attacks on Afghan forces (BBC, 24 March 2020). Pompeo’s visit was aimed at brokering a political power-sharing deal between internationally-recognized Afghan President Ashraf Ghani and his rival Abdullah Abdullah. However, as no progress was made, Pompeo announced that the US government will cut $1 billion in aid to the country, effective immediately, and will reduce its assistance to Afghanistan by another $1 billion in 2021 if no inclusive government is formed. Pompeo said that Washington, however, will continue assisting Afghanistan to fight the spread of the coronavirus by providing $15 million in assistance (CNN, 23 March 2020). A total of 42 confirmed cases of coronavirus have been reported in Afghanistan already. The true number is likely much higher as testing is very limited, with just one lab able to analyze tests in the country (The Hill, 23 March 2020). The spread of the virus has also made the prisoner swap between the Taliban and Afghan government more urgent, a provision under the US-Taliban agreement that has become contentious. On 22 March, the Afghan government and the Taliban held their first talk about the prisoner swap via Skype amid the coronavirus pandemic, and further negotiations are planned for this week (RFE/RL, 22 March 2020).

In another development, the Taliban announced that its forces conducted a large-scale operation against IS-K in Kunar over the first two weeks of March, clearing the province of the rival insurgent group (Voice of Jihad, 14 March 2020). IS-K lost its stronghold in Nangarhar in November 2019, and it is believed that many of its fighters had sought refuge in Kunar. US officials, while cautioning that gains against IS-K might be overstated, have confirmed that “the Taliban’s campaign against ISIS-Khorasan in Kunar province is consistent with Taliban public statements to rout the group from Afghanistan” (VOA, 20 March 2020). Security analysts warn, however, that losing territory does not mean an end to IS-K activities in Afghanistan (New York Times, December 2019). The group has continued to launch some of the deadliest attacks on civilians in the country, including an assault on a memorial ceremony of a Hazara leader in Kabul on 6 March, which reportedly killed 32 people (Reuters, 6 March 2020).

Meanwhile, demonstrations broke out in a number of countries across Central Asia and the Caucasus as governments continued to institute measures aimed at curbing the spread of the coronavirus during the past week. In Georgia, minibus drivers protested in Gujaani on 19 March and in Tbilisi on 20 March, asking the government to develop a subsidy plan to address their potential losses during the crisis. Similarly, on 16 March, open market traders held a protest to demand they be exempted from rent payments.

In Kazakhstan, with the largest cities, Nur Sultan and Almaty, under lockdown, bulk-buying and increasing prices caused problems in some stores, pushing the government to take measures to limit the economic impact of the coronavirus crisis (Eurasianet, 18 March 2020). A protest was reported on 21 March in northeastern Pavlovdar city, where tenants of the shops in a fair complex were not able to reach their products because it remained closed during the coronavirus outbreak, stopping them from making sales online. Tenants also complained that they had to pay rent during the time the complex remained close, causing them further financial struggles.

In Kyrgyzstan, on 21 March, quarantined Kyrgyz citizens protested at the observation facility near Manas airport in Bishkek city as a regulation change turned against them. Authorities allowed people who arrived in the country after 21 March to stay quarantined at their home while the protesters were detained in the facility even though they reportedly tested negative for the coronavirus.

Protests over the government response to the coronavirus outbreak also took place in Uzbekistan. On 19 March, a group of quarantined Uzbek citizens protested against poor conditions at the quarantine facility in Samarkand city, claiming that there was a shortage of food. A similar protest was reported in Tashkent on 18 March, with a group quarantined upon their arrival from Russia demonstrating against poor conditions at the quarantine building in Khujakent town outside Tashkent city.

In addition to these demonstrations, protests have also broken out over disagreements related to land taken by private developers in recent weeks, as a part of Uzbekistan’s infrastructure renewal plan. The plan has led to controversies as the people living and working in the affected areas had no say in the issue and claim to be under-compensated (HRW, World Report 2020, RFE/RL, 31 July 2019). On 15 March, a group of garage owners in Tashkent city protested against the demolition of 400 garages, claiming that the authorities failed to respect their property rights. On 17 March, residents of an apartment building in the city protested against the planned construction of another apartment complex in their backyard, demanding the Uzbek authorities investigate the legality of the project. Since the beginning of 2020, similar protests have taken place in the Yunusabad, Mirabad, and Mirzo Ulubek areas of the Tashkent region as well as in rural parts of the country (RFE/RL, 17 February 2020, 13 March 2020). State authorities remain determined to continue with the projects, in some cases leading to violent confrontations between police forces and demonstrators.