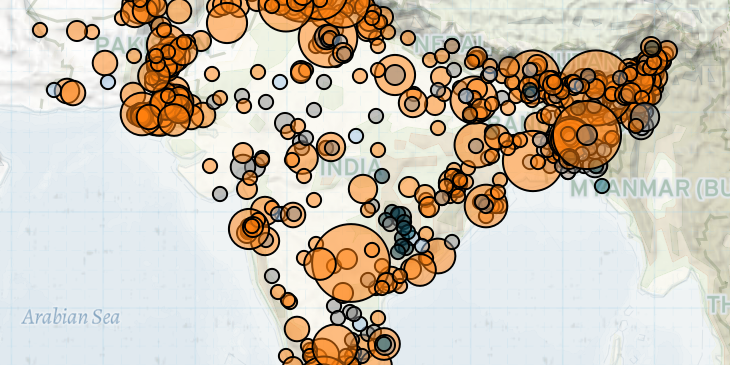 Key trends in South Asia last week include: continuing security operations against domestic rebel groups in India and Pakistan, and demonstrations over the spread of coronavirus across South Asia.

In India and Pakistan, security forces continued operations against domestic rebel groups. In India, several armed clashes were reported between security forces and Naxal-Maoist rebels in the states of Maharashtra and Chhattisgarh. Two Naxal-Maoist rebels were killed while at least seven security personnel were injured in the operations. The slew of clashes comes as security personnel intensified their combing operations in Naxal-Maoist strongholds, with an aim to gain an advantage before the expected increase in Naxal-Maoist attacks between April and July (Hindustan Times, 22 February 2020). In Jammu and Kashmir, a Hizb-ul-Mujahideen (HM) commander and three others affiliated with Lashkar-e-Taiba (LeT) were killed during a cordon and search operation (CASO).

Similarly, in Pakistan’s North Waziristan district, four security personnel and seven militants belonging to a faction of Tehreek-i-Taliban Pakistan (TTP) were killed during an intelligence-based operation. Despite several security operations over the years, militant factions of TTP maintain a presence both in the tribal districts of Pakistan and across the border in Afghanistan, and launch frequent attacks in areas close to the Pak-Afghan border (Dawn, 19 March 2020).

Last week, violent events and demonstrations were reported over the spread of coronavirus throughout South Asia. In Bangladesh, a man was killed, and 10 others were injured in a clash after arguments over coronavirus. In India’s Maharashtra state, a man was assaulted for sneezing in public without covering his face. In Sri Lanka, two inmates were killed and six others injured as prison guards fired at demonstrating prisoners after they attempted to escape, demanding release due to the threat of coronavirus.

Several demonstrations were held by locals in cities of Bangladesh and India against the establishment of quarantine facilities and isolation wards for people suspected of coronavirus infections in their neighborhoods. In Bangladesh, Nepal, and Pakistan, demonstrations were reported against the lack of proper measures to contain the spread of the virus. In Bangladesh, students demonstrated demanding suspension of academic activities in the wake of the virus outbreak. In Nepal, students demonstrated expressing dissatisfaction with the authorities for not using the proper equipment to test people for coronavirus symptoms. In Pakistan, health workers demonstrated in several provinces demanding safety kits and basic hygiene products, like hand sanitizers and safety masks. Also, demonstrations against artificially increased prices amid panic-buying due to the coronavirus outbreak were reported in Bangladesh, Pakistan, and India.